In conjunction with the launch of Despicable Me 2 last week, McDonald's launched a set of Minions for its Happy Meal Toys from 4 until 31 July 2013 on a weekly basis.

On 10 July 2013, McDonald's posted on its official Facebook page to announce the second series of Despicable Me 2 toys. The note reads:

After 12.01am, its Facebook timeline was flooded with frustrated customers who claimed that the Happy Meals would only be available at 7am, and not 12.01am as announced.

Among McDonald's stores involved were those in Penang, Tawau and Kampar. Disappointed customers demanded for an explanation from McDonald's for issuing misleading information on its Facebook page.

Customers' frustration continued to  snowball after midnight as no immediate response was received from the fast food giant.  McDonald's only responded later during the day,

When contacted by A+M, Melati Abdul Hai, head of marketing, McDonald's Malaysia, said, "We have actually brought in a larger quantity of stocks for this promotion compared to previous promotions. However, customer response to the promotion has been overwhelming."

A spokesperson of McDonald's said the issue was not supposed to happen as the guidelines given to all 24-hour stores stated that the Despicable Me 2 Happy Meals should be available at 12am.

McDonald's is currently investigating the respective stores that started selling only at 7am.

Rene Low of Emerald Communications said, it is important to take responsibility and quickly apologise for the mistake when they had made it clear on Facebook that the Happy Meals will be available at 12.01am and if they could not meet the market demand in time.

Quah Seng Chit, managing director of Spin Communications, said it is crucial for marketers to tackle complaints immediately and to make amends by taking it offline to make it personal, instead of letting it spread publicly on social media.

"It's a good thing that the Happy Meals are receiving overwhelming response but because of the lack of immediate response and explanation, the situation has just gone bad," said Quah.

Janitha Sukumaran, consulting director, Rantau PR, said, "By keeping silent when customers are bombarding social media channels with angry messages, it conveys a message that the management is either taking their displeasure lightly or is too helpless and undecided to offer a credible explanation and to make suitable amends."

Social media is often treated as an afterthought. In times of crisis, it is important for a brand to be transparent and to provide honest answers and solutions.

"They offered a "Deferred Fulfillment" option for people who really wanted the toys. So when angry consumers flocked to Facebook to vent their frustration they discovered, to their surprise, that a big brand actually listened to their feedback and took immediate steps to try and satisfy their customers." 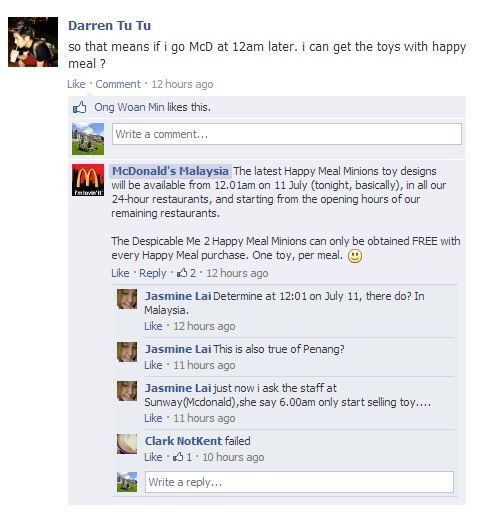 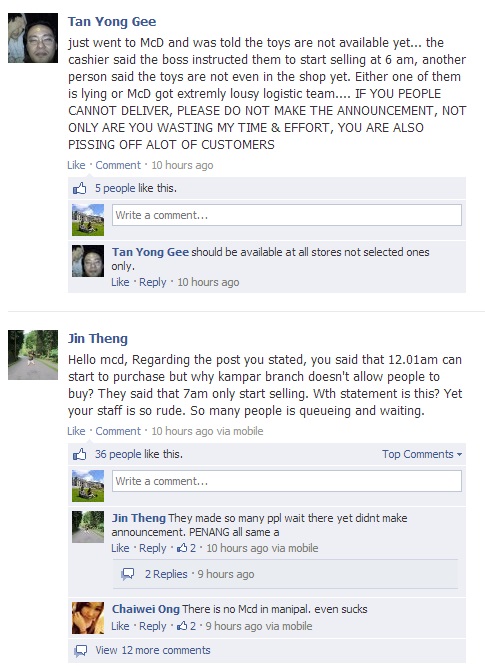 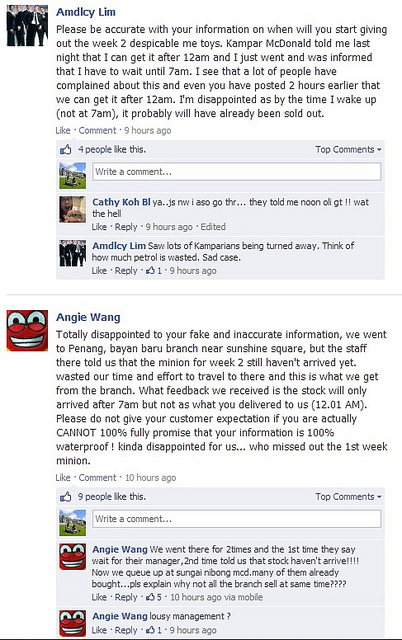