Evian has introduced its newly-designed PET bottle in Asia, which is sleeker and with cleaner lines.

The bottle sports a “label-less” look, of which the front features a simplified, elegant reduction of the previous logo design – a panorama of mountains which celebrates the water’s source in a corner of the French Alps.

Being an icon of the premium category globally, Evian wanted to renovate the brand so consumers would be reminded of the water’s purity and freshness. By bringing the giant snow dome to Singapore where consumers could enter it for a bit of pure fun and a winter-like experience, the brand wanted to remind them of the source of purity. 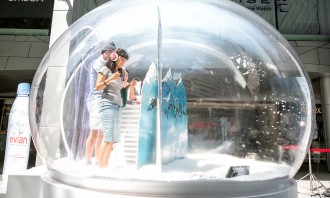 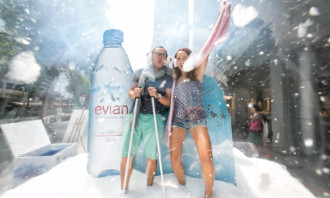 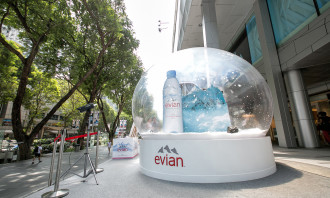 Alongside the Evian snow dome, the brand also ran a consumer promotion across Singapore. While the snow dome was up only from 31 March to 3 April, there are still on-going activations in-store that run until the end of April. This was further amplified with the help of digital platforms such as targeted websites and Facebook.

The Evian snow dome idea first emerged from Dubai, where Mindshare UAE developed the concept; then we brought the idea to Singapore and the brand engaged with Kingsmen Exhibits to build it in Asia, and also partnered with Carat Media. The cost of the execution is approximately SG$100K.

Japanese mobile ad network Mediba will be offering a mobile-specific demand side platform StrikeAd Fusion, which is headquartered ..

Ruder Finn continues to expand its China operations with another acquisition...

Optimistic outlook for 2018 retail sales in Hong Kong, to increase up to 6%

Positive outlook for the next five years, but winning retailers need to become game changers...

Titled 'Journey', the video by LTA follows a couple's journey through the decades with the familiar public bus in Singapore. ..

A competitor’s missed opportunity is a chance for you to gain a new business win...