Real Madrid fans, you are in for a treat.

One of the biggest football clubs in the world has joined hands with Emirates to plaster a huge Real Madrid decal on one of the airline’s A380 aircraft. Touching down in Madrid, the Emirates A380 has been emblazoned with the image of Real Madrid footballing giants: Cristiano Ronaldo, Gareth Bale, Sergio Ramos, James Rodriguez, Karim Benzema and Marcelo.

Visible on both sides of the aircraft, the decal shows the six players in action. The decal will stay on the aircraft for six months "traversing the globe to Emirates’ 36 A380 destinations," said the airline.

“There is no better way for us to celebrate our sponsorship of Real Madrid than by adorning one of our flagship A380’s with the club’s crest and team. Real Madrid have a huge following around the world and with our A380 now flying to 36 different destinations we hope that a good number of fans will get to see the aircraft,” Boutros Boutros, Emirates divisional senior vice president, corporate communications, Marketing and Brand, said.

The entire Real Madrid squad turned up at Madrid Airport Barajas to view the decal firsthand before the aircraft departed Madrid for Dubai. 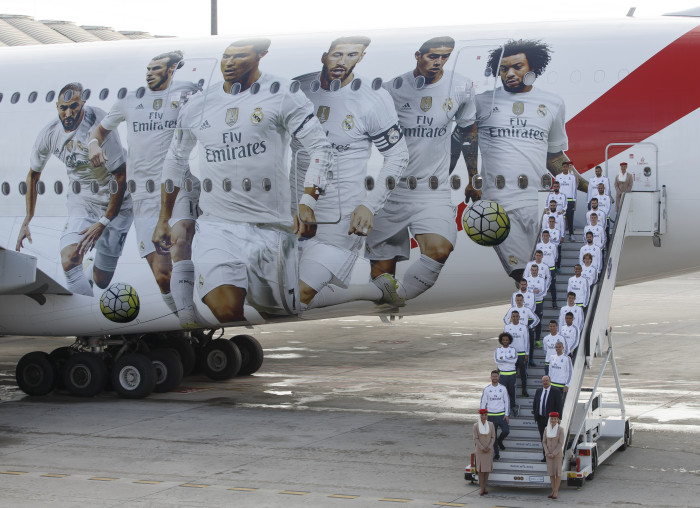 The aircraft is planned to travel to Hong Kong,Amsterdam and Frankfurt this week giving Real Madrid fans in these countries a chance to snap a picture of the aircraft as it makes its way around the globe.