We all know weather updates can get pretty boring online without the help of gorgeous weather girls (and boys!). But that is not something which has stopped @STcom, The Straits Times' Twitter platform for getting its news of the weather out.

The social media team decided to take on a more casual approach when announcing dreary weather updates. The results were fabulous.  Here's what we deduced about the social media person/persons.

1. The poster was likely a fan of Star Wars.

Weather update: Warm. Showers mainly over northern and eastern Singapore in the late afternoon.
"Warm" is also the sound a lightsaber makes.

2. And also of Rihanna's song "Umbrella".

3. He/she/they definitely had a penchant for puns.

4. And a good sense of humour.

Weather update: Thundery showers over many areas in the afternoon. What often falls but never gets hurt? Rain. Have a great day! — The Straits Times (@STcom) January 18, 2017

Weather update: Cloudy with periods of showers, heavy at times. Seems like a great day to walk your pet fish. Have a great Tuesday!

6. But one thing is for sure, the persona behind the weather update seems like a pretty chirpy person.

Weather update: Occasionally windy with passing showers in the afternoon. Can fly kite and then swim. Have an amazing #TGIF everyone! — The Straits Times (@STcom) January 26, 2017

7. And feels more like a friend telling you about the weather.

Weather update: Thundery showers over many areas in the afternoon. Remember your umbrellas! Or swimming attire.

A quick check by Marketing found that this was not always the case with ST's weather updates. And things were previously a little more serious. 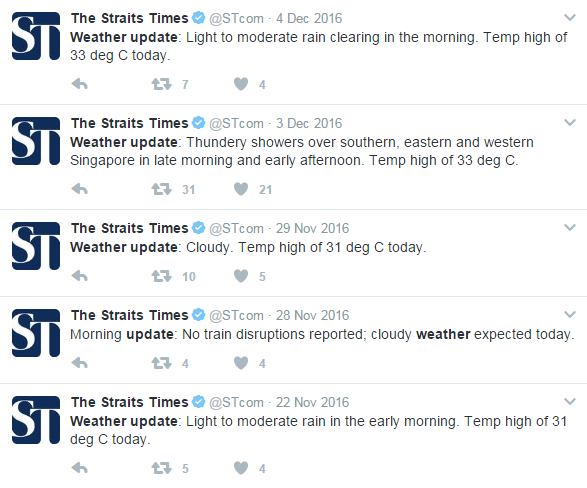 But one thing's for sure, Twitter users are loving the person behind these hilarious weather updates. We're still waiting to hear back from SPH on what spurred the creativity.

But meanwhile, kudos to SPH and The Straits Times for making us laugh...come rain or shine.

(Read also: Q&A with ST’s Witty Weatherman…and no, he is not an intern)