Chinese actress Liu, a naturalised US citizen, had shared a pro-Hong Kong police post on Chinese social media platform, Weibo. The post was an image from the Chinese state newspaper People’s Daily. Text in the image read “I also support Hong Kong police. You can beat me up now.” in Chinese, with an additional line in English saying, “What a shame for Hong Kong.” 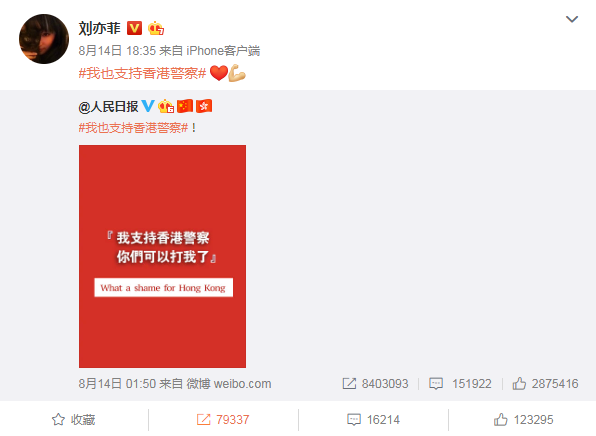 The quote in the social post referred to a statement made by Fu Guohao, a reporter for People’s Daily affiliate Global Times who was restrained and assaulted by several protesters at Hong Kong airport earlier this week due to his behaviour triggering suspicions he was a Chinese undercover police agent.

While Liu’s post received more than 100,00 likes on Weibo, thousands of netizens on Twitter – which is banned in China – responded with the trending hashtag #BoycottMulan. Twitter users accused Liu of supporting what they deemed excessive police force against protesters and also called out her stance as hypocritical in supporting the seeming repression of Hong Kongers’ demands for the freedoms she enjoys as an American citizen. This led to the call for a boycott of Disney’s live-action remake of Mulan, in which Liu has the title role, as well as the production of some supporting graphics that it’s pretty certain Disney is not going to be thrilled about making the rounds. The film is widely being looked at as a way for Disney to capitalise on China’s gigantic cinema-going market. 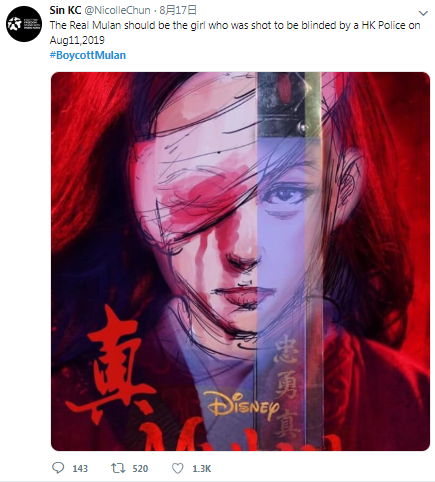 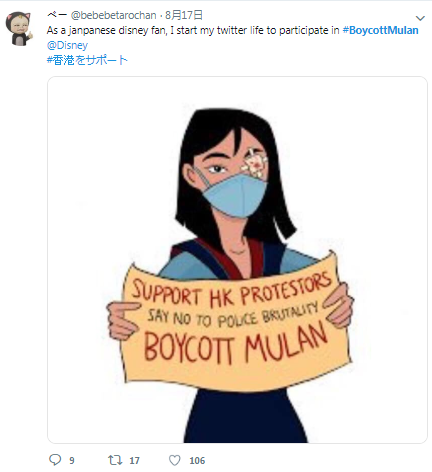 Protests have been ongoing in Hong Kong for the past 11 weeks. They began over objections to an extradition bill which would allow HK criminal suspects to be transported to China, but have since evolved to include a demand for an inquiry into alleged police brutality, as various sources, including both the UN Human Rights Commission and Amnesty International, have condemned the use of what has been described as excessive force against protesters, press media, and medics.