It's a sad week for Dark Knight fans as Warner Bros officially announced that Ben Affleck is set to take on the role as Batman in the upcoming sequel to Man of Steel.  Almost everyone is taking it badly and even car companies are getting nasty.

Upon hearing the news, mean memes and hashtags, including #BetterBatmanThanBenAffleck, were some of the ways fans shared their dissatisfaction on social media platforms.

Lexus joined in the #BetterBatmanThanBenAffleck bandwagon to get some free advertising and posted this on the companies official twitter feed: "You can question the superhero. You can't question the supercar."

Someone at the company must have thought this was a bad idea as it has since disappeared.

It was later made known that the reason for taking down the tweet might have something to do with the fact that Affleck himself drives a Lexus.

Unfortunately, marketing mistakes are harder to erase on social media and retweets can still be found. 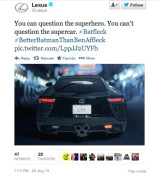