The capital of Malaysia, Kuala Lumpur (KL) is known to be an affordable and business-friendly city, according to the latest Cities of Opportunity report by Pwc. KL has moved up to the fifth place in cost (i.e. improved affordability) and has risen one spot in its ranking when it comes to "doing business" since the last Pwc study in 2014.

However, its overall performance as a city has dropped three spots to the 20th spot out of 30 leading cities globally. London claims the top position in overall rankings, with Singapore in second place — up from third in 2014. Toronto follows at third, with Paris coming in fourth.

This comes months after KL city launched a new branding initiative to position the city as a destination of choice. The new tagline reads: “Kuala Lumpur: Exciting. surprising. enticing. A city of contrasts & diversity.”

While KL has always been known for its cost and ease of doing business, a lot more can still be done to improve its status as a global business hub, said the study.

"This year’s performance is a proof that KL needs to work harder, smarter and together to improve on its standing as a city of opportunity," said Pwc's spokesman. Let's take a look at the comparison between how KL performed in key areas (left column) versus how KL can improve (right column): 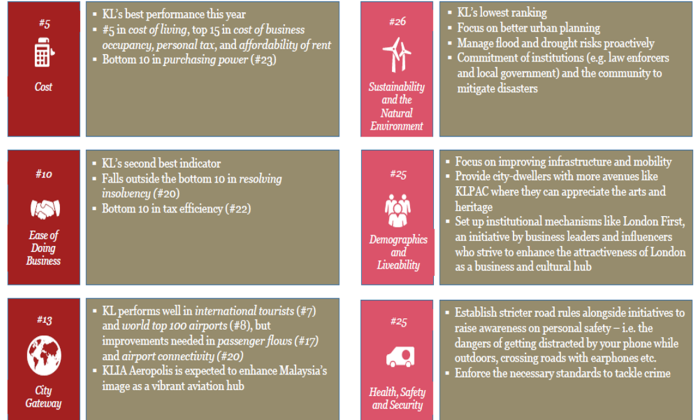 Patrick Tay, executive director of economics advisory at PwC Malaysia said, “Cities need a combination of social and economic strengths to succeed. To put us (KL) on a firm path towards inclusive growth, we should refocus our energies on creating opportunities for middle income households, addressing the increasing cost of living and promoting a dynamic and vibrant SME sector".

Tay said while KL has a robust pool of talent, moving its economy up the value chain calls for a more holistic strategy to attract and retain knowledge workers.

"Investing in initiatives to improve liveability and quality of life is one of the ways to help us achieve this. The River of Life project, MRT and world-class urban parks are needed to enhance the quality of life in KL,” he added.

Tay added that businesses depend on the city’s well-being and governments for shared success. The local authorities need to have fortitude to invest, implement and enforce the standards necessary to address the critical issues holding the city back from progress such as transportation, safety, affordable housing and education.

“Quality of living is not a luxury. It’s a basic requirement for cities and businesses to keep and cultivate talent. To move out of our average spot in competitiveness rankings, what’s needed is a concerted strategy by the public and private sectors to capitalise on KL’s strength as a city gateway into the regional and global economy,” Tay said.

The latest Pwc study measures 30 cities across 10 indicators including transportation and infrastructure, ease of doing business, demographics and liveability, technology readiness and cost.

It also takes a look at urban risk and resilience, recognising the rising stakes of disaster with cities facing increasing exposure to extreme weather, man-made threats like cyber attacks and terrorism, as well as disease.