They say life is unpredictable - it is. Sometimes one stolen Kit Kat bar might actually bring you thousands in return.

This was the case for 19-year-old college student Hunter Jobbins in Kansas last week, and it all started when he tweeted about how someone stole a Kit Kat bar from the cup holder in his car last Sunday.

Left my car for maybe 15 minutes in front of the dorms and I come back to this. College man pic.twitter.com/KlDx5BtXLX

Jobbins told reporters that he left his car unlocked for a few moments while he carried his laundry to his dorm room, only to find a handwritten note on a napkin where the candy bar had been when he returned to his car.

"Saw Kit Kat in your cup holder. I love Kit Kats so I checked your door and it was unlocked. Did not take anything other than the Kit Kat. I am sorry and hungry," it read.

The ridiculously sincere note touched so many that it instantly went viral on the web, and caught the eyes of the Hershey Company, the parent company of Kit Kat, as an excellent free publicity opportunity arising from Jobbins' misfortune.

Five days later, Hershey sent 6,500 bars of Kit Kat to Jobbins, and this tweet took the internet instead. 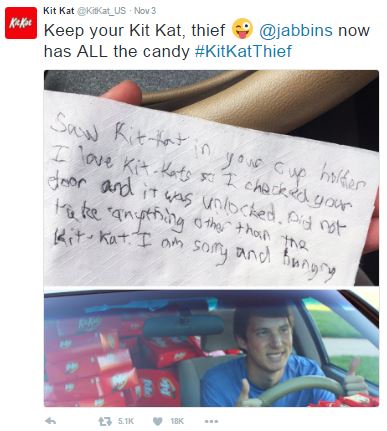