E-commerce giant JD.com has teamed up with the Shaanxi provincial government to build the world's first drone delivery network on a large scale and the two signed a strategic cooperation agreement.

The cooperation agreement, signed Tuesday in the provincial capital Xi’an, seeks to build an air base that will be built for large and medium-sized drones that can deliver cargoes across a range of more than 300 km.

JD.com has already been using a drone distribution system in part since June last year in Jiangsu province, Beijing and in Xi’an. 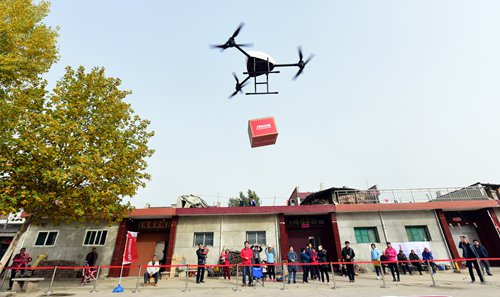 According to the company’s estimates, the new distribution system will generate more than 10,000 jobs and a combined turnover of 100 billion yuan by 2020.

Shaanxi, part of the ancient 'silk road', is in the process of reinventing itself as one of northwestern China's key logistics centers.