At a time when the purchase journey for airline tickets has progressively been brought online, offline strategies remain very relevant as travellers exhibit strong omni-channel behaviours on both online and offline platforms during the purchase journey, a GfK study has found.

Meanwhile, 65% of travellers in Hong Kong utilised PCs, tablets and smartphones throughout the purchase process to gain access to information.

Though 96% of respondents utilise a combination of the internet and traditional brick and mortar channels, traditional mass media remains the most dominant offline touch-point that triggers the gathering of travel information.

About 74% of respondents were prompted to action after they saw an advertisement in a newspaper or magazine, while 70% said they had read an article in this medium. 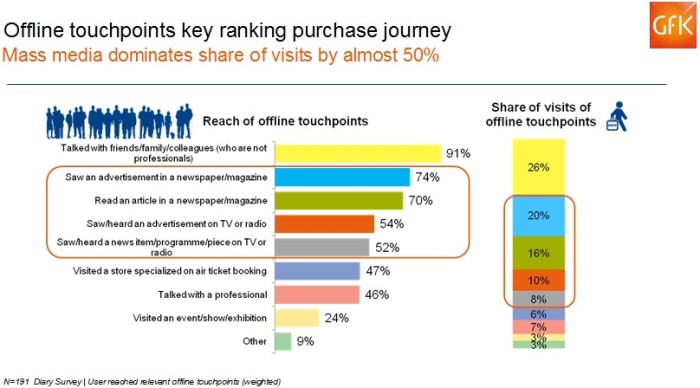 More than half said their travel plans were sparked by TV or radio ads.

“Advertising in the mass media is an effective platform to garner the interest of intended travellers and a good complementary channel that helps them shift from offline to online,” said Laurens van den Oever, global travel director at GfK.

“Over 98% of respondents said they took their research online and 54% eventually completed their purchase during this process.”

The purchase decision is also demonstrated to be long. A typical consumer spends almost five hours researching online for their trip on average.

During this period, they make an average of 92 visits to 22 travel-related websites and apps before actually purchasing their bookings via the internet. 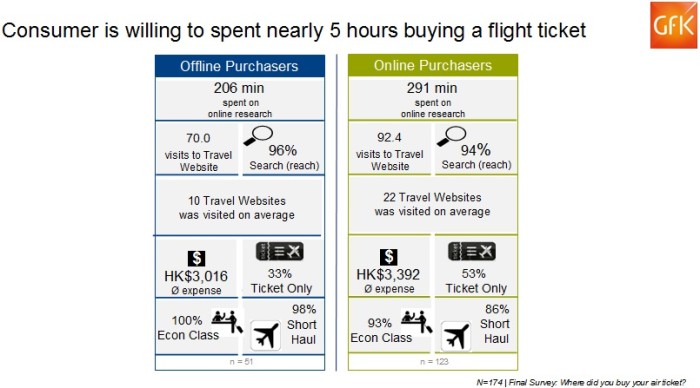 “It is especially important for industry players to understand the consumer purchase journey as they plan their trips so that travel service providers can more thoroughly understand the complexity of the process,” said Van den Oever.

“This will ensure that they are effective in their offerings and present in the relevant phase of the journey, both online and offline, and from the planning stage right to the very end when the purchase is eventually made.”

The findings revealed search engines were used intensively at the very beginning of the process for both online and offline purchasers, he added.

“With the widening coverage and global reach of online service providers, consumers are increasingly focusing on specific established brands popular in their local market, reinforcing the fact that having a strong presence and top-of-mind awareness provides these companies with a head start.”

The nine-week survey from March to May 2014 polled more than 700 Hong Kong travel decision-makers who intended to purchase an air ticket in the next three months, and who agreed to instal GfK Nurago’s online tracking software on their digital and mobile devices.