The Philippines is turning out to be a booming tablet market in Southeast Asia, after recording the highest year-on-year growth in tablet shipments in the region for the first quarter of the year.

A total of 598,375 tablets were shipped to the Philippines in the first three months of 2014, translating to a year-on-year growth of 110%, according to the International Data Corporation (IDC).

Samsung and Apple continue to lead the tablet race in the Philippines, garnering the first and second place, respectively. But the IDC noted that homegrown vendors are steadily gaining ground in the Philippines, with Cherry Mobile and Starmobile being two of the strongest.

“Backed by cash-rich marketing and A-list celebrity endorsements, Cherry Mobile and Starmobile continue to feed the appetite of Filipino consumers for budget-friendly tablets. The rising demand for tablets from these homegrown players will keep the Philippines tablet market on a growth trajectory in 2014,” said Jerome Dominguez, associate market analyst at IDC Philippines.

Price remains as a primary consideration among consumers in the Philippines, but after-sales support is also becoming a priority. IDC owed the trend to defect issues that have been plaguing the Philippines tablet market since 2013.

“The Philippines remains a predominantly budget-conscious market for devices, which explains the high demand for budget tablets among its consumers. The growing competition between international and local tablet brands is good in that it will encourage the players to continue to innovate and improve product quality to stay ahead of the competition,” said Daniel Pang, senior research manager for client devices at IDC Asia/Pacific. 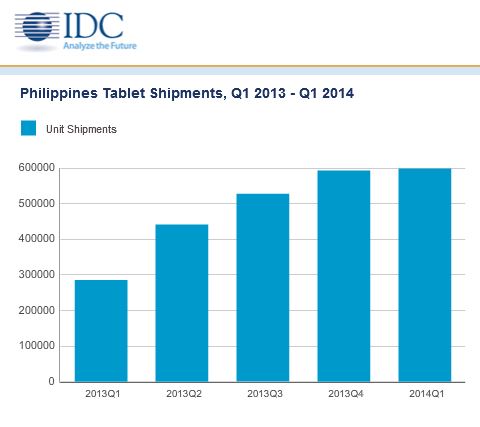