Asian countries including Malaysia, Indonesia, and Thailand have the highest day one app retention rates globally with an average of 25.2%, according to Liftoff’s latest Mobile App Trends Report which covered 30 countries in four regions, including 11 countries in Asia Pacific. Retention rates refer to the percentage of users who continue to use the app over a given period.

Taiwan outperformed the region’s average retention rate at 29.5%, followed by Malaysia (29.1%), Japan (28.4%), and Thailand (27.0%). Indonesia had a day one app retention rate of 25.5%. Despite this, day three retention rate was only 12.6% in Asia, the lowest across all regions, while day seven retention rates dropped further to 8.1%. While this number was lower than the 8.9% and 8.5% in North America and EMEA respectively, it was still higher than the 7.9% in Latin America.

More specifically, Malaysia saw a dip in day seven retention rates to 9.4% while Indonesia and Thailand saw a drop to 6.7% and 7.6% respectively. According to the report, the dramatic decline in retention rate underlines the merit of getting a much earlier start on re-engagement efforts to extend the app user lifecycle. As such, 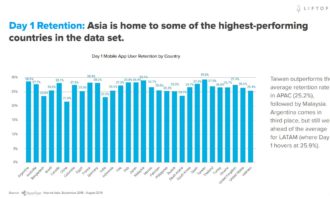 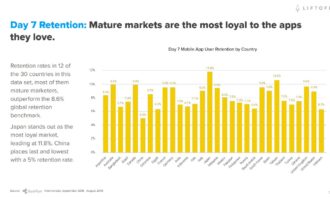 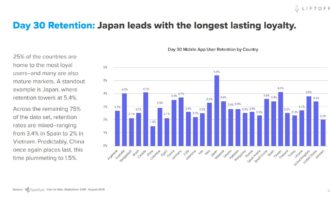 The report attributed the high early retention rates in Asia due to the relatively low cost to engagement ratio for users to install an app, which at US$1.11 cost for 100% engagement, signifies one of the lowest ratios amongst all the regions.

The drop off by day 30 could then be explained by the low conversion of cost to engagement for in-app purchases (US$85.95 cost for 1.3% engagement) and purchases (US$67.68 cost for 1.6% engagement). Despite this, there seems to be more value derived from app subscriptions in Asia. For instance, the cost to acquire users in Asia was US$28.95 whereas the engagement rate was 3.8%.

While the engagement rate was only the third highest amongst all the other regions, the cost was the lowest.

Subscription rates have increased by more than 1.5 times year-on-year, according to Liftoff’s report, signifying the trend that consumers are moving increasingly away from ownership.

Mobile users are far more willing to subscribe to a service than make a one-time purchase.

The report noted purchase as the most expensive engagement activity across all app categories, including gaming, dating, finance, and utility. While in-app purchase is marginally more expensive, Liftoff’s report said it is not the only way gaming apps can make money. Currently, the cost of in-app purchase for gaming is US$86.61.  The report said:

The advance of ad-supported models and rewarded video provide marketers lucrative alternatives too. 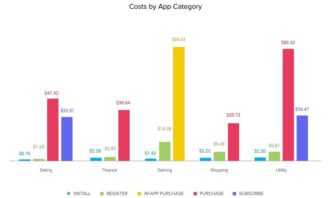 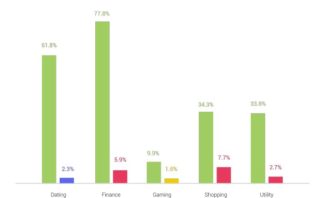 Even though marketers have mastered the art of driving middle-funnel activity, they are failing to trigger purchases.

For example, nearly 27% of users register for shopping apps but they do not purchase. While the cost for a first purchase may be pricey, the engagement rates for shopping (7.7%) and finance (5.9%) are the highest, the report said.

Additionally, there is also a strong correlation between need and speed. Finance is an app category that users generally download with a strong sense of purpose, such as paying bills or making investments, and is the fast-mover in the group. According to Liftoff, it takes only 1 hour 10 minutes for users to make a purchase. Dating apps come in second, with an install-to-purchase time of 14 hours and 28 minutes. This is followed by shopping (1 day 8 hours and 55 minutes) and gaming (1 day 22 hours and 35 minutes).

CEO and co-founder of Liftoff, Mark Ellis, said the subscription model, particularly in eCommerce, offers consumers a convenient, personalised, and often lower-cost way to buy what they want and need.

“In Asia, we are now seeing more regional companies attempting to emulate the subscription-based models seen in the West and try to replicate it in the region. With, internet and mobile penetration set to grow even further, we only see such services not only becoming more popular in the region, but even going as far as to say that they could be the norm,” Ellis said. He added that marketers looking to capitalise on this cultural shift should explore subscription-based models or tiers, or take note of key points in the year when purchase behavior is up to get the most bang for their buck.

R3 builds US presence with slew of new hires

"From a commercial context, this is just a way for businesses to generate revenues during a time when more resources are required ..

Now in its third year Sky Post (晴報) releases series of ads to reinforce its position as a rational voice in Hong Kong's cut throat..

The news feed will feature news, reviews and entertainment content. ..