This week marked the opening of the Hong Kong Ocean Park Marriott Hotel. The official opening of the three-winged 471-room property took place on Tuesday 19 February with several business representatives and dignitaries of Hong Kong and mainland China’s government in attendance.

The theme park-adjacent hotel was a joint development between Lai Sun Group, Ocean Park Hong Kong and Marriott International. Due to this relationship and its close physical proximity to Ocean Park, the hotel has had many ecological elements put into its design, both aesthetically and in its functionality.

In addition to the lobby’s three-floor-spanning, 16-metre tall circular aquarium and the heavy use of nature-based decoration, elements like the hotel façade’s energy-saving design mean the building meets the standards for an environmental-friendly gold-rating for BEAM (Building Environmental Assessment Method) Plus New Buildings.

Officiating at the ceremony, Craig Smith, President and Managing Director of Asia Pacific for Marriott International said, “This collaboration is a meeting of like-minded partners and brings together what the Marriott Hotels brand means by inspiring brilliance. Creating a green urban oasis that’s just moments from the heart of the city is a stroke of genius that reflects a side of the city that is remarkably green and not just the towering skyscrapers Hong Kong is renowned for.” 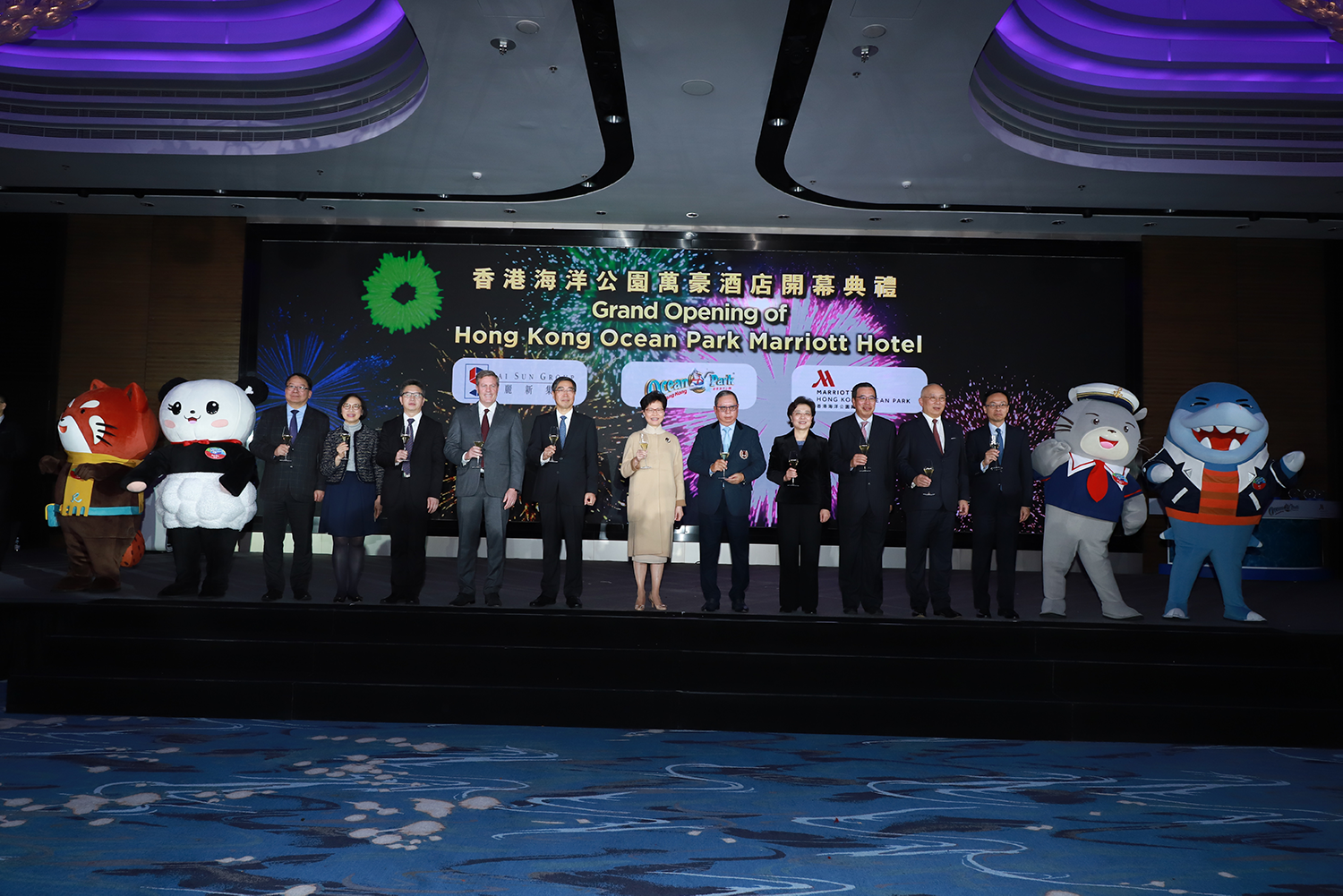 As well as representatives from the hotel’s development partners – Chairman of Lai Sun Group, Peter Lam and Chairman of Ocean Park Hong Kong, Leo Kung – among the event’s 1,000 guests were several governmental figures. Making a notable appearance were Chief Executive of HKSAR Carrie Lam, Deputy Director of the Liaison Office of the Central People’s Government in the HKSAR, Qiu Hong,  Deputy Commissioner of the Office of the Commissioner of the Ministry of Foreign Affairs of the People’s Republic Of China in the HKSAR, Zhao Jiankai.

Carrie Lam commented on the potential for the hotel, including the use of it for various conferences and events, saying, “The opening of Hong Kong Ocean Park Marriott Hotel is one of the important milestones to transform Ocean Park into a world-class resort destination. It enriches the offerings of the Park, making it more attractive for visitors to stay in Southern District, as well as for family tourists, MICE events and overseas school excursion programmes. I am confident that the opening of this new Marriott Hotel will help propel the development of Ocean Park further.”

Singapore’s most watched ads and videos

It's all about content this year, and here are the videos and ads that got consumers absolutely hooked...

She first helmed the role as GM of TSLA's Singapore office in 2015...

UNICEF reveals its first re-brand in over a decade

Replacing the old tagline "unite for children, the new tagline aims to address its services in support of millions of children aro..

Besides branding, he will focus particularly on designing innovative customer and product propositions, as well as building up eff..