Following the recent launch of Appleâ€™s new iPhone 8 and X, a study by iPrice found the new smartphones garnering traction in Malaysia.Â However, the same could not be said for Indonesia, where a higher interest in older iPhone models such as iPhone 6 has been found.

According to research and data gathered by iPrice, a majority of Indonesians across different provinces were found to be searching for terms such as â€śiPhone 6 priceâ€ť instead of â€śiPhone 8 priceâ€ť or â€śiPhone X price. This was one week after the launch of iPhone 8 and X.

Out of 10 provinces studied, six provinces saw those with high minimum regional income in 2017 more interested in the price of the iPhone 6. This included regions such as DKI Jakarta, North Sulawesi, Aceh, South Sulawesi, South Sumatera and dan Riau Island.

According to the study, this could be due to the higher price point of the iPhone X this year as compared to previous iPhone models. This could also translate to even heavier price points due to currency exchanges when the new iPhone models are sold outside the United States.

Other surprising findings observed by iPrice include higher interest in the iPhone X in provinces found to have lower minimum regional income. These provinces are Gorontalo and East Kalimantan.

In terms of Google trends, iPhone 8 and X garnered the most interest during its launch period, which was around 13 to 14 September 2017. According to iPrice, five days before the launch of the new iPhones, consumers in Indonesia were still more interested in the prices of iPhone 6 and 7 compared to 8 and X. This was based on insight gathered one week before and during the iPhone launches.

According to the study, this may have occurred because Indonesians looking to buy a new phone were expecting the price of older iPhone 6 and 7 to drop following the new product launch. This is because the value and prices of older iPhone models were perceived to drop. 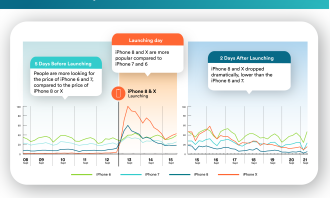 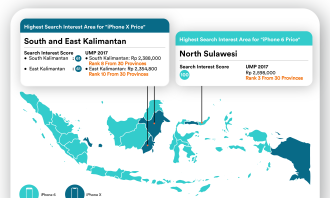 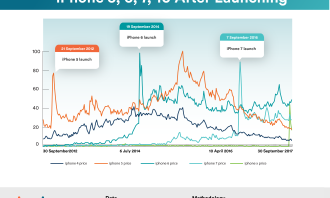 When compared to the popularity of iPhone 5, 6 and 7 post-launch, iPrice found the interest of Indonesian consumers to newer models such as iPhone 8 and X dropping several weeks or even days after the launch days.

However for the case of older iPhone models, iPrice observed that after its launch, the iPhone 5 was able to maintain the popularity, higher than their previous model, iPhone 4. The interest was still observed to be high even until the launch of iPhone 6 model. Moreover, iPhone 6 managed to maintain its popularity several months after the launching, from September 2014 until February 2015. According to iPrice, there are several factors that could support this situation, from Appleâ€™s lack of â€śinnovationsâ€ť, to expensive prices.

To measure the popularity of the recent iPhone models, iPrice uses the data that is available in Google Trends.

Read also:Â iPhone 8 outshines Galaxy Note 8 online, and it hasnâ€™t even been shown yet

The top Malaysian broadcaster has presented its 2014 innovative programming line-ups and cross-platform at the Media Prima Televis..

Cognitive represents a new model of computing that includes a range of technology innovations in analytics, natural language proce..

This comes as e-sports is included as a medal event in next year's SEA Games...

The collaboration will see the entertainment company commissioning various projects such as mini-movies and web series. ..

In his new role, Lee has been tasked with overall creative leadership of Publicis Malaysia as well as responsibilities to selected..