Heineken has launched its latest campaign  ‘The Adventure’ and the Heineken Cities Festival in Singapore.

The Heineken ‘Cities of the World’ is a global campaign aimed at inspiring one to "open your city and perspectives, and live worldly adventures by unlocking the secrets of your city."

The local activation celebrates the launch of the Limited City Edition Heineken Bottles with a social video titled ‘The Adventure’ and the Heineken Cities Festival, a street party at Ann Siang Hill and Club Street, coming up on 30 August 2014.

‘The Adventure’ features a journey brought to life by an interactive billboard that spurs one to embark on a series of adventures from London, New York, Rio de Janeiro to Shanghai, but experienced here in Singapore.

The video embodies the spirit of adventure in making the most of one’s metropolis and uncovering new experiences in your city, which often go unexplored.

Calling on city urbanites keen to open up their world with new perspectives – on 30 August 2014, the Heineken Cities Festival brings together some of the world’s top city experiences in this unique urban street festival at Ann Siang Hill and Club Street, which exemplifies the cosmopolitan nature of Singapore as a melting pot of cultures.

The line-up includes roving performances from Brazilian samba dancers, drummers and break-dancers who will bring the vibrant spirit and flavours of New York, London, Amsterdam, Rio de Janeiro and Shanghai.

Highlights of the evening include live music spun by internationally renowned female singer-songwriter-producer-DJ Rae, as well as a live mural painting by local visual artist, illustrator and founder of OIC (Organisation of Illustrators Council), Mindflyer with his colourful flight and escapism-themed artwork. 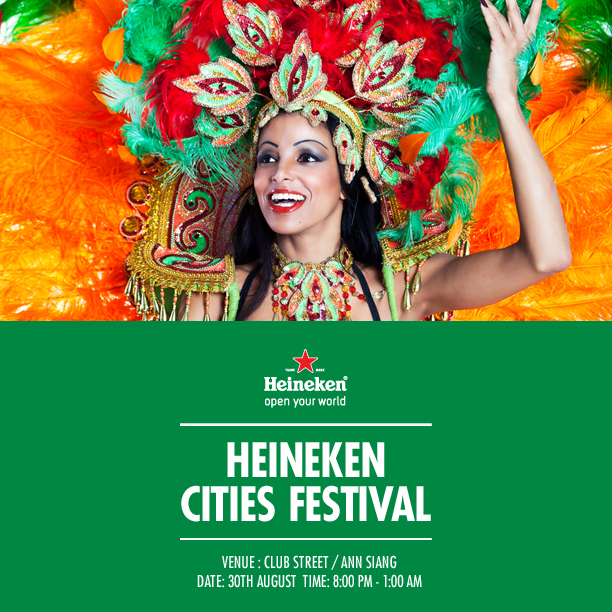 At the festival, consumers will be able to enjoy the Limited City Edition Heineken bottles while soaking in the vibrant atmosphere and lively entertainment all evening.

The bottles are named after six great metropolises of the world – New York, London, Amsterdam, Rio de Janeiro, Shanghai and Singapore, which is a special commemorative edition exclusively available here.

“The Heineken Cities Festival celebrates the various worldly experiences in Singapore by bringing to life the different sights and sounds from various top cities across the globe. We hope that it will inspire all to explore their city and venture out of their usual routine to embark on their own legendary adventures,” Rene de Monchy, head of marketing, Asia Pacific Breweries Singapore, said.