Only two in every 10 senior executives outside the communications function know what PR stands for. Meanwhile, 40% of executives do not think PR delivers good value to the business.

These were the findings by Releasd that were discussed during a fireside chat at A+M’s inaugural PR Asia conference, with Star Media Group’s CEO Andreas Vogiatzakis (pictured left) and LOOB Holding’s CEO Bryan Loo (pictured right).

According to Vogiatzakis, who has spent the bulk of his years heading up numerous global ad agencies across the world, despite what the statistics may say, he believes PR is absolutely critical to any organisation and he communicates with his corporate communications team on a daily basis.

He added that what matters at the end of the day is to remain in sync about the messages the company wishes to convey to audiences.

While more CEOs are fast becoming the face of brands, he believes the corporate communications team still forms part of the core of any organisation.

“CEOs might have become the storytellers or spokespersons, but the corporate communications team is a big part of it. It’s not about who’s doing it better or who does what; we work as a team. You are going to be in many [crisis] occasions and you need to tag team with your spokesperson,” he explained.

He added that in a crisis especially, depending on the situation, the CEO and the PR teams need to decide together how much involvement the CEO should have.

“I think when the CEO gets involved in such moments of crisis, it can get a little bit more personal and real rather than having a corporate communications individual address it,” he said.

Of course, he explained there will also be situations “where the CEO needs to be protected meaning because the CEO represents the company, therefore it would be more accepting for the corporate communications department to stick to the script in tough situations”.

Moreover, when the CEO gets involved in a crisis there is almost always an impact on the share price.

Nonetheless, in all his roles, Vogiatzakis believes it is vital for the CEO to always run through every material or speech that goes out to the public.

“It’s not that you become the spokesperson of the company unconditionally. It becomes a collaborative work,” he added.

Adding to the conversation, LOOB’s Loo said he engages with his PR team on a regular basis as PR is a big part of its business model.

Internal communications is also big on the company’s agenda and the team holds 15-minute chats every day to discuss the type of content it wants to communicate to its 30,500 employees at LOOB through an interactive app.

Sharing his story of when Tealive was birthed from its dispute with franchisor La Kaffa International in 2017, which eventually saw LOOB giving up hold over the Chatime franchise, Loo said at that point, what he realised was the importance of legal and PR also working in tandem.

“One thing that I always had to remember was that our PR messaging could not go beyond the perimeters of legal because we were out there to win the war, and not the battle. In that crisis, given that we wanted to win the war, we had to keep in check what we were saying,” he said.

He added that plenty of times, people tend to over speak during a crisis because they feel the reports circulating will represent them unfairly.

“They have so much in their hearts they want to explain, but in the long run, that causes more issues. Sometimes in a crisis, you just have to bite your tongue and accept that what is going on out there might not be in tune with the actual facts of the matter,” he added.

Loo calls that period of the legal battle a time for maturity for both himself and his team where he learnt to no longer be driven by emotions during a crisis.

“Your emotions as a CEO shouldn’t be the way of how you get through issues. I give credit to my communications team for giving us good advice and putting us in a good position,” he said.

Loo added the team also hired an external agency at that point to ensure a neutral, third party point of view of the company. The relationship since then with his external PR agency has developed so much, the team now works with LOOB on a long-term basis. 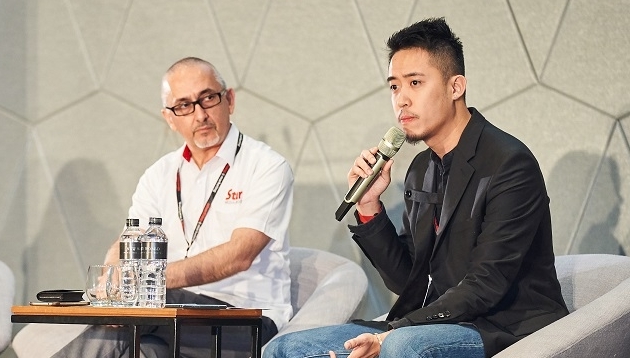 An active and social CEO

Loo, who actively posts on his social media almost ever single day, currently boasts over 76.7k followers on his Instagram. When asked how his content stands out in today’s sea of conversations, he says that CEOs need to work with corporate communications teams to stand out.

“[CEOs] are good storytellers, but [the PR teams] are the ones who have to put the story out to the general public. There are no overlaps in roles,” he said.

“[As CEOs], we love the brand and we tell our side of the story, while the corporate communications teams are the ones that decide which are the effective channels to address issues and ensure the messages reach the right audience.”

He explained he likes to share personal issues such as his passion, while his corporate communications team will touch on being a value-driven organisation and brand.

“The good thing about this is when we combine both aspects together, it becomes very powerful. Over the years, we learnt that we don’t just build the brand, but its soul too. When it comes to showing the ‘soft’ and ‘hard’ side of the brand, we believe it is something we have done correctly,” he explained.

Adding to the conversation, Vogiatzakis explained that having a more social CEO also adds value, humanity and personality to the brand. This then allows the brand to not come across as too corporate and will, in fact, add value as long as it is done in good taste.

Making it to the boardroom and finding PR’s value

According to Vogiatzakis, in the case of Star Media Group, the current head of corporate communications sits on the committee, is aware of what’s happening in the company and has a voice in the boardroom.

“I fundamentally believe that this is vital. In our case, they are in every interaction we have internally or externally, and every function we do,” he said.

“If they aren’t, how would I expect the team to really manage our DNA and build our equity internally and externally with all the shareholders? How would I expect my corporate communications to prepare my speech if they don’t know my personality?”

He added that PR professionals need to make a case and tell their CEOs why it is so important for them to make it into the boardroom. But the reality remains, that unlike sales and finance-related goals, putting the dollar and cents worth into PR is not as easy.

For Loo, he believes that CEOs need to also see the value of PR for what it is – to build a relationship and image with the consumers in mind. As such, he has never actually put a dollar and cents value on his PR team, but rather has consistently measured the positive associations the public makes to the brand.

This move is set to further drive investment in mobile advertising in the region...

Y&R Philippines’ Water Lamp for North Face was awarded a number of top honours including ‘Print Innovation of the Year’ and Gr..

Newgate Communications announced the expansion of its Asia operations with the launch of an office in Shanghai...