Gap earns some serious points for its quick, classy response after Arsalan Iftikhar, senior editor at The Islamic Monthly and founder of TheMuslimGuy.com, alerted the retailer that vandals had defaced one of its NYC subway posters featuring Indian Sikh-American actor and fashion designer Waris Ahluwahlia. Hooligans changed the campaign's "Make love" tagline to "Make bombs," and added the slogan, "Please stop driving taxis."

"I wanted the world to see how millions of brown people are viewed in American today," Iftikhar writes in the Daily Beast. "So I proceeded to post this photograph to my 40,000+ Twitter and Facebook followers and asked them to share this photograph with their friends to try and create some social media buzz and overall awareness. After hundreds of re-tweets and Facebook shares by people of all colors and backgrounds around the country, there was so much social media buzz in less than one day that Gap contacted me directly after hearing about its vandalized advertisement and wanted to know the exact location." 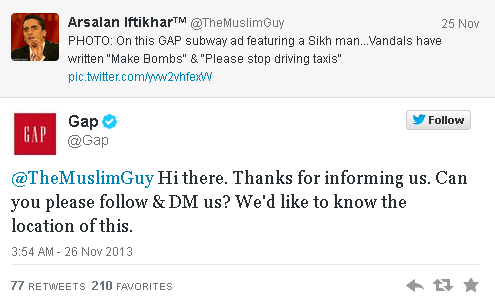 Then the company took its response a step further. "In addition to Gap’s rocket-fast attempt to find out more details about the situation," writes Iftikhar, "I have to say that the best part about the company’s response to this social media campaign is that it currently has the Sikh model as their current Twitter background photo."

That show of solidarity and understanding is generating gobs of positive press and good vibes. In a world so often divided, it's a great way to bridge the gap.