Global data and measurement-driven agency Essence’s Jakarta office opened doors last February in 2018, along with Mumbai, Bengaluru and Melbourne. This brings total count of offices in APAC to nine.

In a conversation with Marketing Interactive, Essence APAC CEO Kyoko Matsushita said the focus for Indonesia in 2019 is to build what she called the “mother ship” of its capabilities to enable the agency to scale at a fast pace next year. This includes finding the right talent and leadership, and identifying which parts of the business is going to be centralised.

“We grew this region almost every year over 100% and everybody said it’s not sustainable and it’s going to slow down. But, Indonesia has been on our radar to really grow,” said Matsushita. She added:

I’m pretty bullish and ambitious that next year we can double the revenue given the market opportunities.

The agency, which was acquired by WPP’s media investment arm GroupM, currently has a team of 10 in its Jakarta office. Indonesia’s appetite to do something new is one of the key reasons that drove its expansion into the market, according to Matsushita.

The work done in Indonesia

One memorable work the agency did last year was the “Football Answers Made Easy” campaign in Indonesia to encourage use of the Google Search app for sports queries. The campaign pulled real-time data from the app to send football fans updated schedules, scores and highlights throughout the day, while mimicking how football fans thought, felt and did.

To further tailor messaging and increase relevancy, the campaign’s target audience was segmented to light, medium and heavy soccer fans. 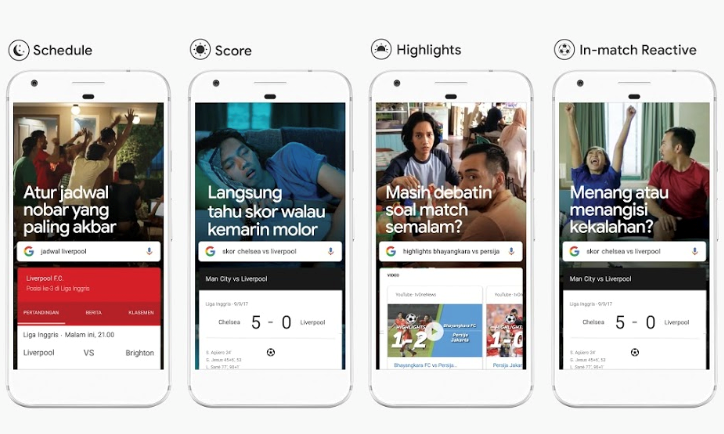 As a result, the campaign successfully reached out to more than 90 million Indonesians through over 4000 iterations of the advertisements. According to Essence, the app received over 600,000 new daily active users and 113% increase in football search queries.

The CEO of APAC said that such a campaign that brought creative, technology and data together was a first for Essence in Indonesia and a breakthrough, given that the market is still in a “nascent” stage. The real-time data, said Matsushita, is what captured users’ attention and triggered them to take action.

I think 80% of the success of a campaign is very much dependent on the content and the messaging.

She added, “Media is extremely important but if creative is not relevant, it doesn’t matter what channel you use. It won’t resonate.”

With that in mind, the agency hired talents with creative background and started a new practice called experience. Evolving from a digital agency into an integrated full-service offering in India and Korea at the start of 2018, Essence had also started other practices such as business/communication strategy, data strategy and client analytics across APAC.

She added that today, most clients are looking to “lower funnel data” to understand what is the final push that drives consumer purchasing decisions. That data will help them to improve their marketing efforts and even products. For example, if consumers like the product appeal but are put off by the price, pricing is the “fall-off point” that businesses should look to resolve.

However, Matsushita said doing so is more challenging in industries such as consumer products such as shampoo or diapers. While more are moving online and gathering data, majority of the sales in markets like Indonesia still come from physical stores. Unlike mobile games that are monetised, for instance, those industries are unable to collect real-time data on what triggers people to buy the product.

“Just because of the nature of the industry or the product, they rely more on available data, such as third-party data from research agencies. You can use that data and still get insights, but there’s latency at times in terms of the relevance of the data, because consumer behaviour and purchase patterns are changing very fast,” explained Matsushita.

Reporting to Matsushita is SVP and managing director Kunal Guha, who is responsible for the Central Asia region and Essence’s APAC hub operations. This includes leading the agency’s Jakarta office. Prior, he was the strategy director for APAC when he joined in October 2014.

How consumers will take to the service is yet to be seen, but the marketing industry remains divided about its value for brands...

Marriott enables Alipay to hotels and resorts under its brands...

The appointment comes amidst news surfacing on Bloomberg that the bank is considering cutting as many as 250 of about 1000 managin..