E-cigarette brand JUUL Labs is being sued for intentionally marketing and selling its e-cigarettes to young people on platforms such as Cartoon Network and Nickelodeon, following its product's launch in 2015. According to a lawsuit filed in Massachusetts court seen by Marketing, JUUL intentionally chose models and images that appealed to young people.

It also allegedly recruited celebrities and social media influencers with large numbers of underage followers, such as Miley Cyrus, Cara Delevigne, and Luka Sabbat who is an 18-year-old considered to be "the internet's coolest teenager", said the lawsuit. Additionally, the lawsuit said JUUL paid online publishers such as UrbanDaddy and Gawker to promote youth-oriented advertising content for JUUL through their social media accounts on Instagram, Facebook, and YouTube. For example, in 2015, JUUL paid a website known as Hypebeast for custom youth-oriented Instagram content that associated the JUUL device with the fashion designer Akomplice.

"JUUL used these programmatic media buyers to purchase space for JUUL advertisements on websites that were highly attractive to children, adolescents in middle school and high school, and underage college students. These advertisements included the images of models from the Vaporized Campaign," attorney general Maura Healey said in the lawsuit.

From the outset of the "Vaporized Campaign", JUUL allegedly collected the email addresses of visitors to its website for its email marketing list, and regularly sent emails to its marketing list that promoted JUUL products and offered specials and discounts. However, it was said that JUUL sent these marketing emails to email addresses associated with consumers who had failed JUUL’s age verification process or did not complete JUUL’s age verification process after putting JUUL ecigarettes in their online cart for purchase.

In 2017, JUUL engaged Tower Data to determine the ages of persons associated with email address on its email marketing list. Although Tower Data said that 83% of the approximately 420,000 email addresses on JUUL’s marketing list could not be matched with the record of an individual at least eighteen years of age, the company continued to send marketing emails to the list for a full year, the lawsuit said.

Positioning itself as a cutting-edge tech lifestyle product

In 2014, JUUL engaged Calgary-based advertising agency, Cult Collective, to complete a “diagnostic” evaluation of the JUUL brand and to make recommendations regarding the best advertising strategy to market the JUUL e-cigarette. Cult presented an overall “creative” concept to JUUL that included images, slogans, and scripts for a JUUL advertising campaign.

The lawsuit said Cult suggested that JUUL should present itself as “a technology company, not a tobacco company” that had achieved “proprietary technological advances in both physics and chemistry.” These technological advances enabled JUUL to offer an e-cigarette that is a “satisfying alternative” that is “better than cigarettes.”

Cult was said to have recommended that JUUL position its e-cigarette itself as the “hero” or focus of advertisements. Cult presented JUUL with advertisements that used “retro” images of a boom box, a joy stick, and a mobile phone from the 1980s juxtaposed against the JUUL e-cigarette, captioned “JUUL/The evolution of smoking/Finally, a truly satisfying alternative.” These images featured products that were readily recognisable by older consumers – products that teenagers today might only recognize from old movies. Cult presented these advertisements, including the following examples below, to JUUL in December 2014, the lawsuit said. 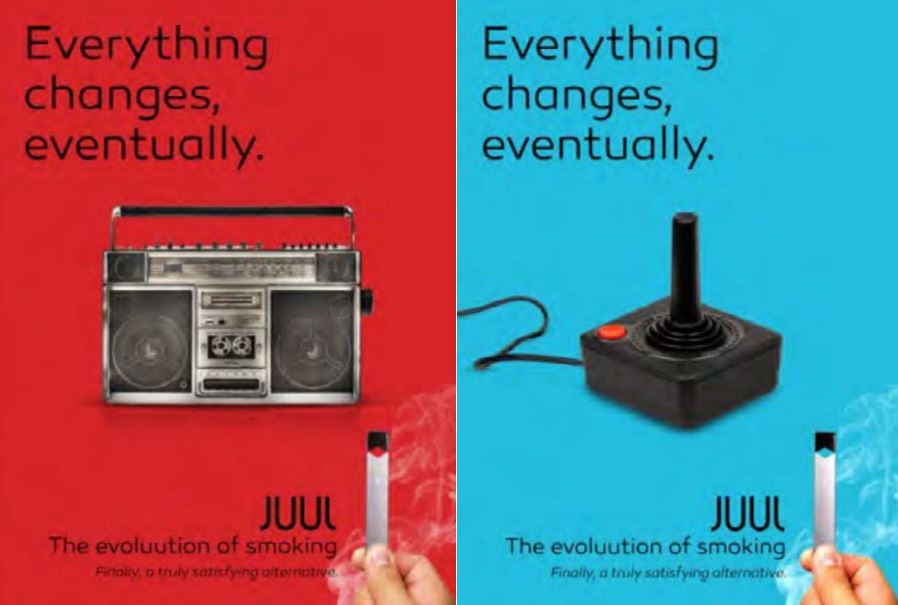 Instead, the lawsuit alleged that JUUL rejected Cult’s proposed advertising campaign in its entirety. The company decided to market its e-cigarette in an entirely different fashion. JUUL set out to claim “cool equity” that “combustible cigarettes … own", and it also sought to “win with the cool crowd in critical markets” by portraying the JUUL e-cigarette as a “cool, cutting-edge tech life style product that advances [a user’s] image.”

"JUUL explicitly sought to appeal to consumers who were 'fashionable, urban with a vibrant life', and 'enjoy[] going out to shows and events', the lawsuit said.

According to the lawsuit, JUUL made approximately US$3.3 billion in US retail sales between September 2018 and August 2019 and controls approximately three quarters of the e-cigarette market. Attorney general Healey said JUUL, "more than any other company", bears responsibility for the fact that millions of young people nationwide are now addicted to e-cigarettes, reversing decades of progress in combating underage tobacco and nicotine use and addiction.

Meanwhile last year, the company was slammed by non-profit organisation Campaign for Tobacco-Free Kids in a public statement for its CEO’s “fake” apology, following a documentary airing on CNBC. The non-profit organisation also claimed that JUUL still refuses to admit that the company’s marketing is targeted children, or has played a major role in youth use of its e-cigarettes, despite overwhelming evidence to the contrary.