Does your name have L, O or W in it? VW might just give you a nice little treat

Volkswagen Singapore has run a cheeky promotional campaign which gives mystery gifts to those with the letters “L”, “O” or “W” in their names. The move comes on the back of an eight-year low Certificate of Entitlement (COE) premium amount in Singapore.

Together with Tribal Worldwide Singapore, Volkswagen also ran print ads and a social media campaign to publicise its promo which aims to gift car buyers with more value. Customers who qualified were rewarded with mystery gifts worth more than SG$1,000 when they purchased a new car – in addition to paying less for COE premiums. View the ads here: 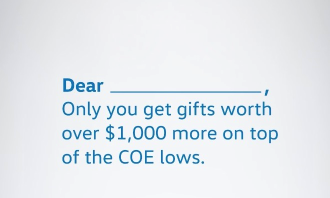 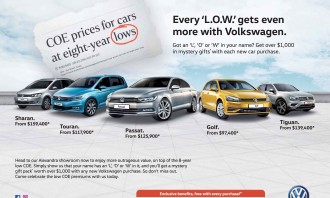 “Customers were already excited about getting a lower COE. So we decided to throw in something that would sweeten the deal. It was a novel promotional mechanic that leveraged on a trend of falling COEs,” Jamie Lee, general manager of marketing and communications at Volkswagen Group Singapore said.

In 2016, the automotive brand appointed PHD as its global media agency, effective from January 2017. The billings are estimated to be in excess of US$2.5 billion. The intensive eight-month pitch process saw PHD pitching against incumbent MediaCom and IPG Mediabrands.

The partnership sees Lion & Lion helping Unikeys in its execution, launch and media campaigns across the US, UK, Japan, France and..

Goh is tasked to drive integrated digital offerings to the agency's clients...

Evans will be responsible for leading and executing Alibaba Group’s international growth strategy to globalize the company and gro..

The appointed agency will be contracted for one year. ..