Disruptive innovation is a buzzword that many organisations strive to achieve in this day and age, but what does it actually mean and why do organisations place copious amounts of emphasis on it? The term, coined by Clayton Christensen, describes a process of developing new products or services to replace existing technologies and gain a competitive advantage in the market.

Disruptive innovations are often produced by start-ups rather than existing market-leading companies because digital innovations are oftentimes a huge risk and are mostly not profitable in the initial stages. The amount of risk involved may not sit well with these revenue-generating companies due to the organisation’s profitable nature, and as such, is not an undertaking that is common for them.

However, Media Prima realises that digital technology continues to evolve rapidly and capturing users’ attention on traditional media is not as easy as it used to be. Users are now looking for content on digital platforms, so it has to pivot from its traditional business model to one that is disruptive to continue its legacy as the market leader in the media industry in Malaysia.

This has led to the birth of Media Prima Labs, an incubator within Media Prima Digital that supports the development of content in the digital sphere. With the abundance of intellectual properties (IPs) owned by Media Prima, it only made sense for it to look into other avenues to reach out to its users, who are now more digitally savvy.

Making hay while the sun shines

With the introduction of cheaper mobile devices in the market and a reduction in mobile internet prices in Malaysia, mobile penetration is growing promptly and users are relying mostly on their smartphones these days. According to the Malaysian Communications and Multimedia Commission, mobile cellular penetration in Malaysia has reached an astounding 131.8% while smartphone penetration was at 70% in 2017.

These impressive statistics made it even more confident to invest significantly in the mobile sphere, and Media Prima Labs was tasked to further extend the group’s unique intellectual properties into the expanse of technology innovation and gaming, an area that other media companies had not ventured into at that point of time.

Media Prima Labs started by experimenting with one of the group’s oldest running IPs – Jalan-Jalan Cari Makan (JJCM). Malaysians are generally motivated by food and the question of where to eat, hence, converting the content of JJCM into a walking food directory where users could look for halal mouth-watering food nearby made a lot of sense. There were other food directory apps in the market; however, Media Prima Labs was looking to fill the gap for individuals looking for halal cuisine.

JJCM has established a strong brand name in Malaysian households and has become an integral reference point for foodies. Not surprisingly, the Jalan-Jalan Cari Makan mobile app was a hit with its viewers and recorded 65,000 downloads in merely three months and also ranked first under the “food and drink” category in the Apple app store. 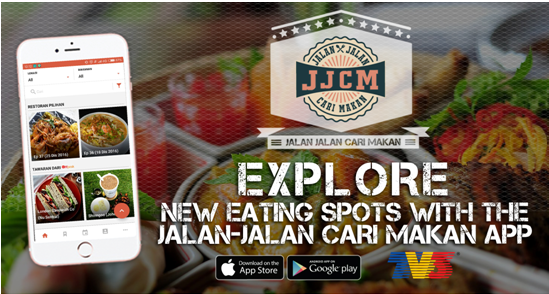 Innovating the oldest TV3 IP (JJCM) into a mobile app.

Since there is a large population of Muslims in Malaysia, Media Prima Labs wanted to continue to tap into this market, and as such, incubated two religious apps – Waktu Solat and Raudhah.  The high engagement rate on both these apps was proof of success. Waktu Solat recorded average monthly active users (MAUs) of 1.5 million and Raudhah achieved an average MAUs of 62,000. The monthly average time spent for Waktu Solat and Raudhah was 165s and 371s respectively.

To further benefit users, it also partnered with Tripfez, a Muslim-friendly travel company to offer special Umrah packages in the Raudhah app.

With the success of these lifestyle mobile apps, Media Prima Labs hoped this would have a snowball effect on mobile games as well, and as such, partnered with the Malaysian Digital Economy Corporation (MDEC) to kick-start this vertical by organising its very first hackathon.

MDEC’s expertise in this area allowed Media Prima Labs to reach out to the best talent in the mobile game development industry and these developers were put together for 36 hours to conceptualise a mobile game for a new animation IP from TV3 – Ejen Ali. On top of the prize money, winners of the hackathon were given an additional sum of investment to further develop the game within a given time frame. 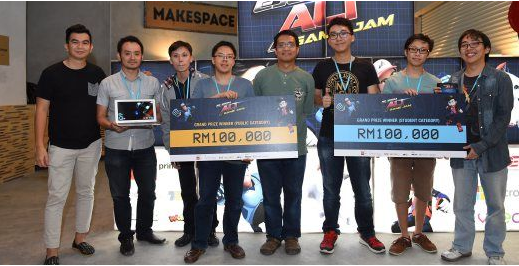 This hackathon marked the start of Media Prima Labs’ involvement in the mobile game industry, especially with the introduction of the two Ejen Ali mobile games. The Ejen Ali M.A.T.A. Training Academy targeted kids between the ages of five and 12 and is a simple tap game, whereas Ejen Ali Emergency targeted younger adults with its multi-level action and puzzle-based genre.

The overwhelming number of downloads from when the games were first launched in 2016 were encouraging, but the icing of the cake was winning a total of 12 awards for both apps, including being voted as the winner for the Audience Choice Award. To date, both games have garnered more than 3.5 million downloads.

Media Prima Labs’ recent success was another game title named Mak Cun’s Adventure – a time management game featuring local cuisine and a character that is well known for her entrepreneurial spirit. This mobile game garnered 100,000 downloads organically in the first seven days of its launch and was recently featured on the Apple App Store as the “Game of the Day”. 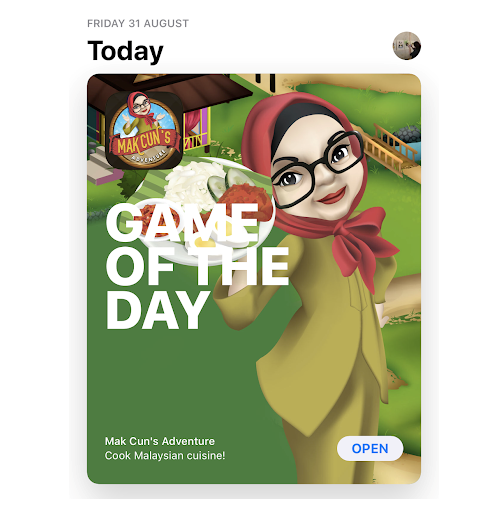 Mak Cun’s Adventure featured as Game of the Day on the App Store.

Over the past two years, Media Prima Labs has incubated more than 18 apps for the group in various categories – games, lifestyle, religion, food and sports. In essence, it has successfully disrupted the way 7.2 million users consume content, and shifted the paradigm of content consumption from a single platform to a variety of platforms to better suit its audience.

Media Prima also aims to disrupt the advertisement industry. Instead of relying solely on traditional media such as TV, radio and print ads, the group is utilising new ways to advertise via mobile apps and games to complement other methods of advertising. Humans generally dislike being targeted for advertisements, however, avenues such as mobile games allow advertisers to reach out to their audiences in a less intrusive manner.

One does not need to play hardcore games such as Counterstrike or League of Legends to be considered a gamer – in fact, almost every smartphone users would have at least one casual game installed in their phone (that is, Candy Crush, Temple Run, casino-related games) and they can be categorised as casual gamers.

According to a report in 2017, an average gamer spends about 24 minutes per day playing games on their mobile devices and this is an opportunity for advertisers to tap into because this platform allows advertisers to reward gamers for watching their ads or interacting with their products in the game. 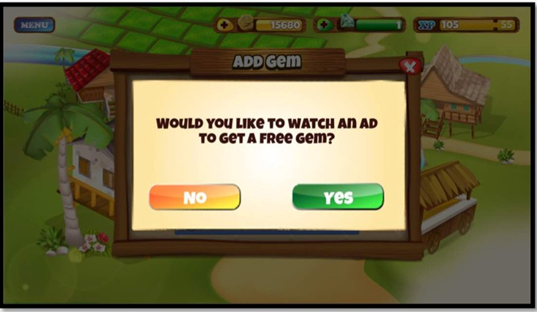 An example of an in-app advertisement.

Players can opt to watch ads to receive more coins, which can then be used to buy more in-app items without having to spend real-world money. Essentially, they are paying for these in-app items with their time.

These players are more likely to interact with the advertisements because psychologically they were given the option to choose as to whether or not to watch these ads instead of being forced to watch them. The act of rewarding players for watching an advertisement activates the reward system of the brain thus increasing the release of dopamine, which positively reinforces the behaviour because it makes them feel good.

Over time, players will keep watching more advertisements because the brain will associate that act with rewards and a pleasurable feeling, which is why it is an effective form of advertising.

Jumping on the bandwagon

Apart from embracing digital transformation, the group is investing heavily in the new global trend of e-sports. e-sports is a billion-dollar industry that has grown tremendously in recent years with many game publishers organising eSports events and new TV channels sprouting to broadcast these events live.

To non-gamers and the general public, this may not make sense at all – why are people watching other players play video games? However, the concept is similar to that of people watching traditional sports matches such as football.

According to Newzoo, there are 14 million gamers in Malaysia alone and they contribute US$586.7 million in game revenues. Gone are the days when parents nag their kids to study hard for a better future.

These professional gamers are gaining their limelight on stage and making a fortune from playing video games. It may sound like an easy task, but these hardcore gamers invest countless hours to train themselves and sharpen their skills to be the best players in the industry, similar to athletes who spend time rigorously training before a big sports event.

Media Prima Labs wanted to be a part of this global trend and developed a local gaming site named MyGameOn to share reviews and news on the gaming scene.

Setting up this gaming website was just the first step towards venturing into this space. After setting up the new gaming website, Media Prima took it a step further by collaborating with Garena to run a few e-sports events and promoted it during one of its biggest on-ground events this year – Gegaria Fest. Not only were there a number of participants taking part in the competition, there were also a huge crowd spectating the games. 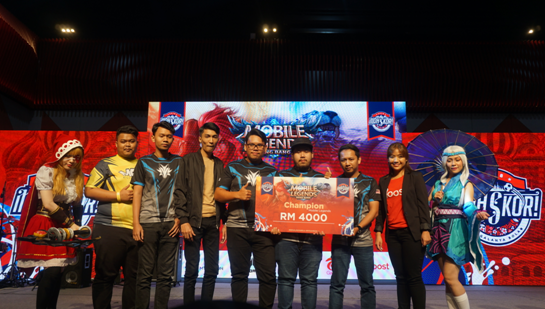 An eSports event by Media Prima at Moh Skor.

The overwhelming support from the public towards e-sports only encouraged Media Prima to explore and do more in this area. In line with Malaysia’s Youth and Sports Minister Syed Saddiq’s plan to make Malaysia the e-sports hub in Asia, Media Prima is looking to work closely with the government to further promote eSports to youths.