Morning Studio works with brands to deliver engaging and even immersive multimedia experiences to the readers of the South China Morning Post (SCMP) to achieve marketing objectives. In July, it worked with Tiffany & Co to roll out the “Celebrating Love” series to promote the brand’s #believeinlove campaign, and to tie in with a limited-time pop-up bridal salon at The Landmark.

After communicating with the luxury jeweller, the team proposed two video-written articles about real-life Hong Kong love stories to demonstrate how love triumphs all. A husband-and-wife pair and a same-sex couple were identified for their intriguing romantic journeys.

The idea behind it was to “touch the hearts” of readers with love stories to which they can relate.

Episode one was about long-time Hong Kong residents Natasha Clausen and her husband, Richard, whose romantic journey began at Cape Town’s airport when then-24-year-old Miss South Africa contestant was travelling to Johannesburg for the pageant.

That fateful encounter resulted in a loving family with two beautiful children, and Clausen being crowned Mrs Hong Kong World this year. Episode two was about Hong Kong-born Eurasian Tim Loo and Venezuelan John Gil, who had the “People you may know” algorithm to thank for their love story.

Their shared experience of growing up gay in religious families had them fall in love on their very first date. The two couples were chosen to tap into two distinctly different demographics. The two video episodes with accompanying written articles were hosted on pages designed and developed by SCMP, and two cut-down versions of the video were made for social media.

A photo shoot of Tim and John visiting the pop-up bridal salon was arranged to generate more buzz on social media, and the campaign was further supported by two eDM blasts, three Facebook posts with additional media boosting, and additional social media distribution on Twitter and YouTube.

The content was produced as editorially driven stories about these couples. The page contains a label saying “In partnership with Tiffany & Co” but the interview subjects were not asked to mention the brand. Product placement, advertising banners and a call-to-action button were employed to raise brand awareness.

In September, technology company SAP turned to Morning Studio for branded content that aimed to promote its digital solutions for corporations.

Under the theme “Intelligent Enterprise”, the team proposed two video-written articles that show how visionary companies go through digital transformation to help them get ahead in the game.

For the first episode, the team reached out to one of SAP’s clients, Ocean Park, and interviewed senior management of the iconic theme park about how e-learning and people engagement solutions have enabled it to better equip and incentivise its workforce. 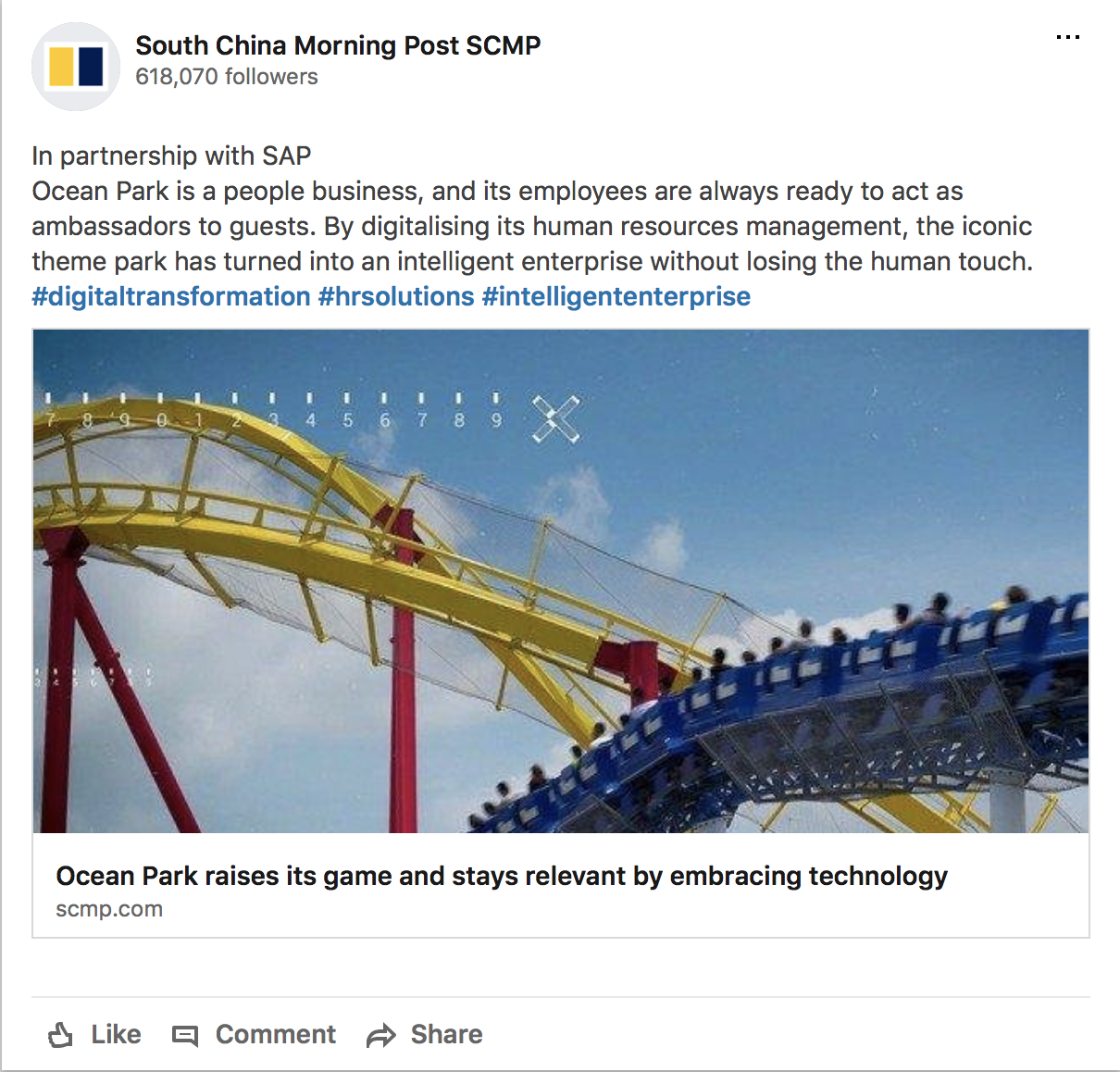 The story angle focuses on how for a company, where 80% of employees come into contact with customers, recognises that beefing up its human resources management through technology is crucial to its continued competitiveness.

The second, about how a leading property developer in Hong Kong plans to become a pioneer in a relatively conservative sector and transform its financial management through digitalisation, is in the works.

The articles are presented on dedicated pages with a banner ad that draws readers to SAP’s official website and an editor’s note in the article to draw attention to the company.

Morning Studio’s other ongoing projects include one in partnership with New World Development, which showcases stories of residents in To Kwa Wan, an old neighbourhood in transformation. Advanced digital videography plays a major role in this visually driven series.

The Master Report: Surviving the new era of digital news