Over the weekend, a day long disruption in Singtel’s broadband services left customers frustrated and angry. While complaints flooded social media, both on the group's page and on consumers' private pages, one user complaint particularly stood out.

Here is what the consumer said in the post:

The complaint, which was posted on 3 December around 9:56pm, caught a lot of eyeballs gaining over 503 reactions, largely positive and 208 shares (at the time of writing).

Replying back around 9 am yesterday, in a rather unconventional manner, a Singtel social media representative named Nurul  "rapped" back to its customer, in a similar fashion, in an attempt to make peace. 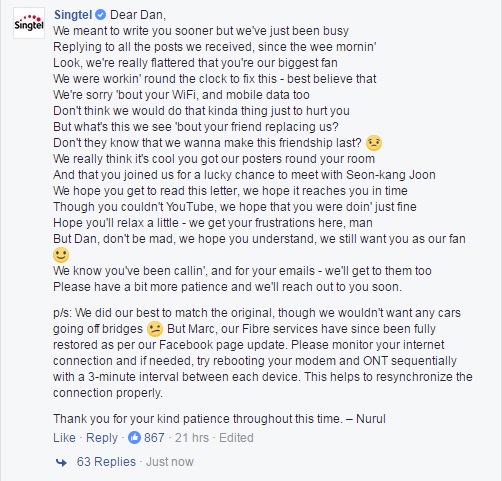 On Facebook, Whalley complained about the brand taking a significant amount of time exchanging his order. The complaint came in the form of Eminem’s hit rap “Stan”. The company had replied back to one of the customers in a similar fashion without getting too agitated.

Of course, the similarity is undeniable but does it matter? By responding this way (even if the whole exchange was set up by Singtel), the brand has found a clever way to defuse and deflect the tension.

Fiona Bartholomeusz, managing director of creative firm Formul8 said while they say imitation is the best form of flattery, in this case the similarities are way too close for comfort to the ASOS example and seems "like a rip off" to her.

"The likelihood of a response being reviewed, drafted from scratch, approved by Singtel within a day on a weekend is highly unlikely. More so when their priorities and focus should be about addressing the fibre broadband downtime and not engaging in rap battles with customers no? I’m a-wondering if this is actually planted by Singtel?"

Preetham Venkky, chief digital officer KRDS, did not deem the move to be similar, but rather a "coincidence". He added that in a socially connected world, rules around customer service engagements have changed.

"It is quite endearing to see Nurul respond in an interesting manner by treating the challenge as an opportunity for creative expression. No hierarchy, no approvals, no rounds of revision, just authentic conversations and responses. I would love to see more brands give such free play to their customer care teams," he said.

Marketing has also reached out to Singtel to ask if the brand was aware of the stunt pulled by ASOS in the past and also if the consumer complaint was actually "planted" by Singtel.

Whatever the case might be, it is safe to say imitation is indeed the sincerest form of flattery.