Despite retaining its status as the ASEAN’s most valuable banking brand, DBS dropped four places in the global 500 rankings, and got pushed out of top 50 banking brands globally. Last year the brand came in at the 48th position. However this year it has dropped to 52nd.

According to Samir Dixit, managing director of Brand Finance Asia Pacific, this was because DBS was “getting stagnated” and needs to get out of its “I am a big brand” comfort zone.

“It needs to start to focus on the brand in a more structured manner if they want to remain competitive regionally and globally and continue their brand value growth and ranking growth,” Dixit added, saying that as the number one brand in the country and region, it needs to look beyond to its global ranking and competitiveness.

He added that nonetheless, DBS’s acquisition of ANZ has not yet been fully factored in its revenues hence its placing in terms of ranking and competitiveness may change.

Will UOB take over OCBC?

OCBC and UOB both improved their global rankings with UOB having significant improvement in brand ranking. 2017 saw UOB gaining speed and getting closer to OCBC, which is at second place in ASEAN. The former gained 13 places to be ranked at the 66 spot as most valuable bank brand amongst the rankings.

UOB’s brand value also grew by US$857 million which allowed it to cross the US$3.5 billion mark.

According to Dixit, overtaking OCBC however will not be easy as the impact of its Bank of Singapore acquisitions of Barclays has yet to be fully factored in its revenue, hence the gap may widen once more.

“UOB cannot rest as 2018 will be a more competitive and decisive year for the brand rankings of the three Singapore bank brands. OCBC has been the number two for a long time and is clearly under threat by UOB, at least this year, as evident from the growing brand strength and brand value of UOB," he said.

He added that OCBC however is a strong AAA rated brand and it will be an interesting space to watch for the next two to three years as UOB tries to topple OCBC from its current position in Singapore and in ASEAN. 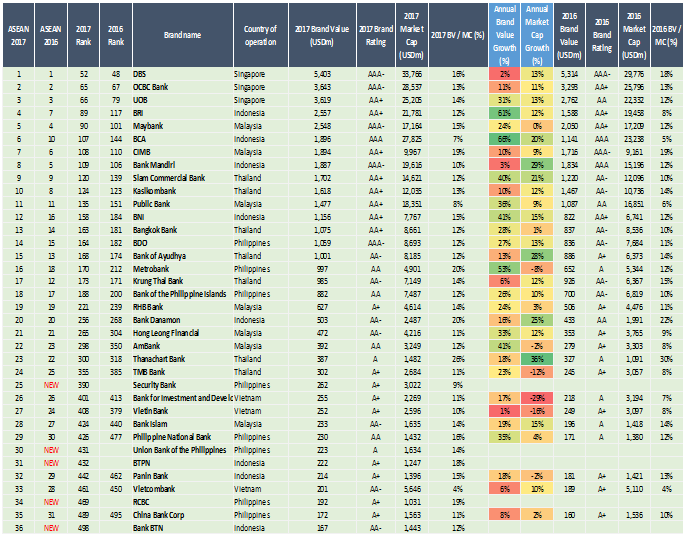 ASEAN brand value percentage increase was one of the highest in the world an in line with the Chinese Brand value growth of 25%, said the study. It also noted ASEAN’s consumers’ growing affinity for brands and branded goods, which is helping set a more solid foundation for competitive brands in the region.

A majority of ASEAN brand value increase was contributed by the Indonesian and the Philippine’s banks. There are also a total of 36 ASEAN bank brands in the “Brand Finance Top 500 Financial Brand Ranking 2017”, up from 31 brands in 2016.

The increase in brand values of ASEAN bank brands can be attributed to the strong growth of the ASEAN region as a whole, coupled with a consumer preference for home grown brands. The recent growth of ASEAN bank brands has also been due to accelerating mergers and acquisitions activities in the region, which have been providing opportunities for the ASEAN banks beyond its growing domestic market.

“Singapore bank brands are seen to be more competitive vs. the global banks and are positioned to grow and expand into international markets, and not just regional. Their crucial regional foot print is enabling good growth and helping establish their reputation with potential clients across the world,” Keng Yong Lim, director at Brand Finance Asia Pacific, said.

Globally, the combined brand value of China’s lenders surpassed that of the United States, China’s bank brands account for 24% (US$258 billion) of the total brand value of the Banking 500, while the US accounts for 23%.

The success of the Chinese banks and ICBC in particular comes at the expense of Wells Fargo, which has lost its position as the world’s most valuable banking brand.

“With a total of 46 Chinese bank brands in the global 500, China has managed to displace the world  number 1 Wells Fargo and is fast gaining international recognition. The combination of domestic loyalty and formidable brand equity has contributed to the growth of brand value for China’s banks,” Lim added.