Lowe and Partners Malaysia's executive creative director, Zaidi Awang shares with us his proudest moment and who he looks up to the most.

Zaidi is new to the agency, but not to the ad world, having joined Lowe and Partners in February this year. Prior to joining Lowe, Zaidi was with Leo Burnett Malaysia, where he spent eight years leading the team with brands such as Maybank, Petronas, Proton, Celcom, Malaysia Airlines and McDonald’s, and has a string of key awards to his name.

Here’s the man behind the work:

I have loved art and design from when I was very young. My primary school teacher always assigned me to help her with posters for science and so forth.  When I was 13, I was elected to be the president of school art club, and designed the school’s bulletin board, posters, banners and mural paintings.

In fact, at school I got into the science stream, much to my dad’s delight. He’d always tried to steer me to become a science major. But I went on to study art and design later. For me science is logic, art is aesthetic.  In advertising, you need both: logic and a feel-good factor to like, to believe and to buy. So it all worked out for the best in the end. And thank you dad.

Good ideas do not sail through.

When the late Yasmin Ahmad called me to join her at Leo Burnett , and of course joining Lowe Malaysia.

A mistake in your career you won’t forget

Refusing good offers from other places before this, and not stepping up [complacency ].

The late Yasmin Ahmad.  A charmingly funny person, who you could equally enjoy talking rubbish and very intellectual topics with. On top of this, her work is very real and insightful. It touches people, makes you laugh, smile, or even tear.

Over my 12 plus years working with Yasmin, she was a most pleasant encouraging person, and taught me lessons I still hold to today: Be humble. Be likeable. Only be afraid of God. 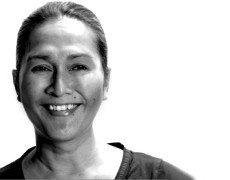 You’re a bunch of conmen.

None. I suppose I have been lucky!

You’re wasting your time in the wrong field.

No particular preference.  But in general I think a great client to work with is one that can see the big picture and not get stuck with nit-picking. Also, a client that treats its agency like a friend and an equal, as a partner, not a supplier.

Never settle with what you have.

My dad still wants me to be a doctor.

Eat, sleep and be merry!  (Thai noodles are a favourite!)

Creative Catch-Up is an ongoing series with Malaysia's top creatives.