The Beer Factory has said it was behind the crazy woman video that went viral last week.

The video started off with two women in an intense situation when their request for beer was somehow denied. One of the angry ladies demanded for an answer to where is her pint of beer is after which she bashed the waiter with her handbag.

A marketing campaign for the upcoming Arthur's Day Celebration coming up on 27 September, Beer Factory has since put this poster out on Facebook, carrying the disclaimer:

"The recently uploaded viral video on YouTube entitled "Crazy woman beats up Beer Factory waiter over Guinness" is a work of pure fiction, recorded and produced by us.

We sincerely apologise to anyone who felt that the video post was offensive or inappropriate.

All names, characters and the incident itself were fictitious products of our imagination. Any resemblance to actual events or persons, living or dead, is entirely coincidental.

The iconic brand GUINNESS and GAB (Guinness Anchor Berhad) are no way associated nor had any knowledge or input on the planning and the production of this video. 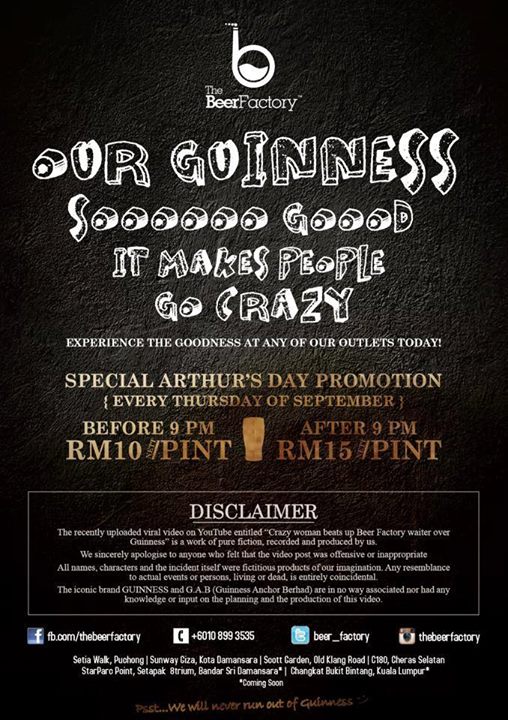