Circles.Life has published an ad on The Straits Times, and addressed it to fellow telco friends. Known for its cheeky ads and marketing stunts, Circles.Life thanked Singapore for ranking it as the number one telco in the country. According to Circles.Life, customers lauded the telco for having the best digital experience, top in customer service, easiest to use and switch to, as well as ranked first in recommended brand in Singapore by YouGov's survey.

In the ad, the telco said: "Our customers are the best. We're grateful and humble to have each and every one of them in our experience. Thanks Singapore for continually ranking us #1. Must be all that 'power to the people'."

The bar graph in the print ad features three colours - blue (Circles.Life), green (StarHub), and red (Singtel). The green and red bars, compared to blue, seem to be drawn low in ranking intentionally. Meanwhile, the telco also sent individuals dressed as cats to test its 4G network. According to Circles.Life, the telco chose cats as just like how cats get into every nook and cranny, its 4G+ coverage does too.

These "cats" went all around Singapore, and some of you might have seen their feline friends on trains and public places sipping on coffee. 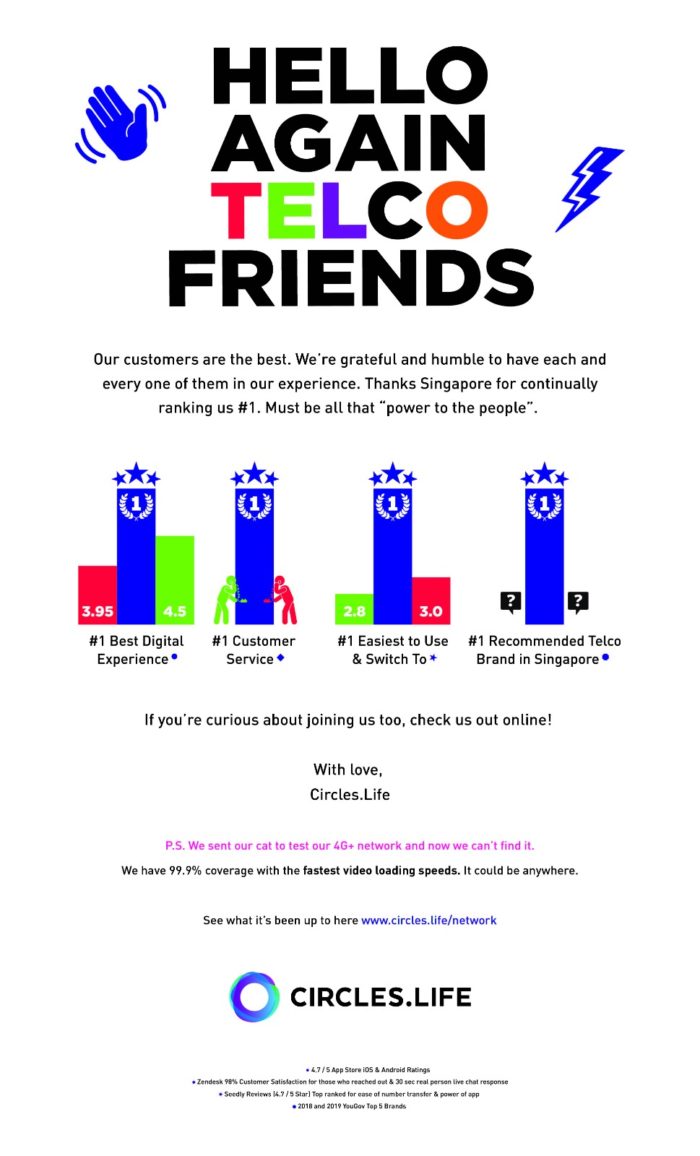 If this looks familiar to you, that's because Circles.Life did something similar last year. The founders of Circles.Life released a letter on The Straits Times and The New Paper addressed to fellow telcos “red” (presumably, Singtel) and “green” (ironically, StarHub) in Singapore for “finally recognising that its customers are not happy”.

Instead of advertising its mobile plans and benefits, in the open letter founders (and former subscribers of red and green) Rameez Ansar, Adeel Najam and Abhishek Gupta said they faced lock-in contracts, poor customer service and rigid mobile plans just like the rest of Singaporeans. In the letter, the founders shared that Circles.Life was created for all the “frustrated Singaporeans just like them”.

Circles.Life also launched a microsite targetting Singtel’s all-digital mobile product GOMO, saying that users who switch from Singtel’s GOMO plan to Circles.Life are entitled to SG$120 cashback and SG$34 off registration. In a subtle dig at competitor Circles.Life, Singtel dropped a report card in the form of a rap video. The rap, by “Ah Boys to Men” actor and local rapper, Tosh Zhang, lyrics read: "Some other telco dissed us for relevancy. We think that they should go and get a L-I-F-E."

Meanwhile, new telco in town, Zero Mobile also took a shot at Circles.Life’s founders’ letter with a version of its own. Published on its website, Zero Mobile said Circles.Life’s letter is “preoccupied with alternative facts”. In Zero Mobile’s open letter, it calls out Circles.Life for saying it’s the “world’s first digital telco” when in fact it is a mobile virtual network operator (MVNO) and not the “first one of those” either.