"We are offering single seats only," the description of the Valentine's Day campaign launched by Hong Kong Movie app and Metroplex reads.

Dubbed "Bigger courage for Valentine's Day (情人節氣魄更壯)", the cinema and app have joined hands to ban couples from buying the tickets of one particular movie screen time on the festive season. 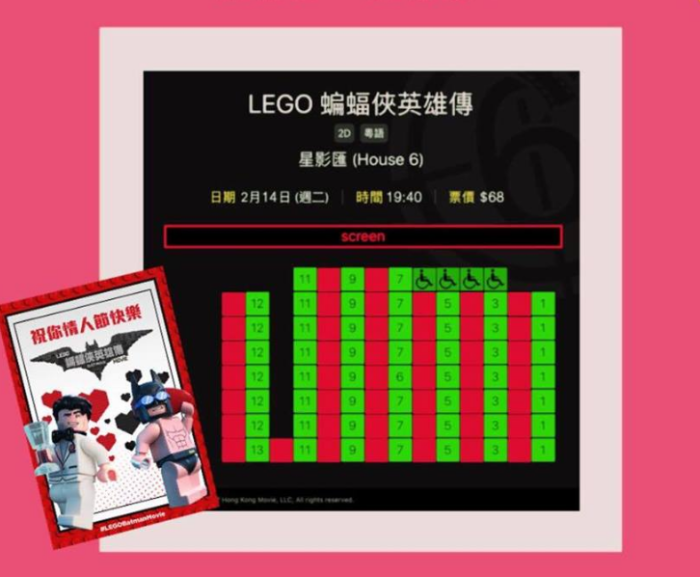 The two companies split seats in half, selling only single or even-numbered seat on separate platforms for The Lego Batman Movie which is to be screened at 19:40 on Valentine's Day.

"If you are fed up with public displays of affection, no worries. You won't see any lovers at this screening time," writes Hong Kong Movie's promoting website.

Different platforms will offer different free snacks, for instance popcorn or chocolate, to comfort the loners. Announced solely on the two companies’ Facebook pages in early February, the idea almost instantly broke the local internet. No advertising, and all tickets were sold in four days - a total of 97 tickets in the medium-sized house, a record fast for a movie event with no celebrities endorsement. 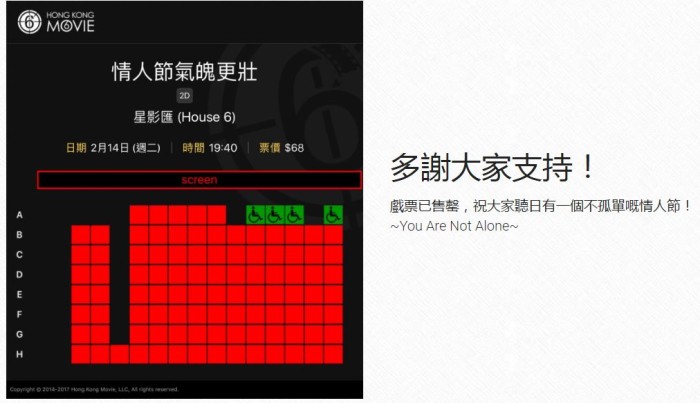 Candy Wong, marketing manager at Metroplex, said her mind was blown by the overwhelming response.

She said the campaign has fulfilled its aim to build brand awareness for the independent cinema.

"The idea was first proposed by Hong Kong Movie," Wong explained. "We've witnessed loners sharing their evil plans on the internet, and one of them is to buy so many tickets that only single seats are left at a cinema prime time on the Valentine's Day. We wanted to turn it into reality."

They've carefully chosen The Lego Batman Movie so not to create a romantic mood, Wong added. "We figured Fifty Shades Darker will be too embarrassing for a full house of singles to watch."

"The participants are also more than welcome to dine with their neighbours after the movie," Wong laughed.

The campaign has generated more than 17k likes and 2.3k shares on the official Facebook pages, not to mention digital and print media coverage. Wong said the cinema will look into holding similar events in the future.