Even as the airline’s business is being heavily impacted by Hong Kong’s ongoing protests, Cathay Pacific has made a patriotic post on its official Weibo account in advance of China National Day, attracting criticism from Hong Kong netizens.

The post published on 29 September read “Recently when you are ready to board the aircraft, have you noticed that there is a little red flag near the boarding gate? While National Day is approaching, Cathay Pacific invites you to join in a photo-taking campaign (我和國旗同框) launched by CCTV.” 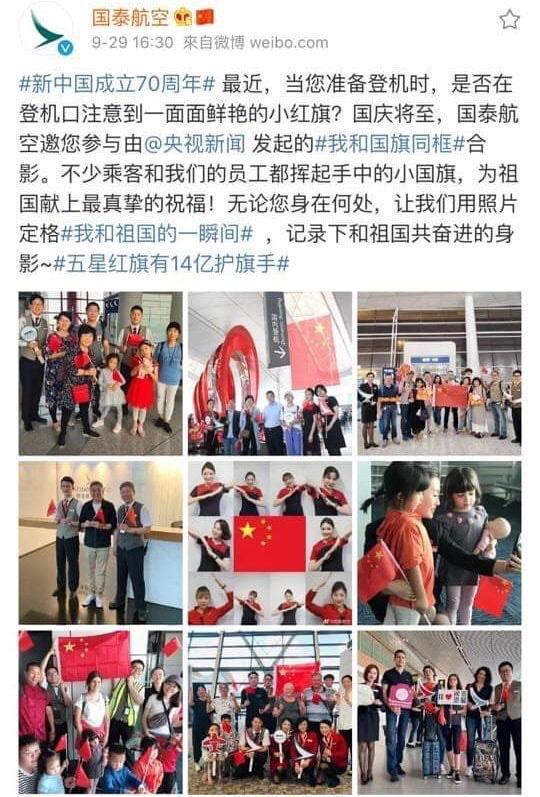 “Plenty of passengers and our employees are waving the flag, offering our most sincere blessings to the motherland. No matter where you are, we would use photos to capture the moments of ourselves and the motherland, recording our endeavours with the country,” it said.

The oddly-timed post, considering the current situation, for the city’s carrier is not being well received by Hongkongers sharing it on social media. Reactions have been running the gamut from pity to outrage, with some users sympathising that Cathay Pacific has little choice but to comply with requests by the mainland to (in this case literally) wave the flag. Many other comments have said that the airline can no longer count itself as an independently functioning private company or even a Hong Kong company anymore, as this post follows the politically charged firing of cabin crew, ground staff, and pilots in recent months.

Since August, Cathay Pacific has experienced a series of management shakeups and sustained pressure from Chinese authorities in relation to Hong Kong’s protests. It’s been reported that the airline has terminated multiple employees for expressing support for the protest movement, firings that have attracted negative feedback from Hong Kong netizens, with some spreading the sentiment that this is some form of betrayal to the Hong Kong people and has created what is being called “white terror” within the company.

Adidas Originals rolls out a series of social gaming platforms for 3,000 people expected to attend its "Unite All Originals" live ..

STB has outlined several initiatives and partnerships to ramp up its tourism efforts in 2015...

Using an animated character and colours inspired by the cautionary road signs of Japan, the campaign call for attention on the roa..

Despite no longer holding the sponsorship for the F1 Grand Prix, SingTel’s shadow is still looming over marketers' minds, says a n..

According to Gebiz, the mandatory briefing session will be held on 12 April 2019...