Innovation is one of the keys to success. Carlsberg Group still keeps up with the times by constantly pursuing better beers, including optimising its products. Carlsberg Asia’s marketing and sales vice-president Matteo Fantacchiotti believes premiumisation is the future for the Danish brewing company.

In 1847, Danish industrialist and philanthropist Jacob Christian Jacobsen founded Carlsberg on the outskirts of Copenhagen, Denmark. Now, the group is one of the most prominent brewers in the world, while it also takes prides in its long history and rich heritage

As a company with more than 170 years of history, Carlsberg Group has its fingers on the pulse to maintain its leading status in the industry – and one of the strategies is to premiumise its products.

“Our growth is coming from selling higher-priced products to people who are a bit more curious about the beer they are drinking,” Fantacchiotti says. “We will continue to sell premium brands and there is a big opportunity to sell more super-premium and specialty brands.”

Premiumisation creates the bridge between the desirability of luxury and the function and necessity of the mass market. Meanwhile, the economic growth in some Asian countries is one of the driving forces of Carlsberg’s business.

According to Euromonitor International’s research over beer consumption, China accounts for about 27% of global consumption.

In addition to China, Japan, Vietnam, India and South Korea are also big markets in Asia. These markets account for more than one-third of beer consumption in the world.

“The increase in the population of the middle class offers opportunities for us to roll out premiumised products,” he says. “Urbanisation in some Asian countries such as Nepal, India and Myanmar also opens up opportunities to offer premium beer.”

Localisation is also a key concept among marketers and Carlsberg is no exception.

For example, Wind Flower Snow Moon Specialty is originally a local brand in the Yunnan Province in China. Relaunched in China in February 2019 in the super-premium segment, it is priced even higher than some international premium brands in bars and restaurants in China. The company believes that other than its flavour, its Chinese name with cultural nuances is also the key factor in the product’s success.

Meanwhile, in Hong Kong, Carlsberg, in partnership with Brooklyn Brewery from the US, has launched Yau – a premium craft beer brewed in Hong Kong already.

In Laos, Carlsberg has launched three Beerlao craft line variants, including Beerlao White, Beerlao Amber, and Beerlao Hoppy. These new products aim to solidify its reputation as a vibrant, yet innovative brand, while they also allow Beerlao to appeal to and stay relevant to the younger generation.

While upgrading the quality of products is crucial to the Carlsberg Group’s business, it also rejuvenates the image of its flagship Carlsberg brand by adopting a new design and packaging.

The new design and packaging are one of the latest examples showing how Carlsberg Group has been constantly substantiating its “Probably the Best” in a meaningful way. The improvement includes a redesigned packaging of bottled beer, and a new bottle cap to siphon excess oxygen from the bottle, which can preserve the taste of the beer better. It has also switched to a greener green ink on its bottle labels for better recycling. 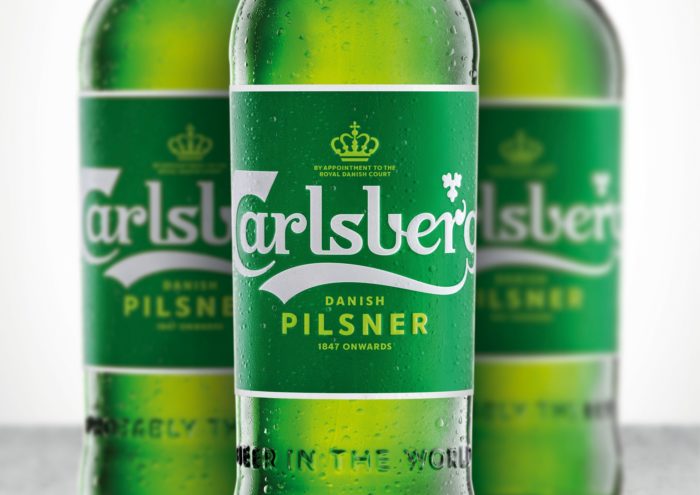 Meanwhile, the public is now pursuing a healthier lifestyle and looking for sugar-free or alcohol-free beverages. Fantacchiotti agrees that the number of drinking occasions is now rising in Asia, and Carlsberg can play a more active role in offering diversified beverages.

“Alcohol-free beer could be an alternative,” he says. “In Europe, it’s common to consume alcohol-free beer, but the popularity of it in Asia is still incomparable to Europe.”

Carlsberg will launch a range of alcohol-free brews next year in Hong Kong to catch up with the trend. In fact, the alcohol-free Carlsberg 0.0% has already been available in Hong Kong and has seen warm consumer reception. Fantacchiotti also says that Hong Kong people are willing to explore new items.

“We will keep exploring more possibilities in our research laboratory. To help drive the growth of our business, we will continue to premiumise core products, both the Carlsberg beer and localised offerings.”