The ultimate aim of any shopper marketing strategy is to lure the shopper to make a purchase. While simple sounding in theory, it takes more than just one campaign around the point of sale to achieve that goal.

Despite the huge shopping culture in Asia, most businesses don’t focus on a shopper marketing specialist to support the function – often leaving the decisions to marketing managers.

While brands are increasingly seeing the need for good shopper marketing strategies, the opinion across the board is that many remain clueless on what that looks like. Areas such as location-based marketing and mobile, while on the purview of marketers, have yet to take off in a huge way.

A study by PwC in 2013 showed several trends in Asia. First, there is a high emphasis on brands for developing nations in Asia. Consumers said they were four times more willing to pay for access to branded apparel than shoppers in developed nations. Second a consumer’s network of friends and family is important in influencing shopping decisions. Finally, most shoppers from developing markets in Asia were more likely to shop online, said the study.

In April and May of 2014, Shop.org and Forrester partnered to collect marketing benchmark data from online retailers. In this latest version of the study, 81 retailers responded to the survey. The majority were multichannel retailers with sales across stores, catalogues, the internet and other channels.

About 32% of the respondents had interactive marketing budgets totalling more than US$10 million. Of those budgets, the single biggest allocation is to paid search programmes, which Google AdWords largely dominates.

1. Paid search continues to be the top acquisition channel for online retailers.

In recent years, paid search has dominated interactive marketing budgets; it is the largest budget line item and it’s the most effective. This year is no exception. Online retailers are also spending heavily on display ad programmes such as remarketing and behavioural ads, which they see as increasingly effective in acquiring customers.

More retailers say they plan to spend more of their budget on paid search programmes than on any other tactic in their marketing arsenal.

This relatively new vehicle straddles both search and comparison-shopping engines and is growing in size/popularity, generating more revenues for Google’s coffers. Retailers say that Google Product Listing Ads form their third-biggest area of increase in interactive marketing spend this year.

■ Search engine optimisation (SEO) is also a significant, but inexpensive area of focus.

Retailers generally view SEO as a cost-effective, though difficult, marketing vehicle. It often requires significant behind-the-scenes efforts to adjust a site’s content or code base so that search engines such as Google surface it more prominently in natural search.

2. Mobile marketing spend is growing, but focuses primarily on tactics such as email.

Online retailers reported they were increasing their marketing spend on smartphones and tablets in 2014. However, they use most of that spend to optimise traditional interactive marketing messages for mobile devices, such as mobile emails, mobile paid search campaigns and mobile display ads.

As mobile traffic grows, it’s not surprising merchants are allocating more to mobile marketing initiatives. While the vast majority of retailers Forrester surveyed say they plan to spend more on mobile marketing efforts for phones and tablets in the coming year, those figures are even higher if a department other than e-commerce owns the marketing budget. Why? Because other store marketing teams are more likely to dedicate resources to efforts that drive store traffic versus just mobile shopping endeavours.

The majority of web retailers continue to use first or last-click attribution. Attribution models today have a number of shortcomings, including the fact they rarely measure behaviour across devices and stores. Complex marketing attribution remains problematic for a number of reasons, not least of which is the retail world’s interpretation of “multichannel”.

That difference in interpretation results in marketer-built attribution models that offer only a partial view of all the different touch-points that shoppers can engage with before completing a transaction. As a result, most retailers don’t use attribution models, preferring the tried-and-true, if imperfect, last-click model. 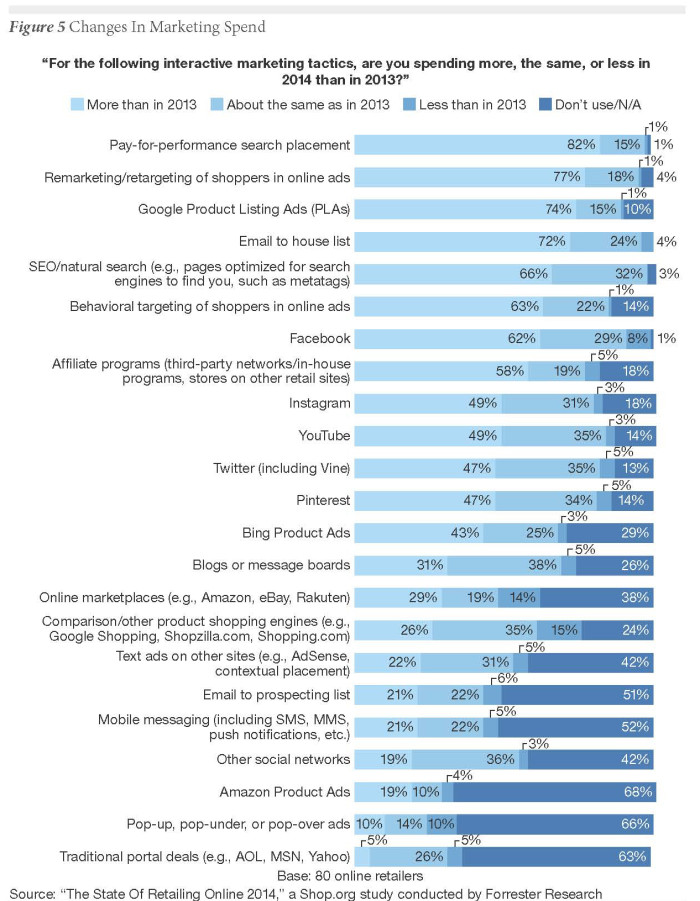