Beyond the faux pas: Social chatter and marketing stunts around Crazy Rich Asians

It seems like the world is going crazy over the buzz surrounding “Crazy Rich Asians” with the film predicted by Bloomberg news to generate double the revenue than initially expected. Warner Bros is said to have increased its five-day projection to US$26 million, a whopping US$8 million increase from what it had predicted last month.

Locally in Singapore, Marketing understands that Warner Bros has been working closely with movie houses to push out marketing initiatives to drive awareness, and the reception for the movie has been “overwhelmingly positive.” Warner Bros also works with Havas Media for its media planning.  However, the two did not comment on Marketing‘s queries when asked about marketing plans in Singapore.

Over the past weeks, the movie, as we are all aware of, has gotten a lot of buzz locally for the recent episode with the spelling mishaps of “Singapore” and “Passion Made Possible” during the movie premiere in Los Angeles. According to Digimind, local pride was strong among movie related discussions from 7 August to 17 August 2018. However, public discussions around Crazy Rich Asians started gathering momentum in Singapore on 9 August, with a sharp spike on 10 Aug, when the movie premiered in US.

How brands embraced the movie hype:

According to Digimind data, several brands also jumped onto the hype with make-up retailer Sephora launching a giveaway on Facebook that called for customers to spend a minimum of SG$100 to win prizes such as premiere tickets, or a makeover. Budget airline Jetstar promoted flights to Singapore and Malaysia, where the movie was filmed.

Visit Singapore and local media outlets covered the premiere in Los Angeles, which was pushed on social to earn more reach among followers.

Digimind said that by launching campaigns two-weeks before the Singapore premiere on 21 August, these brands were able to leverage hype around Crazy Rich Asians in a strategic and relevant manner. Publicising these offers on social, also helped them stay top of mind with specific groups of consumers; i.e highly engaged audiences ramping up for the movie’s release.

Other than the “Sincapore” fiasco, in which the “Passion Made Possible” logo melted during the LA red carpet premiere, other online conversations for the movie include : 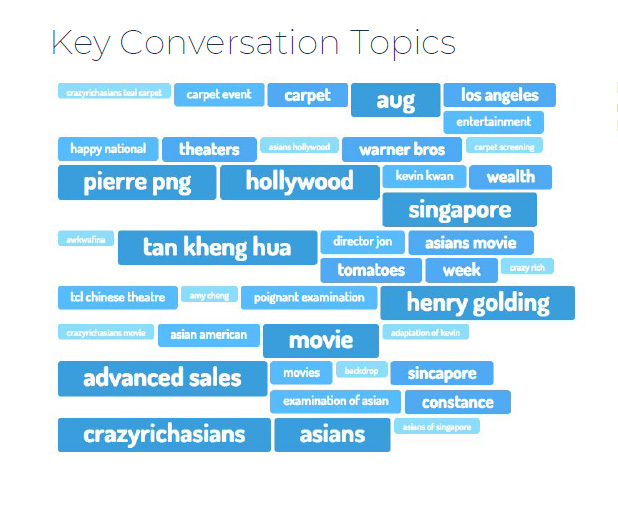 – Asian artists such as Pierre Png, Tan Kheng Hua, and Henry Golding, who were among the cast.
– The praise of “poignant examination” of “Asian American[s]” in a romantic comedy.
– References to Rotten Tomato, an American review aggregation website for film and television, as the
widely heralded benchmark for films.
– “Advanced sales” by theatres like Cathay Cineplexes and Shaw Theatres.

MyBurgerLab cooks up the Peri-Peri burger in collaboration with Nando's

MediaTech has launched a new LED display screen at the junction of Orchard and Cairnhill Road...

This is a nifty little launch by Google to celebrate CNY will only be available until the end of the festivities. Check it out...

Based in Singapore with offerings extended across Asia, the lab will provide Tribal's clients with scientific neuromarketing resea..