Marketers at Miramar Group, which owns the franchise rights to School Food in Hong Kong, wants steady growth through a step-by-step marketing strategy that cross-sells other restaurants owned by the group.

Last week, the group opened its second School Food restaurant in the city, located in Shatin’s New Town Plaza with a campaign to raise awareness about the opening.

“Our approach is to market the entire group of eight brands under Miramar, not simply individual restaurants,” said Amy Lee, director of group marketing and corporate communication at Miramar Group.

“It’s not about trumpeting the opening of the Shatin School Food, and becoming so popular that our operations can’t support it. Instead, we want to grow step-by-step. That’s why we want to target residents in the neighbourhood with a very focused and location-specific campaign.”

For example, in the first ten days after the opening, the group ran a photo booth which will take photos of you with props, print them out and allow you to slot them into special School Food frames. 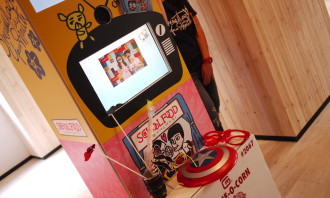 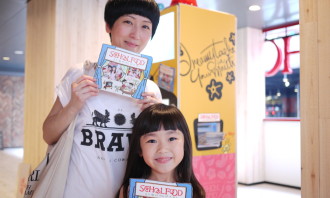 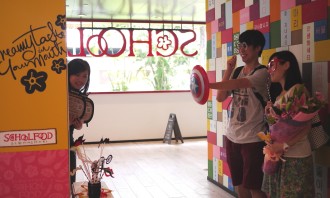 Apart from being a marketing gimmick that attracts young K-pop fans, the photo booth also helps gather a database of contacts for the group’s newsletter.  Before they can operate the photo booth, users must scan a QR code and fill out basic information such as their name, email and phone number and choose whether or not to tick a box consenting to receive newletters from the group.

Lee said, “We have received over a few hundred contacts so far.  If they have agreed to receive a newsletter, the eDMs we send out will not only contain information about School Food but also news from other restaurants within our group.  This cross-sells the restaurants and this way, the ROI is much more measurable.”

To keep the campaign location-specific, the group did not organise a flash mob of K-pop dancers like it did for the opening of the Causeway Bay restaurant.

Instead, in the first two weekends after the opening of the Shatin restaurant, School Food has been running a popcorn stall outside the restaurant to give away free popcorn. 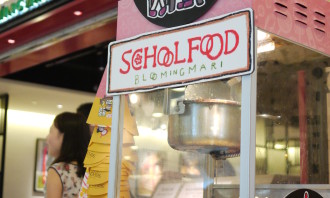 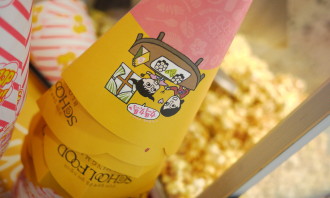 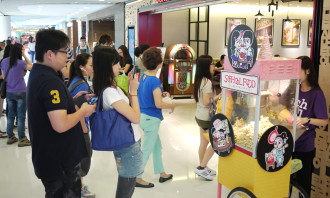 “Causeway Bay had many more pedestrian spaces where you can stage a flash mob but because there are a lot more families in Shatin rather than tourists and shoppers, we chose to do something indoors instead,” said Lee.

Even its advertising campaign is specific to Shatin.  The franchiser, School Food in Korea has created a promotional video incorporating K-pop elements that will be aired on TV screens in New Town Plaza starting next month.

For the Causeway Bay opening last summer, the group had created a video personifying ingredients used at the restaurant, which was broadcast online and in MTR stations.

At the other end of Shatin Town Plaza is a street-facing front porch bearing School Food signage, serving as a de facto out-of-home ad.

The group estimates that the Shatin restaurant will attract 16,000 customers every month.

The new restaurant is part of the first stage of the group’s expansion plans this year. It plans to open two more School Food restaurants – one in Festival Walk in mid-June, and another in Telford Plaza later this year.

“We mainly target locations with high traffic such as shopping malls with cinemas. We will consider any location on Hong Kong Island and in Kowloon and the New Territories if it meets our requirements,” said Lee. 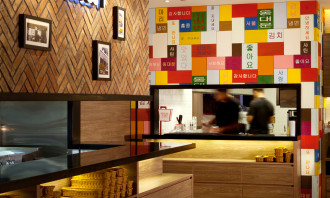 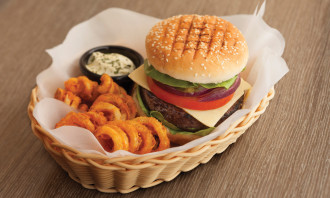 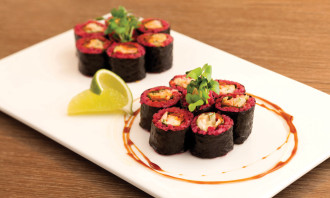 She added, “The K-pop wave has long swept its way through Asia and this has provided opportunities for Korean restaurants to expand in Hong Kong. For example, we had a frenzied sea of people coming for Korean fried chicken with beer because of a recent Korean TV drama that was very popular.”

Colgate banks on the moment of truth

After a year of aggressive acquisitions, Yahoo is making clear its plans to be at the center of the online advertising ecosystem, ..

The finalists have been named for this year's Mob-Ex Awards Hong Kong. Did you make the cut?..