Uber has started its food delivery service with new app UberEATS in Hong Kong, attempting to get a finger in the rich pie of the burgeoning food delivery business.

The new app, now available for download, allows its users to order from over 250 restaurants, located mostly on Hong Kong Island, 20% of which have never had a food delivery option before. The app categorises the restaurants by location, so users can reach restaurants nearby, or they can search by specific cuisines and ingredients.

Restaurants include Chôm Chôm, Jinjuu, The Chop House, Apinara Thai Cuisine and Bar, F.A.B (French American Bistro), Loyal Dining, Kung Lee, and more. The services hours are between 10 in the morning and 10 in the afternoon. During the launch period, the app requires no minimum charge and charges no delivery fee.

The new launch marks Hong Kong as UberEATS' third city in Asia, following launches in Singapore in May and Tokyo in September this year. The app is now available in 42 cities in 12 countries worldwide, including San Francisco, New York, Los Angeles, Paris, London and Sydney.

Ricky So, sales director of UberEATS Hong Kong, told Marketing that the app sets itself apart from other food delivery apps by including three unique features, "With strong logistic assets, UberEATS is the only App that allow users to track both the couriers and the restaurants' real-time status and location, plus the user experience is simple and convenient. Our greatest asset is a database of seven-digit number users who have downloaded Uber in Hong Kong, who can sign in to UberEAT with the same account."

He added that the group is looking to partner with more restaurants in different locations.

While challenges include avoiding traffic jams in the small city, Horace Lam, general manager of UberEATS Hong Kong, said the group has recruited couriers in different shapes and sizes. "It doesn't really have to be a Tesla," he laughed. "Some couriers travel by motorcycle, some on foot." He said the company is unable to disclose the number of couriers in Hong Kong. 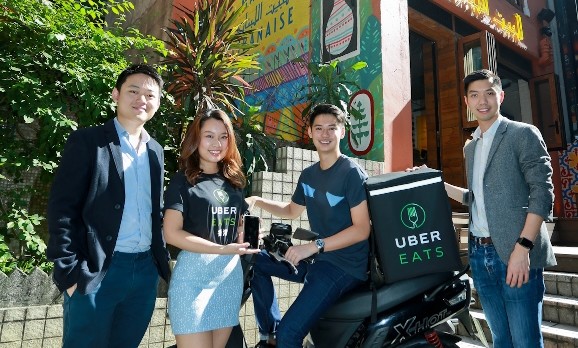