Circles.Life has made a name for itself with its cheeky and bold social media stunts. However, its recent social media post riding on the trending conversation around race - after a video was published by one netizen Dave Prakash - saw the brand in a little bit of a sticky situation with netizens calling out the post for being tone deaf.

Reacting quickly to the netizen sentiment, the brand then put out another post trying to make the situation right, only to receive a second wave of backlash from netizens. While some netizens labelled the reaction as “one of the worst responses to a PR disaster” in the comment section, Circles.Life firmly stood by its post saying that it will continue with the conversation.

Head of marketing Delbert Stanley Ty shared with MARKETING-INTERACTIVE that the posts were created in line with the numerous campaigns Circles.Life has created to promote inclusivity - the most recent being the Family Plan, where the telco challenged the social construct of a nuclear family. Ty added: "We're going to continue the conversation as we always do, in an honest, sincere manner. We know that our post has stirred conversation and we're not shying away from it."

In recent months, race-related conversations in Singapore have seen a spike. In April this year, Singaporeans were introduced to Beow Tan’s Youtube channel that was dedicated to “harassing” and “cyberbullying” non-Chinese folks in Singapore. Following that, in May, Channel NewsAsia reported on a case where a man allegedly used racial slurs and kicked a woman for not dawning a mask while she was brisk walking resulting in ministers speaking up around the rise in inappropriate behaviour. The latest incident ignited by Prakash's video, which saw him engaged in a heated conversation around interracial couples, even gained the attention of home affairs and law minister K.Shanmugam who deemed it as “quite unacceptable” and “very worrying”.

According to social media monitoring company, Digimind, there was a 1000% spike, from 49 to 559 mentions surrounding racial inequality in Singapore on June 6, following the traction Prakash's video saw. 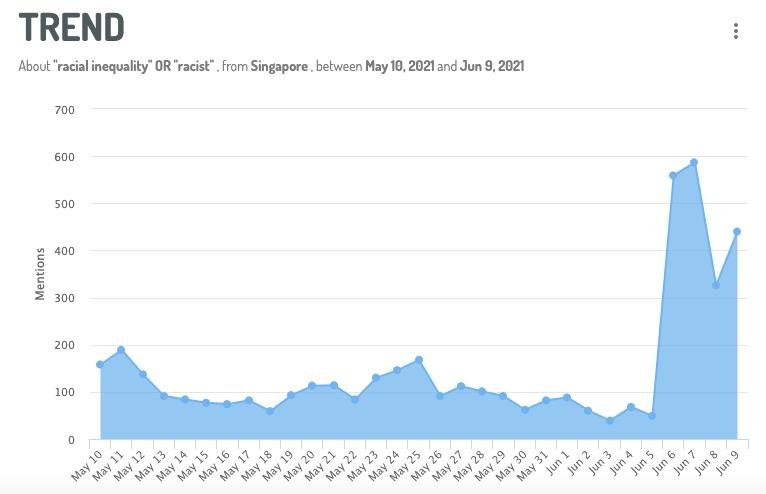 MARKETING-INTERACTIVE’s Adland's Diversity & Inclusion Index recognises Asia's change-makers who are pushing the boundaries and cultivating a culture for tomorrow. Nominate case studies of your D&I initiatives for workforce in Asia today!

While brands in recent times have gotten more comfortable in newsjacking, PR professionals MARKETING-INTERACTIVE spoke to say that when it comes to jumping on sensitive topics such as race and religion, brands still need to tread carefully.

Jin Ooi, managing director of strategic communications consultancy, Distilleri, said if there is even a slightest doubt on whether or not a conversation is worth chiming in on, brands should refrain. When joining important conversations, brands need to be aware of the parameters that surround the topic, and according to Ooi there are some “not so obvious” lines that cannot be crossed. He added that if one is not 100% sure about the sensitivities of the audience they are speaking to and the societal nuances, “it would be better to stay away from such topics”.

“Brands take a lot of time, money, and effort to build, but reputations can be destroyed overnight by a careless comment,” Ooi said. He added that the potential damage and the risk of offending or insulting customers is simply not worth it. “It is imperative to have diversity especially within your marketing and PR departments and agencies, so that sense checks can be done before a piece of communication goes out,” Ooi said.

Given we are now living in a world where the power has shifted to the people, with social media being the vessel of connection, brands need to take into account how this post will be perceived, said another PR professional under anonymity. She added that the initial post was neither humorous nor subjective. “Imagine if the post read that it was written by a woman and approved by a man. We have to acknowledge that we live in a world where one set of the population has traditionally been more advantaged be it for their gender, their race, their social status or other attributes. These sensibilities need to be taken into account without which, quite rightly, they will be labelled as tone deaf.”

Was the reaction post by Circles.Life a smart move?

Revisiting the telco’s statement where it said that it was not “shying away from its post”, Ooi said: “By not admitting that it has unintentionally offended people despite the negative feedback it had received, Circles.Life Singapore achieved the opposite result of its trendjacking and further alienated the very people it was trying to win over.”

He added that the telco should have humbly admitted it was a mistake on its part. “People are more forgiving to brands (and people) who apologise sincerely. Two wrongs do not make a right”.

Shouvik Prasanna Mukherjee, executive creative director at Golin added that brands need to humanise themselves when they have a point of view on matters that impact the lives of their stakeholders.  It helps create relevance and greater bonds with their consumers. “To err is human too, and consumers are more forgiving of brands that are ready to accept honest mistakes and make amends. A brand can hold its ground on matters of principle, as long as it has the humility to accept and learn from unintentional errors,” he added.

Taking a different view to the reaction, long-time PR consultant Carolyn Camoens said it was good of the brand to stand by its team during such a time as “cancel culture”. With that said, she added that the follow-up post “fell short in not making an outright apology for the misguided initial post”. She said that Circles.Life should have just taken the situation “on the chin and apologised”, adding that the brand should reflect on it after, and address the lapses that led to the error.

“Too often once the immediate crisis has been managed, teams move on to the next item on the 'to do' list without pausing to reflect and correct. This is an important part of any growth process and often gets overlooked in the deluge of daily tasks,” she said.

Camoens also said that when addressing topics such as race, it is best for brands to stay away from humour-slanted approaches. “There is really no good time to make light of race issues so unless a brand has a very strong position on racial equality, it’s best not to trendjack that topic,” she said. Moreover, brands need to be able to define its values and the issues that it is trying to address and ensure that the topic being trendjacked is aligned to the brand and its core values. It needs to have a credible and defensible position on the issue to make a statement.

Seconding the statement, Golin's Mukherjee said while participating in any social discourse be it race, diversity or equity, brands need to stay true to what they practice.

“External communications must be aligned with internal. Real-time storytelling at the relevant cultural moment can pay dividends, but it requires a well-considered, inclusive thinking to ensure conscious, empathetic communication. Humanising brands is good, but making them humane is more important,” he added.

Another PR professional, quoting under anonymity, added that racial matters need to be dealt with great sensitivity for how they are perceived - especially given the rising number of race-related injustices being shared on social.  “It doesn’t matter that the intent was good, the delivery too must be well thought through,” she said. She added that any such post needs to be cross-checked by a PR professional as they are best placed to view a creative output from a user perspective.

“We deal with the media all the time and have honed our ability to have an outside-in approach to communications messages. I don’t think any department has that capability, and particularly, creative teams are client-focused or in many instances, focused on craft,” she said.