AirAsia has partnered with Malaysian clothing brand Pestle & Mortar Clothing (PMC) to launch its “PMC x AirAsia: S.E.A. Pride” collection. The collection features seven clothing and accessory items, and aligns with the theme of celebrating and championing Southeast Asian culture and its people.

Available from 15 February onwards, the collection was designed by seven different Southeast Asian designers who were given full creative freedom to interpret the essence of Southeast Asia. These designers were namely PMC (Malaysia), Sam Lo (Singapore), Headless (Vietnam), Lisa Mam and Peap Tarr (Cambodia), Mamablues (Thailand), and Don’t Blame The Kids (the Philippines).

In a statement to A+M, Rudy Khaw, AirAsia Group’s head of brand (pictured fifth from left), said the designers were chosen by AirAsia with assistance from PMC based on their different creative backgrounds, as well as their ability to express strong sense of purpose, positivity and community in their designs.

“There’s so much talent in the region and it was really deciding in the end with the PMC team what were the best kind of products and design styles to go with that would represent the region best. Most importantly, we wanted artists with different backgrounds, stories and dreams that could truly show how remarkable street art/culture is in this region,” Khaw explained.

The collection will be available at physical boutiques, on AirAsia’s e-marketplace, as well as selected Southeast Asia flights. While Khaw declined to reveal the exact ROI, he said it hopes to sell out the collection across all platforms. Besides championing Southeast Asian culture and people, Khaw said connecting with consumers in a new way was one of the other inspirations that brought AirAsia and PMC together.

Meanwhile, Hugh Koh, PMC CEO and co-founder (pictured fifth from right) said the tie-up is “extremely special” to PMC as it kickstarts the clothing brand’s 10th anniversary campaign that will be running all-year long. Titled “PMC 10 Strong”, the campaign will see PMC collaborating with 10 iconic and relevant brands, significant individuals and personas. The collection line established with Airasia marks its first collaboration.

A look at the newly-launched collection

The “Lucky Charm” luggage tag designed by Lo from Singapore features Southeast Asia’s culture of luck and superstitious, and encourages consumers to bring it along with them on their travels to ensure the universe works in their favour. The “Dream Big, Start Small” bum bag was designed by Don’t Blame The Kids from the Philippines, and shows elements of the Sampaguita flower which can be spotted in the Philippines. 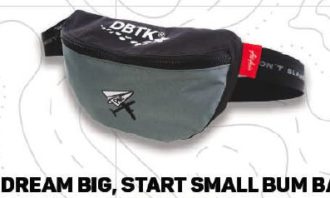 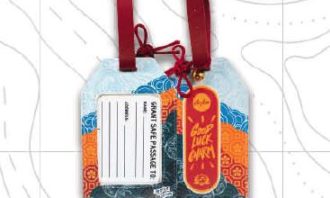 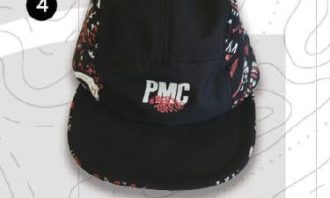 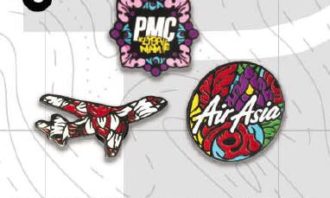 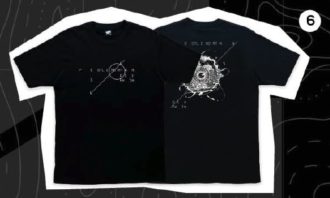 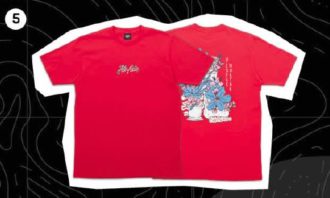 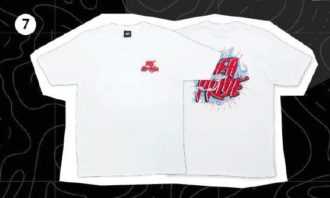 For the t-shirts, the “Flowers of S.E.A. Tee” designed by PMC from Malaysia sees each Southeast Asian country represented through their national flower placed in different pestle and mortars on a red t-shirt, a cooking tool famously used in Southeast Asia to crush and grind ingredients into a fine paste or powder. The “Eye of S.E.A. Tee” designed by Mamablues from Thailand features a black t-shirt that incorporated famous Southeast Asian elements into the shape of an eyeball to show that we see past our differences in culture and aspirations due to different beliefs, and live in harmony. The “S.E.A. Pride White Tee” designed by Headless from Vietnam shows waves that represent how the SEA countries are all surrounded by sea.

Cambodia is represented by two different products from Cambodian designers. The “Colours of S.E.A.” three-pin set designed by Mam contains both traditional and modern elements of Khmer patterns seen in carvings at the ancient temples of Angkor Wat. The patterns are a nod to the vibrant tropical colours, jungles and the flora that can be found within Southeast Asia as well. The second product- Naga five-panel cap- was designed by Tarr, and incorporates modern graffiti style with traditional Cambodian patterns in an abstract Cambodian “Naga” intertwined together. It also represents travelling and movement, showing the connectivity of the ASEAN region.

The partnership will help Taiwan Tourism to provide information on industry presence and guides on travelling to Taiwan...

Agoda has collaborated with vlogger, Nuseir Yassin, the owner of popular Facebook page ‘Nas Daily’, to release a promotional video..

The added remit comes shortly after the recent Citroen and DS wins in April, and its appointment by Kia Motors after a pitch in 20..