It seems like Adidas’ latest advertising stunt has turned a few heads – all for the wrong reasons.

The ad features football stars such as Lukas Podolski, Diego Costa, Arjen Robben along with others holding a real cow hearts in their hands to show their devotion to the game and their home ground.

The ad ran with the slogan: “During the World Cup, I will give my heart to the cause.”

However not everyone saw the passion in the ads, with animal rights groups crying foul over the stunt.

As reported on Yahoo News, a spokesman for Four Paws, a German animal rights group said: "He says he'd give his heart but it wasn't his heart was it? It was the heart of an innocent animal. If this was supposed to be some sort of PR stunt, then it misses the point." 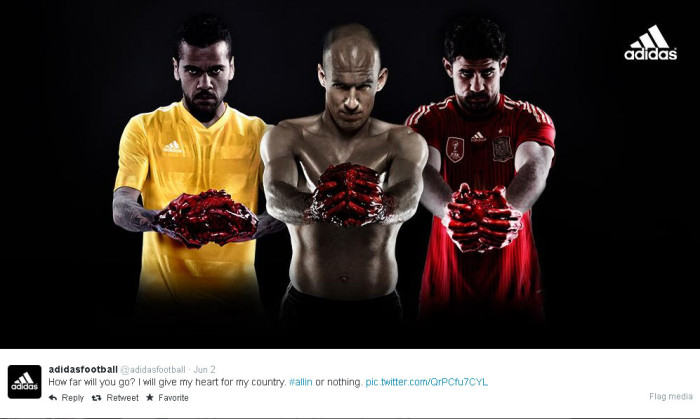 I will give my heart for my country. #allin or nothing pic.twitter.com/w46iyTKkOC

Football is passion. @Podolski10 will give his heart for his country at #WorldCup. #allin or nothing. pic.twitter.com/eg4Ncin3qW

Responses from the public have also been somewhat divided.

Here's what some fans have said so far:

Gross “@adidasfootball: How far will you go? I will give my heart for my country. #allin or nothing. pic.twitter.com/cCJy1VWJn9”