An adidas ad is gaining traction online after PAP MP for Tampines GRC, Baey Yam Keng posted a picture of it on his Facebook page.

Saw this billboard ad fronting a shop in Kallang Wave. There is quite a prominent motif of a hand gesture showing the...

While he did not explicitly voice his opinion on the matter, he posed a question which garnered responses from netizens who expressed concern over the ad.

Comments showed that some were not affected by the ad while parents seemed to be more vocal about the inappropriate nature of the ad. Still, netizens were divided on whether the ad was offensive enough to be removed. 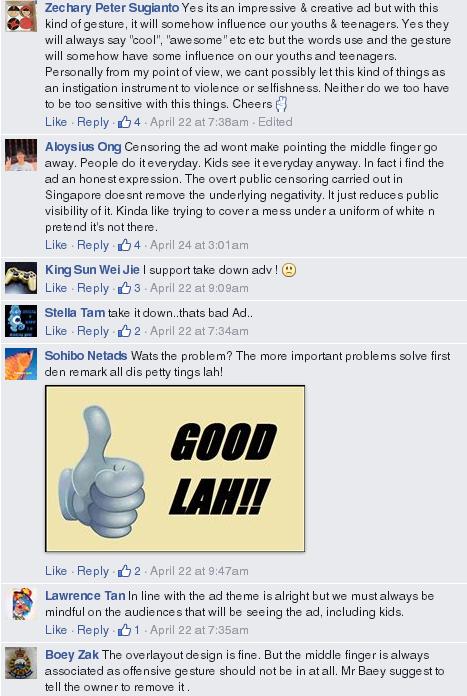 Adidas first launched the #ThereWillBeHaters campaign in January this year to coincide with the launch of adidas’ new football footwear range for 2015. The campaign is focused around a provocative new video featuring global football stars such as Luis Suarez, Gareth Bale, James Rodriguez and Karim Benzema.

The campaign also boldly proclaims that if you have ‘haters’, then it’s the ultimate compliment.

“The best players know that a great performance gathers ‘hate’ from fans and opponents, particularly on social media, which then continues to fuel their confidence to deliver even greater performances,” adidas had earlier said in a press statement.