A break down of global ad spend across mediums

The APAC region is forecasted to be the leading contributor to global ad spend growth in 2018, contributing 39.7%, US$8.1 billion of the total US$20.3 billion incremental global increase in 2018. This is led by markets China, Japan, India and the Philippines.

According to Dentsu Aegis Network’s latest ad spend report, the APAC is forecast to grow by 4.2% in 2018, however revised down from the positive 4.6% predicted in the June 2017 report with forecasts revised down in key market Australia. Digital remains the only growth certainty. It is forecasted to continue to expand at double digits in 2018, improving 12.6% to reach US$220.3 billion – a 38.3% share of total spend, surpassing Television spend for the first time at 35.5% share as previously predicted.

In 23 of the 59 markets analysed, digital is predicted to become the leading media type in 2018 with the inclusion of Russia for the first time. In the US, digital spend is projected to surpass TV spend a year later in 2019 with 36% of all spend.  Italy and Brazil remain TV focused markets in the foreseeable future, with over 50% share of spend still in TV in 2018. This is the case in 16 of the 59 markets analysed including in the Philippines, Indonesia and Egypt. 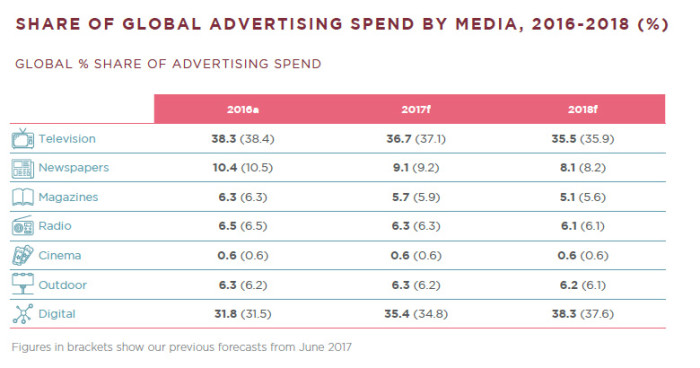 Within digital, paid search spend accounts for a significant 40% share of digital spend and is forecast to increase by 12.5% in 2018. With the arrival of voice search this growth trend is predicted to continue.  Display spend accounts for over 50% share, within this the format growing at the highest rate is video at 24.5% in 2018 driven by mobile – Video as consumers watch more and more video content on their portable, small screens.

This investment is not necessarily in in-stream/pre/post-roll VOD advertising – but also in out-stream, standalone Video advertising particularly placed and consumed with the mobile-social channels. The profile of digital spend is changing as it evolves, with engaging online video formats and social (+23.5% in 2018) growing rapidly whilst traditional display Banner formats grow at more subdued single digit rates, a predicted +8.7% in 2018.

Digital spending is becoming predominantly mobile spending rather than desktop, reflecting the shift in audience usage from desktop to smartphone.  Mobile ad spend overtook desktop in 2017 as previously predicted with a 57% share of total digital spend versus desktop at 43%.

Much of this increased investment in mobile will be passively purchased by advertisers (as digital ad impressions are automatically served and consumed by audiences on smartphones as opposed to on desktop).  A growing proportion will be actively planned and purchased as advertisers seek to reach and engage mobile audiences on the go. 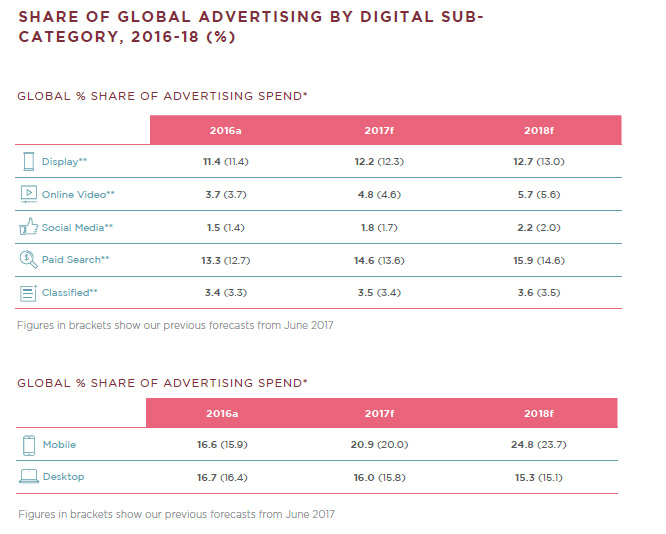 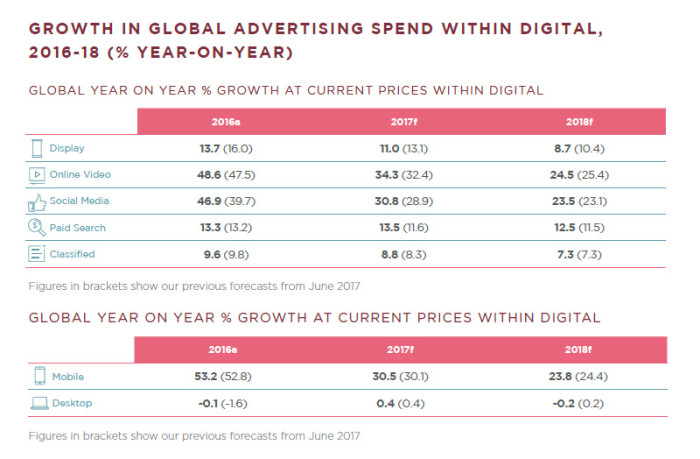 There will likely be an ever greater focus on data-driven ad targeting within digital – as advertisers (increasingly empowered by their recently developed in-house data management platforms, DMPs) apply their data to programmatic buying.

Programmatic spend increased by 26.2% in 2017 and is projected to increase by 23.0% in 2018.  Growing digital ad investment will be fuelled by a better understanding of ROI as marketers and the industry, develop better solutions for multi-touchpoint total attribution measurement.

History Channel's Mankind series is set for worldwide premiere year-end, with electronic brands such as LG and Sony, among others,..

Does your copy of the TODAY newspaper smell a lot like coffee?

Find out which brand was behind this delicious ad...

The campaign will run on digital platforms such as Facebook and Instagram, as well as cinema and OOH. ..

Brands have six months to abide by the ban...