Over the years, I’ve greatly admired how quickly, and in many cases how differently, the Chinese digital ecosystem has grown. So differently that we often feel we can’t learn much from China because the major global (social & messenger) platforms do not exist in China (yet). It is easy to default to viewing China as unique digital ecosystem unto its self and in most ways it is. However, e-commerce is one area we should pay strong attention to as a potential crystal ball of trends that could extend to the rest of APAC.

To understand the future of e-commerce we should look east, not west.

In 2015, China already overtook the USA to become the largest e-commerce market in the world based on value and is on track to be worth US$840 billion in 2021, almost double the estimated size of the US e-commerce sales in the same period (US$485 billion), demonstrating that the e-commerce growth rate in China exceeds the USA’s rate by about 4 times. This type of velocity makes China the market to watch and learn from when it comes to e-commerce trends.

Here are 8 trends to watch out for:

1) E-commerce is not a first-world phenomenon

In fact, it is the other way around in China.

According to McKinsey, the incredible e-commerce growth we are seeing in China is being driven by third and forth tier cities, and for the first time, these cities have surpassed first and second tier cities. The emerging trend to watch here is how rural markets in other parts of emerging Asia will also experience significant e-commerce growth. We already see this trend in India so expect to see this in other parts of the region as emerging middle class consumers with little or diminished access to physical retail outlets turn to e-commerce and their mobile phones to find the goods they want. 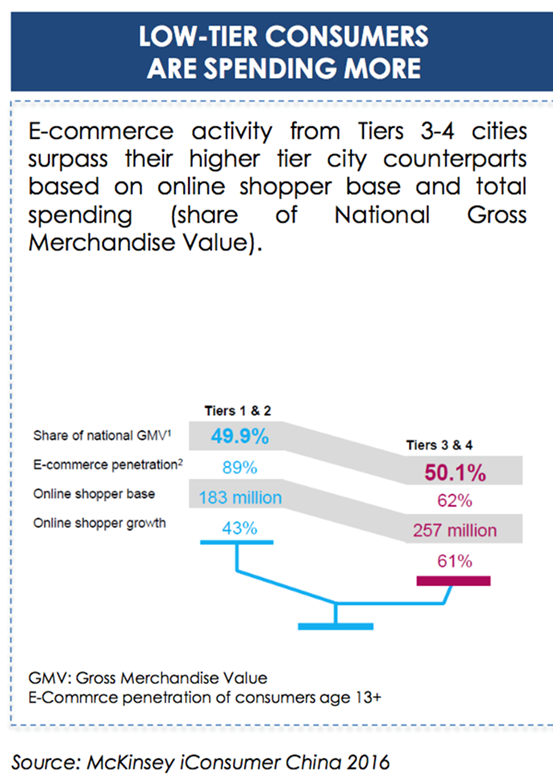 2) Social is the soul of e-commerce

Social commerce is central to commerce in China. The percentage of WeChat users who have shopped from the platform has doubled year over year from 15% to 31% in 2016. Social media has become a critical touch point for deciding what to buy online via product reviews and friends’ recommendations.

The trend to look out for here is not necessarily that social drives e-commerce, as we already know that approximately 50% of e-commerce is driven by social media in many parts of Asia. The future trend is the ability to purchase directly from social platforms such as Facebook Messenger. Expect to see a lot more bot & AI platforms pushing e-commerce but also brands turning to messenger platforms & IOT enabled speakers (Alexa) to offer better and more intuitive customer service. The trend to watch here is Social Customer Care.

Asia Pacific is set for an epic battle between Alibaba and Amazon, where both will invest billions of dollars over the next few years. Alibaba has already absorbed LAZADA and online grocer Redmart in Southeast Asia, while Amazon has its sights on expanding in Australia and Southeast Asia after already investing about US$5 billion in India. Expect to see further e-commerce consolidation and acquisitions in near future with the early winner being the consumer.

Also, look to see these e-titans take their fight into the world of advertising and specifically adtech as both of these players have even deeper and more relevant targeting data (purchase behaviour) than Facebook and Google. Alibaba took 40.3% of all the money brands spent on mobile advertising in China in 2016 compared to the 58% Google and Facebook combined took in the USA. Alibaba will be looking to take this fight outside of China as they continue to buy e-commerce assets around the globe.

According to a recent Kantar Retail study, Chinese consumers' primary motivation for shopping online has moved from "price, assortment and convenience" to "quality & value, service & experience and assortment". Chinese consumers are looking for a richer 'top-of-the-funnel experience, and this user experience trend will definitely flow out of China. Consumers in APAC are already de-prioritising price in favour of online experiences that mimic their richer and often more enjoyable offline shopping experiences. 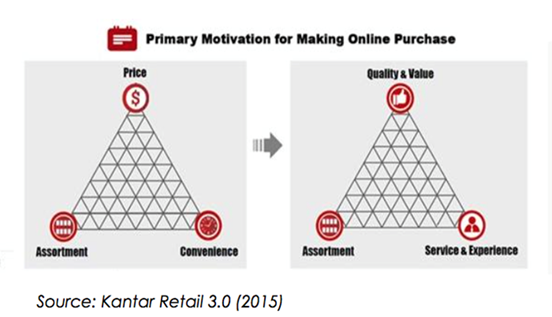 Chinese shoppers do the majority of the e-commerce shopping on a single site where they can compare millions of products across many categories. While this is not that different to Amazon it is more transparent and detailed, allowing levels of personalisation and customisation that Amazon does not do today. The other key difference is that ultimate seller brand (ie. Amazon) is not as critical to the purchase decision so the notion of the seller’s “brand” plays a lesser role in favour of a platform that provides convenience and choice.

2016 forecasts have mobile commerce at approximately two-thirds of desktop sales but looking only at the Alibaba’s 2016 Singles Day, an amazing 82% of sales were on mobile devices, which could mean this pace is accelerating even faster than forecast.

The undeniable trend is that mobile commerce will continue to grow inside and outside of China and eventually be the primary way consumers purchase online in most of APAC. 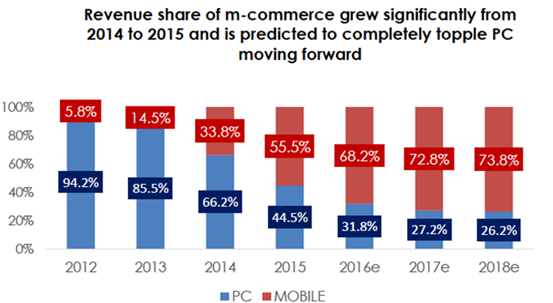 China’s innovation within eCommerce will set the standard for markets outside of China.

First up, in terms of payment security features. Alibaba’s "Pay with Your Face" allows you to authenticate payments with a selfie, or the more recent sneak peek of the BUY+ virtual store which Alibaba showcased during Singles Day. Buy+ allowed shoppers to transport themselves to NYC and virtually walk the aisles of the famous Macy’s department store to purchase select items.

Due to the massive scale of China’s ecommerce market we will definitely see e-commerce innovation come out China that could set APAC or even global standards.

8) The future is frictionless payments

The convenience of services like Alipay or WeChat Pay make it extremely easy for Chinese shoppers to purchase. These mobile payment systems are accepted online and offline and highly integrated into consumers' lives making them the go-to payment of choice. Nearly half a billion businesses within China use Alipay and consumers are now even using it overseas when they travel.

Look for Alibaba to continue their aggressive global expansion of Alipay as they invest and acquire financial assets outside of China on the path to global domination. It won’t be too long before you will be paying with Alipay instead of your Mastercard.

In summary, e-commerce is advancing faster than we can imagine, with much of the innovation being led by developments in China. The massive scale of the market there, as well as being the home to one of the world's biggest e-commerce players, it's only natural for the ecosystem to have developed at a much faster pace than the rest of the world. At Publicis Commerce we believe you need to look east as well as west to understand how e-commerce will evolve in APAC and China is the market to watch.