Ever thought of switching banks due to a poor customer experience (CX)? Well, you are not alone.

This is based on findings from a recent study by Genesys, and Frost & Sullivan, which found 40% of Singapore banking customers stopping or cancelling their services with a bank due to poor CX. The study saw one in three respondents citing “having to repeat information” as the key reason which caused them to cancel their existing relationship with their bank.

The study also found that banks which scored higher in the “ability to maintain context” had higher levels of customer loyalty. Meanwhile, the lack of ability to remember a customer’s previous interaction and carry out seamless handovers led to increasing frustration among customers, who find the need to repeat their query numerous times.

First contact resolution is also ranked among the top three determinants of customer satisfaction. That being said, over 46% of respondents were found to have contacted the bank at least twice to resolve a single issue, while over 43% of respondents needed to use more than one channel or contact method to get the same issue resolved.

Foreign banks were also found to be outperforming local banks in customer services. Respondents across the six banks expressed similar mean scores for CX, and likelihood to purchase additional services. However, customer loyalty scores varied among the respective banks. 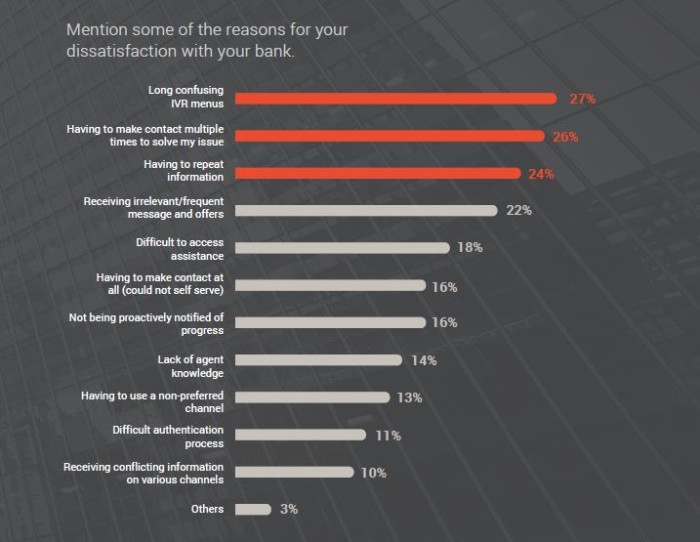 Not enough being done for omnichannel experience

Over 90% of Singapore bank customers surveyed also do not go for live assistance or face-to-face engagement first unless they require more information than what is already provided on the bank’s website and email communications. That being said, only 10% believe their banks provide omnichannel support with the ability to track their interactions, purchase history and preferences across multiple channels.

One out of four customers surveyed purchased banking services via email, phone, mobile app or a combination of all three. This shows growing maturity in the “click” adoption and trust in signing up for services online, Frost & Sullivan said. The study also found that going online is typically the first step customers take when resolving issues during the post-purchase phase. Email and mobile apps are also important channels for issue resolution.

Singaporean banking customers firmly believe that contact via phone is essential, followed by email. Among newer channels such as messaging apps, chat, social media, video, messaging apps are viewed as the most preferred for future communication.

Typically, customers prefer these new channels due to greater familiarity. However, awareness of the availability of non-traditional channels seems much lower than the adoption of such platforms for consumer communication. The study found only less than 25% of customers surveyed being aware of their banks’ social media, chat, or messaging apps for services offering.

The ability to successfully resolve an issue plays a considerable role in channel preference. Most respondents in Singapore chose the contact centre (phone) as the most effective channel for issue resolution followed by a visit to the branch even if they can access digital channels such as chat, messaging, and social media. 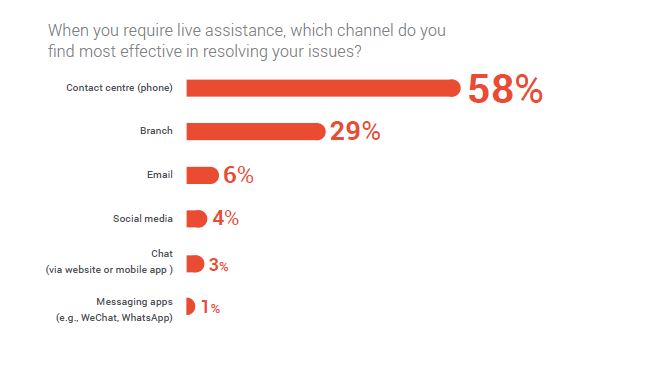 “Banks in Singapore are increasingly demonstrating efforts to engage with customers more meaningfully and portray themselves to be more customer-centric. While banks are adopting various digital channels to make services available at customer’s convenience, more needs to be done to align these touchpoints with the rapidly changing customer expectations,” Baidya added.

The study saw Frost & Sullivan conducting an online survey of 500 customers across six leading banks in Singapore in the second quarter of 2017. Key areas of focus include perception and attitudes among customers regarding banks’ CX and interactions that customers have with their banks over their entire engagement lifecycle, to name a few.

#PRAwards 2021 highlight: How NVPC shines the light on Singaporeans' generosity amidst pandemic

Phygital: Bridging the gap between digital and physical world