This morning the ongoing ballot counting for the Hong Kong Legislative Council elections is making headlines and media coverage at different news outlets.

As the first major election since the pro-democracy protests in 2014, the result of the election is, without a doubt, the news story of high value.

Yet its news value does not necessarily make the story a money spinner, said Michael Logan.

Currently working as the content development director at Taiwan’s Next Animation Studio, a Next Media-owned firm that produces animated versions of news stories for clients including Reuters, Logan said at a conference in Singapore last week "there is a need for one in every two news stories to be more popular than newsworthy to fund the company’s news gathering machine."

"We’ll be covering the Hong Kong elections. It’s not a big money getter, but it’s an important story for us," he said.

And I will get the shark stories and the waterslide stories to pay for it.

“For me now, shark stories and waterslide stories are really big. If I can do enough of those, I can do the other important stories,” he said. 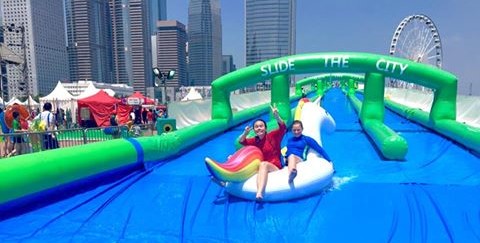 Noting that his company’s business model is built around generating large audiences and selling them to advertisers, the former South China Morning Post and Taipei Times production and multimedia editor estimated that the split between “popular” stories and “important” stories is 50:50.

He also discussed the "tyranny of the algorithm" and how Facebook and Google have reshaped what stories get told.

Logan explained his company chooses to be “purposefully comedic” in its treatment of stories, and that comedy brings out a valuable truth in news reporting.

"We are purposefully comedic – there are journalist truths that we can tell in that format. I worked for three newspapers before Next Animation. One thing I noticed was editors around me were always making fun on the news. They’d write a funny version of a headline before writing the final, serious headline. But there was a lot of truth in that funny headline."

"All the editors I’ve worked with I’ve either hired from broadcast or print, and there was always the instinct to make fun of what’s happening, and there was a lot of truth in that," he said.

The serious broadcast doesn’t allow them to do that, and they come to Next and all of a sudden they can be funny. But it’s a different truth from what you’re used to getting from TV or print journalism.