In January this year, football fans were busy taking to social media about the interview Seattle Seahawks player Richard Sherman had with Fox reporter Erin Andrews. Following the victory of the game played between Seattle Seahawks team and San Francisco 49ers, Andrews asked Sherman to describe the last leg of the game.

The response from the athlete was as follows:

“I’m the best corner in the game,” he screamed into the camera. “When you try me with a sorry receiver like Crabtree (a player from the opposing team), that’s the result you’re gonna get. Don’t you ever talk about me.”

In case you missed it, there’s a clip above and here are some pictures of Sherman on stage: 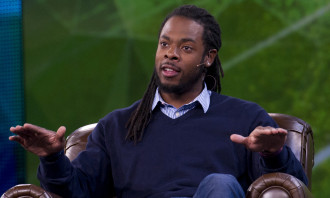 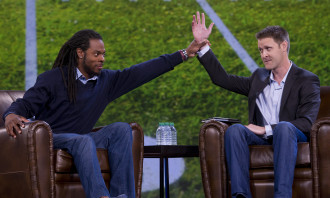 Days following the interview, Sherman saw a spike in his Twitter fans and engagement as his interview continued being plastered over the internet. While many might have thought Sherman’s brash and unexpected response was part of his personality, Sherman said that it was a calculated publicity move.

At the Adobe Summit 2014, Sherman defended the move as planned risk, revealing that he had been miked up throughout the game. Not once during the match did he curse or swear or behave in an impolite manner, making it fairly clear he was in control of his actions, said Sherman.

“I was the guy under the radar and Seattle Seahawks is usually ignored […] Players give cookie cutter responses and to make a mark you’ve got to get real,” Sherman said explaining that the cliched response is usually:  It was a great game, they were great opponents and this is a great respect”.

“I knew I had to take a different path than those before me,” said Sherman.

With a background in advanced marketing, the Stanford graduate added that for such calculated risks, you always need to have a plan put in place. “You have to have the foresight to see and plan and you want to provoke a response. And if honesty and genuine words sells outside the field, I’ll do that. I will take the criticism and spike that comes with that and then embrace the celebratory position and create longevity,” he said.

After the incident, he went into full “recovery mode”. Sherman apologised across all mediums and platforms to the reporter . He became a global name, instantaneously gaining popularity amongst even non-sports fan.

According to Sherman, to create a brand name for himself and step out of the shadows there was a need to provoke. And after the provocation, there is a need to “live inside the moment and take risks” and “weather the storm and overcome adversity.”

“Have the foresight and plan using the tools you have been given. If you really believe in it you have to stay consistent because it will not always be sunshine and a bed of roses. But after the storm, there might just be another bed of roses.”

Of the same opinion was actor, director, producer and international artist Robert Redford, who was the closing act of the second day of the keynote summit.

“Not taking a risk is the risk. Taking risks is what propels you forward,” Redford said.  The only constant in life is change and everyone has to use the change to create something new was his advice to marketers.

Much like the film industry, the marketing and advertising sphere today is also clouded with awards and recognition and success. According to Redford, while success is tempting, failure that comes with taking risks has its fruits of labour.

” You can’t get too connected and embrace success too tightly. You acknowledge and be thankful for it but it has a dark side. People can get so consumed with success they can get stuck. Failure propels you forward […] You can either move through it and realise it is a step along the road or get stopped in your track.”

Marketing, he said, is a key word as it is story telling about who you are and what your brand is.

“Marketing for me is storytelling,” he said. This echoed what was said by Adobe’s CEO Shantanu Narayen during yesterday’s key note speech where he described marketing as a collaboration of art and science.

“It is chaos followed by order. Art is chaos and business is the order. But order has to follow chaos. It can’t come first,” said Redford.

While technology has enormous value as it can calculate many ways of seeing something. Creativity is ultimately what brings it to life.

Read also: 4 ways marketers need to reinvent themselves in the digital age

He was the Southeast Asia CEO for Havas Creative Group between 2014 to 2017 before the creative and media divisions consolidated...

Using the Bola Raya app, consumers can scan an image of themselves and tap to change their AR jersey...

"It's about connecting with customers in a humanised manner, and adapting the customer experience to the specific needs of the ind..

Carl Fremont aims to build a digital leadership team across globe to grow and drive the agency's digital business...