Shopee has come out on top as the most visited eCommerce platform in Southeast Asia, beating Lazada (#2) and Tokopedia (#3) with a total average of 184.4 million visits on desktop and mobile web in the first quarter of 2019 (Q1 2019).

According to a recent study by iPrice Group and App Annie, Shopee experienced a 5% increase in its overall average total visits, primarily boosted by the increased visits in Indonesia and Thailand. This is evident that Shopee was able to maintain its growth momentum from the previous quarter although Q1 2019 was considered a non-peak period, iPrice said.

Meanwhile, Lazada witnessed a 12% decline in total average visits when compared to the previous quarter, obtaining 179.7 million visitors for Q1 2019. IPrice attributed the decline to the differences in marketing initiatives between the two quarters, such as the Lunar New Year and Lazada Birthday sales in Q1 2019 and the 11.11 and Black Friday sales in Q4 2018, for example. Despite this trend, the study noted that Lazada remains the most visited eCommerce platform in Malaysia, Singapore, the Philippines and Thailand.

Meanwhile, Tokopedia, Bukalapak (#4) and Vietnam’s Tiki (#5) were among the top five most visited eCommerce platforms in Southeast Asia despite only being available in a single market.

Besides Indonesia and Vietnam, other locally based eCommerce platforms that performed well were Lelong which ranked third in Malaysia; Argomall which ranked fourth in the Philippines; Qoo10 which ranked first in Singapore; and Chilindo which came in third in Thailand. 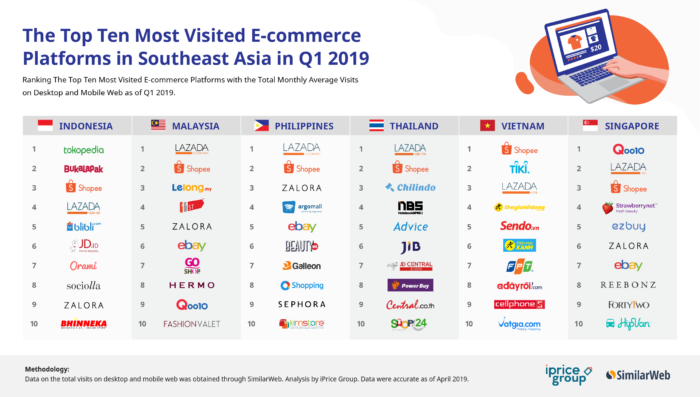 On the mobile app front, Lazada was the top choice for consumers in Malaysia, Singapore, the Philippines and Thailand, while Tokopedia and Shopee was the most popular app among those in Indonesia and Vietnam respectively. For Malaysia in particular, the other popular mobile shopping apps were Shopee, Taobao, 11street and AliExpress. Meanwhile in Singapore, Qoo10 Singapore, Shopee, Taobao and ezbuy were the top five most popular eCommerce shopping apps. 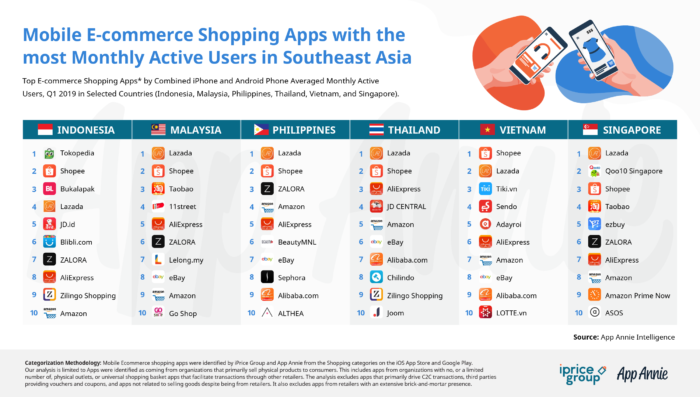 According to iPrice, data on the total visits on desktop and mobile web in this study were taken from global traffic figures from the respective websites as of April 2019 from SimilarWeb. The following industries were not included in this list: e-ticketing, financial services, rental services, insurance, delivery service, food & beverage, meta-search, couponing, cashback websites and eCommerce which solely provide classified ads/P2P services.

Meanwhile, App Annie Intelligence for iPhone and Android phone were derived from mobile usage data collected from a large sample of real-world users, combined with additional proprietary data sets. For the purposes of the report, an active user is defined as a device having one or more sessions with an app in the time period. A single person may be active on multiple devices in any time period and will therefore be counted as one user per device in the total active users.

Sunway's branding exercise through reality series to be streamed on iflix

The Sharing Fridge scheme wanted to help the underprivileged in Shanghai, but all did not go according to plan...

Here are some Christmas campaigns that warmed consumers' hearts and tugged at their heartstrings...

Mothers and creative leads speak up on the "Mum and Maids" campaign. ..

The campaign will be heavily digital, with a strong presence on social media platforms and online channels...