Marketing and PR have often been functions that struggled to get buy-in and understanding from senior executives. For PR in particular, while many have not understood the importance of the function, there are still pockets of individuals who struggle to see its value.

In a conversation with Marketing, Tan May Lee, partner and executive director, Perspective Strategies added that generally, there is still a low understanding of the functions and value of PR outside the realm of marketing practitioners.

One of the reasons stems from its intangible value derived, unlike marketing functions which has a clear ROI as KPI.

"But I believe as business drivers of any organisation, all functions especially communications. and PR has to be well understood, as per in financial term, the sum-of-parts valuation. Though PR may bring an indirect, tangible value to a company brand, it contributes directly to brand building and brand equity," she explained.

That said, the PR industry, according to Golin's MD of Singapore and Southeast Asia, Tarun Deo, is undergoing "a reinvention of sorts".

"In the context of today’s environment and the internet, clearly traditional public relations (largely media relations) has a role to play but it’s not as effective as it once was on a stand-alone basis. In general, I don’t believe in today’s always on environment, brands and companies are going to be able to stay relevant without progressive public relations being at the center of the conversations with their stakeholders," he said. He added that it is crucial for senior managers within organisations to take the time to understand and double down what progressive PR can deliver for them.

"There is much happening in progressive public relations today to push the needle on a whole host of challenges that companies face – reputation, brand relevance, lead generation, driving sales and business results, adopting social cause and the like. So if senior managers have a 'Don't know, don't care' approach – then they really are hobbling their ability to compete or survive and thrive in the marketplace," Deo added.

Edelman Malaysia's MD Mazuin Zin told Marketing that communicating the importance of PR, at the end of the day, boils down to a collaborative mindset between clients and agency partners. As the role of PR evolves from amplification to one built on earning trust, attention and advocacy, collaborative efforts will be more in demand in  breaking down barriers.

Her experience has been a pleasant one, coming initially from the creative industry. She said, "In our experience, the senior teams on the client side are quite well-versed [with PR] and are able to articulate the role they expect their PR teams to play in the overall business-brand strategy."

By and large the agency is encouraged to go beyond business-as-usual public relations and push the envelope on building an earned-centric approach. As 2019, comes to an end, we took a look back at some of the interesting PR stories that got our readers glued to the site: 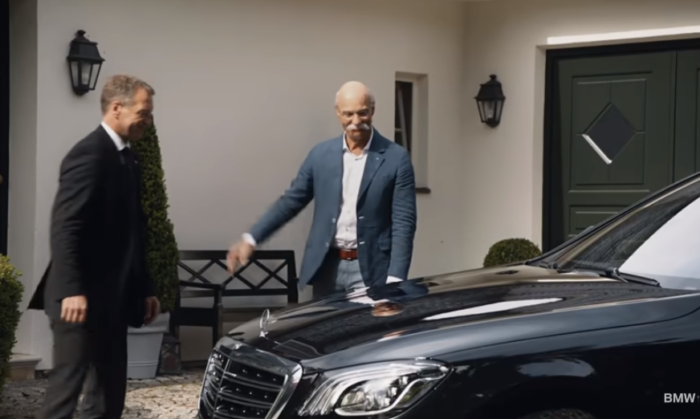 BMW caused a stir among netizens with a spot titled “Retirement is about exploring your wide open future”, dedicated to Mercedes-Benz’s former CEO Dieter Zetsche who retired in May this year. The spot featured a lookalike of Zetsche bidding farewell to his fellow colleagues and is chauffeured home in a Mercedes-Benz car. Upon reaching home and thanking the chauffeur for the ride, Zetsche is seen racing off in a BMW’s latest i8 Roadster model from the garage.

Commenting on the ad, Carro Singapore chief marketing officer Manisha Seewal told Marketing that the spot resonates with consumers no matter which part of the world consumers come from. "You can resonate with the brand’s emotion that resonates with freedom, being free. BMW is a driver’s car, it’s not really a passenger’s car. The brand’s emotion is given off in a very powerful way," she said. 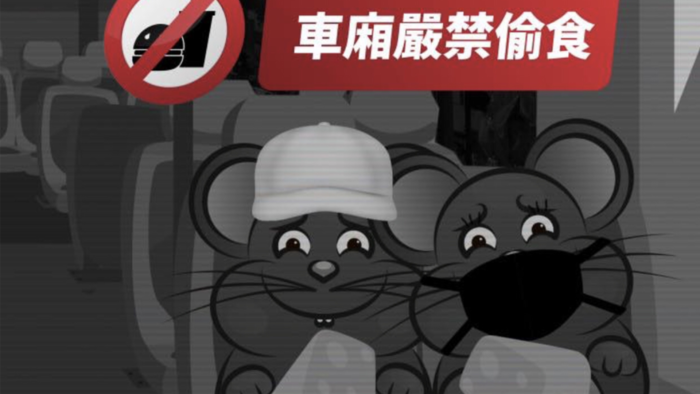 While the pair encountered backlash from netizens and fans, brands in Hong Kong including Pricerite, KMB, HK Express, Hong Kong Buildings Department, and Kraft Heinz Hong Kong did not hesitate to take full advantage of the situation. They took jabs at Hui and went all out with the puns. 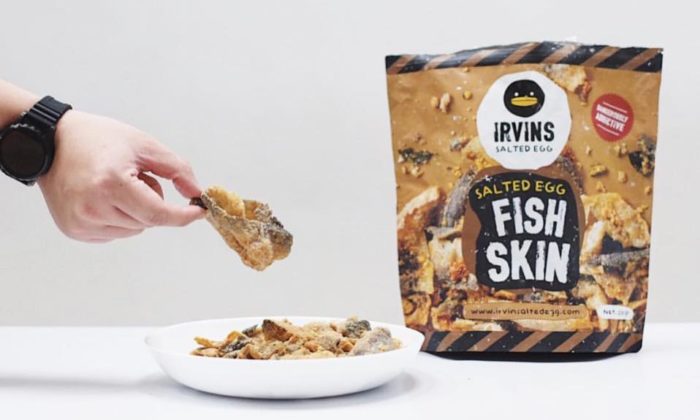 Singapore-based food company IRVINS Salted Egg captured the hearts of consumers with its heartfelt apology, after a customer reported that she found a dead lizard in her packet of chips. The brand swiftly responded with a sincere apology on Facebook, highlighting that it will provide refunds to those impacted.  Founder Irvin Gunawan added that the team was “shocked and devastated” at the situation, adding that it was a “major blow” to the team. Despite not having much more to explain on how this mishap occurred, several netizens praised the brand and its PR team on the statement saying this was “PR crisis management at its best”.

Carolyn Camoens, managing director of Asia, Hume Brophy said that Irvin’s was successful in getting people on its side because its apology was authentic. “No excuses. No attempt to sidestep responsibility for what happened. The brand straight up said sorry and consumers forgave the company,” she said. “Audiences today have become desensitised to canned, corporate spin. They can spot spiel a mile away and tend to mistrust overly engineered statements. Irvin’s apology was simple and sincere. And that’s what made it effective.” 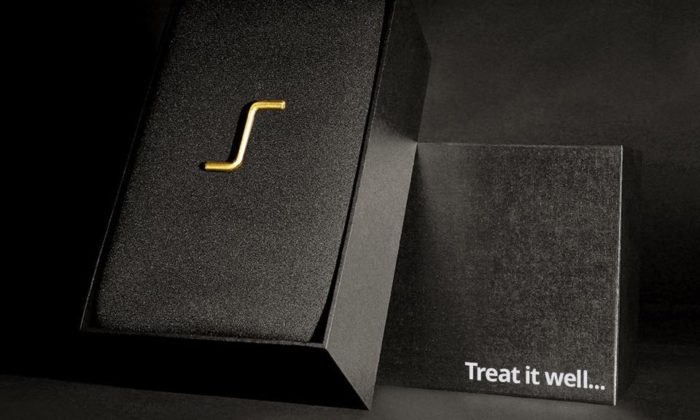 BBH is often known for its classy content and its quirky posts that it co created with IKEA. One such stunt came following the appointment of TBWA\\Singapore for IKEA Southeast Asia's creative account.

Incumbent BBH Singapore decided to publish a Facebook post bidding farewell to its long-time client. Against a backdrop of black boxes and an iconic do-it-yourself allen key from IKEA, the creative reads simply: “Treat it well”. The allen key and a note were also hand-delivered to TBWA\\Singapore’s office. The post garnered over 120 reactions and 20 shares in less than an hour, with several commentators applauding BBH Singapore for the “classy” move. 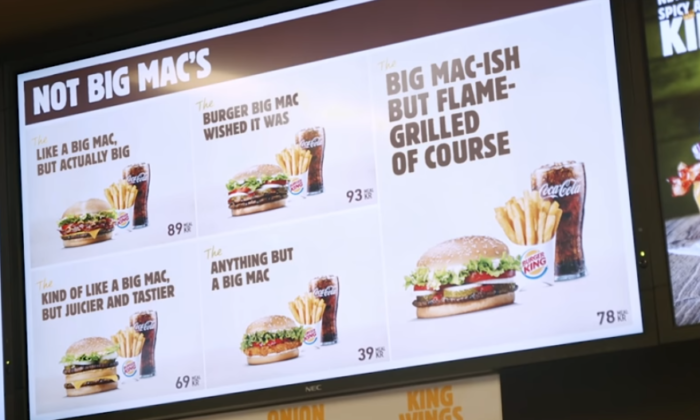 Burger King is known for the hilarious swipes it often takes at its competitor McD's. One such jab came when Burger King Sweden mocked McDonald’s after it lost the “Big Mac” trademark it filed for in the European Trademark Court.

The former surprised consumers with a new menu called “Not Big Macs” for a limited period of time, containing product names that were inspired by feedback regarding McDonald’s Big Mac. Among the list of products included “Big Mac-ish but flame-grilled of course”, “Like a Big Mac but actually big”, “The burger Big Mac wished it was”, “Kind of like a Big Mac but juicier and tastier” and “Anything but a Bic Mac”.

But not all of its jabs have been successful. The king of the grill copped flak from netizens for “capitalising off” of mental health awareness month in May 2019, and using this opportunity to take a dig at McDonald’s at the same time. This came days after Burger King unveiled its #FeelYourWay campaign in partnership with Mental Health America. The campaign is accompanied by an ad which ends with, “No one is happy all the time. And that’s OK” while rolling out a menu of Blue Meal, Yaaas Meal, Pissed Meal, Salty Meal, and DGAF Meal.

(Read also: The King of burn: 5 times Burger King out grilled its competitors) 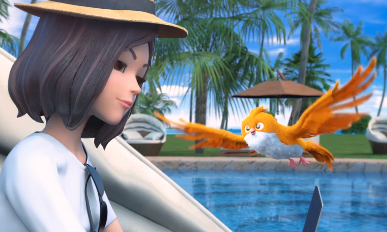 In May this year, KrisFlyer reached out to Facebook fans to participate in a naming contest for its new mascot. Participants were required to submit a creative name for the KrisFlyer mascot and a brief explanation for the choice of the creative name. The winners of the contest will be named on the SIA Facebook page, and rewarded to 30,000 KrisFlyer miles.

Singapore Airlines' spokesperson told Marketing previously that the engagement campaign aims to drive awareness of the KrisFlyer programme and its benefits.

7. Scoot turns the colour yellow into a currency 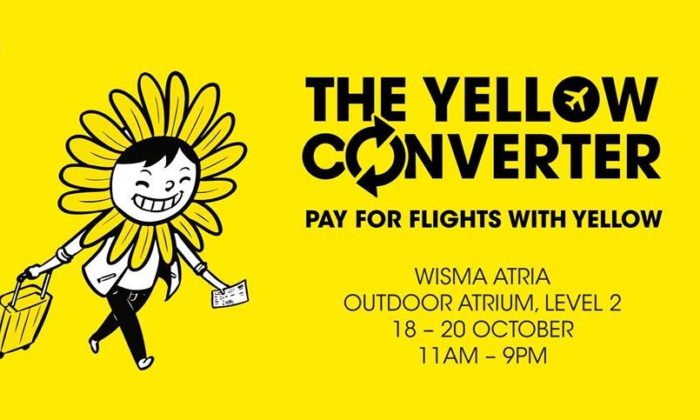 Yellow is not just another hue that makes up the rainbow. In October, Scoot launched The Yellow Converter event and rallied customers to #GoYellow to get flight discounts. Consumers were encouraged to bring as much yellow to the event to get more discounts. Items can include things that are worn, quirky, surprising, travel-related, have a large surface area of yellow or has a yellow shade close to Scoot’s. In conjunction with the campaign, Scoot has also launched a contest on Facebook to recruit volunteers for a research study to better understand travellers who seek out a life less ordinary.

Scoot's VP of marketing, Jacqueline Loh, told Marketing then that Scoot strives to challenge the status quo in everything it does, much like its bold brand colour yellow. Loh added that the activation was a way to bring to life its campaign ‘’Go Yellow, Escape the Ordinary!’’ campaign.

The move came after Scoot's rather tough year filled with delays, emergency landings and a false bomb threat situation.  Acknowledging its service delays and disruptions dating back to as early as November 2018, Scoot’s CEO Lee Lik Hsinfirmed  said the airline is “not perfect” and there is “always work to be done”. In an interview with CNA, Lee revealed that the major flight disruptions have taken a toll at the airline’s on-time performance (OTP) metric, which refers to the level of success of the particular service remaining on published schedule. According to Lee, utilisation rate for its fleet of flights had to be reduced to improve overall OTP. 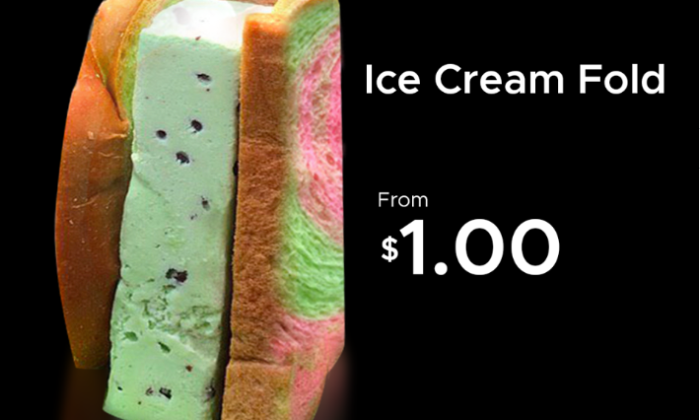 The Singapore Tourism Board (STB) created a lot of laughter with its poke at Samsung’s new foldable smartphone, Galaxy Fold. The Facebook post featured an ice cream wrapped with bread, calling it the “Ice Cream Fold”. The post read, “Taste good no matter how you fold it.

Behold #VisitSingapore’s ice cream sandwich. #GalaxyFold”. Terrence Voon, director of digital and content over at STB, told Marketing that its key marketing strategy is connecting with fans, through storytelling. To do that on social media, the team needs to be agile and creative, he explained.

He added that this post was enabled by its Destination Newsroom, a social media command centre which helps STB mine the latest trends and conversations for real-time insights and content ideas. 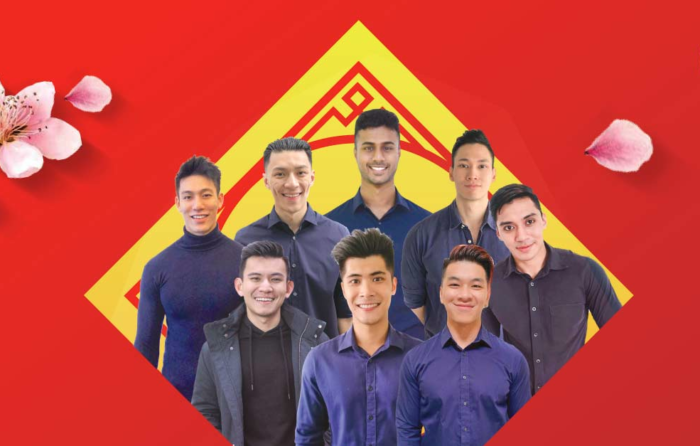 This Lunar New Year, Lazada Malaysia came to the rescue of females who had to fend of nosy aunties meddling with their love lives, with the campaign "Slash" the Leng Chai (handsome boy). Shoppers who won a date with an eligible bachelor had the opportunity to spend an afternoon with their "boyfriend" at a reunion luncheon at a nursing home with senior citizens. The campaign hoped to highlight the importance of being with family and counting one's blessings.

Lazada's former CMO Andrew Gnananantham said its focus has been to create disruptive events to get people’s attention and get them to share their Lazada experience with their friends and families. As such, the team thought of using "Slash It", a social shopping feature that brings people together by getting others involved to help each other ‘"slash" prices off items to get the best deals. 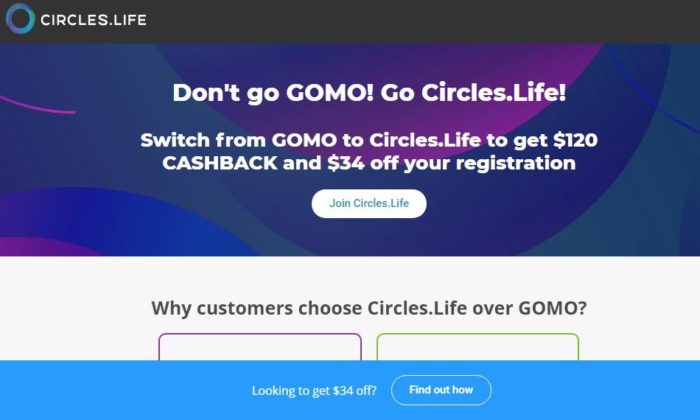 Circles.Life, known for its cheeky nature, created an entire microsite stating “Don’t go GOMO! Go Circles.Life!”. According to the website, users who switch from Singtel’s GOMO plan to Circles.Life would be entitled to SG$120 cashback and SG$34 off registration.  This website has emerged weeks after Singtel launched an all-digital mobile product GOMO (Get Out More Often) to appeal to digital natives and Millennials. Similar to Circles.Life, GOMO offers a no-contract plan allowing customers to link their debit or credit card for monthly payments and purchases. Other offerings include digital mobile sign-up, same day SIM card delivery, a Care app and 24/7 live chat for customer service enquiries, as well as data allowances and lifestyle benefits.