AirAsia group CEO Tony Fernandes (pictured) has copped flak for openly showing his support for politics on a professional level. An article on the New Straits Times quoted Fernandes saying in a video that the company “owes its success to the government” led by the former PM Najib Razak. He also urged Malaysians to vote based on facts and that “AirAsia is a fact”.

Since then, some netizens have called for the boycott of AirAsia, calling Fernandes a “disappointment” and “disgrace” for supporting a the former PM’s party. Others said he “bet on the wrong horse”.

In the lead up to the 14th Malaysian General Election (GE14), former Prime Minister Datuk Seri Najib Razak was spotted to be returning to Kuala Lumpur in an AirAsia aircraft sporting the livery “Hebatkan Negaraku” (Make My Country Greater), which also happened to be the theme of Barisan Nasional’s (BN) election manifesto, according to multiple media reports. Media reports on Business Insider also stated that AirAsia crew members ditched their usual red uniforms and donned blue ones instead.

This led to competitor brand FireFly, under MAB, taking a jab at AirAsia with a social media post saying “I’m still wearing orange. No matter which colour you choose, we bring you home.” The post also added that it is neutral, featuring four X’s in the colours blue, light blue, red and green, representing the colours of the political parties that competed in GE14, said Coconuts, the publication which spotted the post. A+M has reached out to FireFly to confirm contents of the post.

Providing exclusive data to A+M, Digimind Social, which analysed social media sentiments from 7 to 11 May 2018, found that Malaysians showed a fixation on Fernandes’ support for BN during this period. Several netizens expressed “unsupportive views” of his endorsement of BN and former PM Najib and phrases such as “bang Jib” (brother Najib) were used when referencing the AirAsia aircraft decorated with BN-themed livery. 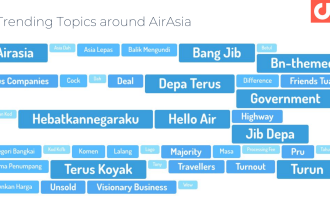 Topics around the brand 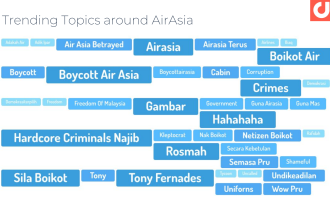 Topics around boycotting the brand 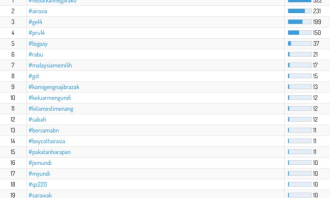 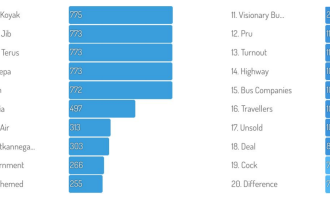 Besides voicing their outrage over Fernandes’ support for BN, online conversations also revolved around consumer experience taking a hit due to the sudden influx of Malaysians flying home to vote. This led to AirAsia-related discussions on social media in Malaysia peaking at 2005 mentions on 8 May, according to Digimind’s data. However, discussions around the topic tapered off after 8 May, most likely due to netizens shifting their attention from AirAsia to polling day.

While explicit calls to boycott AirAsia in light of Fernandes’ support of BN accounted for less than 10% of AirAsia-related chatter on social media, Digimind added that these discussions formed part of a larger conversation trend surrounding GE14. Netizens used harsh words such as “hardcore criminal” to describe former PM Najib, and expressed wishes for Airasia to “close shop” for their “betrayal” of Malaysians.

Digimind said that as a result of Fernades’ personal endorsement, “netizens associated AirAsia with supporting a corrupted party which could hurt the airline’s perception among locals in the immediate run.”

A+M has reached out to AirAsia for comments regarding consumer sentiments.

Should CEOs openly take on a political slant?

In a statement to A+M, Lars Voedisch, principal consultant and MD of PRecious Communications, said Fernandes built his personal brand by having and sharing an opinion. By default, this will lead to situations where people disagree with them, while some might appreciate that he is not playing it safe like most CEOs. However, Voedisch described politics to be an “emotionally charged” matter, which may result in Fernandes facing some heat for his actions.

He added that the role of CEOs and brands are evolving, with CEOs being increasingly expected to have an opinion, which will naturally cover politics.  Voedisch added that instead of showing support for a particular party, CEOs should instead emphasise on the political issues they support – which may or may not relate back to a particular party.

Fairil Yeo, managing director, Singapore and head of digital, Asia Pacific, LEWIS, said by taking a stance, Fernandes is inviting attention and sentiment – be it positive or negative.

“CEOs and brands are often seen as one, and there could be adverse impact on the brand’s reputation despite the intent of the comment made [by the CEO],” Yeo said. Even so, consumers still question what a brand stands for, regardless of the topic, due to this “age of radical transparency”.

“Openly engaging in the support for political parties is always a risky position to occupy, but it does give CEOs the opportunity to represent themselves in what they believe in,” Yeo added.

Also weighing in on the conversation is Tarun Deo, managing director of Singapore and Southeast Asia, who said that historically, business prudence dictated that companies do not take sides, at least in public around political support. But the reality in today’s polarised environment is that companies and their CEOs are increasingly being drawn into these discussions.

“So they need to be prepared to have these discussions, at times in the public domain and are expected to present their point of view by various stakeholders,” Deo said.

B2B agencies: Don’t be seen as just a supplier

Nearly 60% of B2B deals are lost even before a proposal is made, said GM of Sharp Ajit Aras. ..

Each year Marketing magazine undertakes one of its most significant research projects to discover the media preferences of Hong Ko..

The agency has been appointed to handle its marketing communications after a three-way pitch. ..