‘Today’s consumers different from the generations before.’ Are they really?

Over and over again, we’ve heard that consumers today have changed. We have heard about their busy lifestyles and that they are completely different from their predecessors.

But is all of that really true? During a panel discussion at Salesforce Connections, Bobby Stephans, digital leader, retail and CPG of Deloitte Digital shared that Deloitte took on a year-long study to truly understand the modern consumer and findings debunked many conventional wisdoms about the new-age consumer. For one, the consumer isn’t actually busier with work because today there is a larger number of individuals entering the workforce.

Another change impacting companies today is this notion of deferred life stages. For example, delayed age of buying a car means delayed buying of gas. Delayed age of marriage means delayed building of families or property purchases. All these indicate that the modern day consumer has not fundamentally changed, but is rather shaped by the environment and economy around them, explained Stephans.

Sharing his views on a the matter was Praveen Moturu, chief enterprise architect of Mars, who echoed the same sentiments saying: “While the choices made by consumers might be changing, the consumer fundamentally has not. It’s not about the shifting consumer it’s about the choices.”

For example, email today is no longer the ideal mode of communications, but rather app notification or messaging on mobile. This doesn’t mean the consumer isn’t keen to receive messages, but rather the convenience mode has changed. Same is true for spend, Moturu explained:

To resonate with consumers, marketers need to have a direct relationship with them and intelligent collaborations, Moturu added. But the relationship now influences product creation in a different manner, he explained. In the past, companies would rely on R&D teams to create products for consumers. But today, more and more, companies are trying to create products personalised to the consumer and tailor made.

“Your pets will have a personalised wellness plan. If you don’t do that and rely on the old ways, you will be spending in the wrong place and still your cost will go up,” he said.

So where are consumers spending?

According to data from Deloitte, since 2005, total retail spending in the United States has risen by about 13% to around US$3 trillion annually. The retail market has been growing and continues to expand. In fact, in 2017, retail grew a healthy 2.3%. However, per capita retail spending remained flat for the most part of the period, meaning that population growth, rather than greater spending per person, was the primary driver of the increase in spending.

Population growth, rather than greater spending per person, was the primary driver of the increase in spending.

The share of wallet data over a 20-year period reveals somewhat consistent spending across most consumer categories in the US especially across food, alcohol, furniture, food away from home and housing. For consumers under 30, spend on entertainment declined from 5% to 4% of the total wallet. A notable dip, however, came from the apparel industry where spending as a percentage of the total wallet was cut in half, declining from 4% percent to 2%. 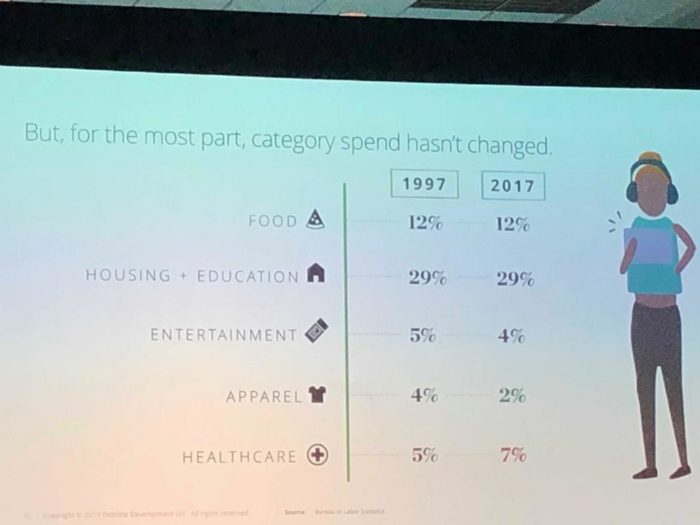 Interestingly though, the report said there has been a continued increase in the number of units of apparel sold, consistent with the overall rate of growth in retail. Apparel spending by age cohort shows a similar trend, with a similar decline in share of wallet in the category irrespective of age cohort. The data reveals, said Deloitte, “a deeper story of deflationary pressures on apparel unit prices, with a significant downward trend in revenue per unit”.

Salesforce paid for the journalist’s trip to Salesforce Connect, Chicago.

Fairfax Business Media in Asia will remain untouched by the job cuts and the restructuring happening in its Australian operations,..

He takes on the role of executive creative director, overseeing the creative duties of the agency group...