Tiffany & Co. is once again looking to paint the town its iconic blue after creating a big buzz in August last year for bringing Breakfast at Tiffany’s to life. The jewellery brand will be placing benches across Singapore in line with the launch of Tiffany True collection. The first bench has already been spotted along Orchard Road.

Adding a social element to the campaign, Tiffany & Co. will be handing out ice cream cones for those who post a picture of blue benches that will pop up at various locations in the coming days. Hashtags such as #TiffanySingapore and #BelieveInLove are also encouraged to be used in the social posts. Customised love poems are also available to all visitors. The campaign also runs across Instagram and YouTube.

The jewellery brand has created an event on its Facebook page, updating the dates and locations of the blue benches.

According to Tiffany & Co.’s Facebook post, it was revealed that the benches will be set up around Clifford Square, ION Orchard, Ngee Ann City, Gardens by the Bay, Marina Bay Sands, Singapore River and Sentosa Cove

In a statement to Marketing, a spokesperson said these locations were curated as part of the brand’s exploration of modern love.“In contrast to the original Tiffany Setting, Tiffany True is a more modern interpretation of the same ultimate expression of commitment. The Tiffany Setting is incredibly revered, and has been around for over 130 years. Tiffany True is a next generation symbol of love and commitment, the next chapter into the future. It gives people a different choice that’s equally inspired and equally special,” says Reed Krakoff, Tiffany & Co.’s chief artistic officer. 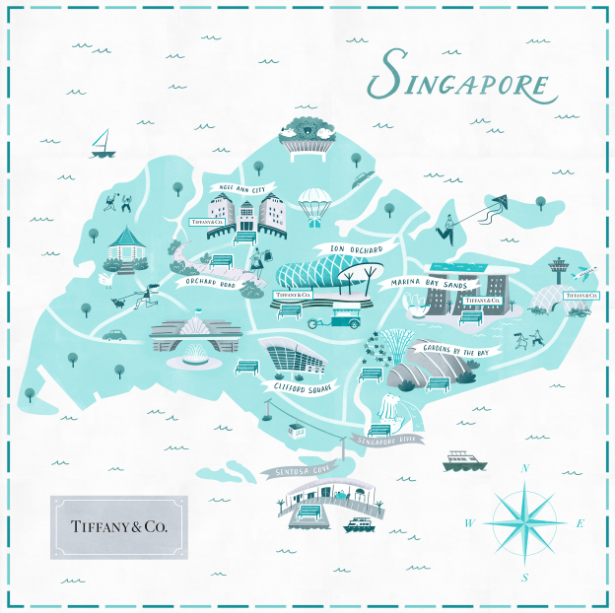 Last year, Tiffany & Co. partnered with local bakery brand Tiong Bahru Bakery, and unveiled a booth outside ION Orchard. Visitors were treated to free coffee and croissants, and encouraged to post a picture of the coffee cart with hashtags such as #tiffanypaperflowers and #tiongbahrubakery.  In addition, the campaign also saw Tiffany & Co. taking over Tiong Bahru Bakery’s flagship outlet in Eng Hoon Street, painting the outlet in its signature Robin egg blue colour. iris Singapore was involved in the campaign.

Read also:
Couture to cuisine: Why luxury brands are jumping on the F&B pop-up trend

Google moves its India lead to take over Persaud's duties...

Instagram looks set to take on SnapChat as it launches its newest app Bolt, a tool that allows you to instantly send pictures and ..

Being one of the first women named “China’s Women to Watch”, Marketing finds out the story behind the success of Elan Sho..

Gardens by the Bay picks Havas for media duties

The agency will handle Gardens by the Bay’s traditional media planning and buying, as well as support the brand’s digital media st..