Chinese New Year is a great time for brands to strut their stuff and to roll out themed campaigns that capitalise on the festivities. Red packets, or ang baos, are often one of the biggest ticket items when it comes to these campaigns as they are easily to distribute and will easily keep your brand in the minds of consumers.

“The wonderful thing about this custom is that you see a wide variety of businesses join the festivities; from banks and luxury labels to bakeries and car makers, any brand can participate in the festive fun,” said Danny Tan, the managing director of Grayling Singapore.

In fact, in some instances, industry players have told MARKETING-INTERACTIVE that the issuance of red packets is a battle for brands to get noticed and chosen. At the end of the day, the objective of the brand is to get selected to get good fortune, so that it finds itself directly placed in the hands of one consumer, passed on from another. With each transferal, the brand hopefully benefits from positive associations of wealth and good fortune, said industry players.

However with so many brands participating in this festive tradition, it was really hard for the team at MARKETING-INTERACTIVE to pick out our favourites. But after much deliberation, these are the ones we settled on. Check them out below. The quirkiest ang bao of the season award certainly goes to DSTNCT with its funky take on the year of the rabbit. Based off the theme “Bunnyverse of Madness”, the ang bao design  breaks away from tradition with wild colours and designs.

“Believe it or not, rabbits are surprisingly a common motif in pop and everyday culture. We wanted to pay homage to that. We sourced illustrations of bunnies mixed with vintage drawings and sequenced them across the 3 separate angpows with graphic typography that subtly spelled out DSTNCT. When laid side by side, the illustrations and type link up continuously, even when the angpows are flipped,” explained Matthew Zeng, the managing director of DSTNCT.

“There are a few easter eggs (no pun intended) going on here, that makes a nice conversation starter. How many different bunnies can you find? Can you make out the word DSTNCT? All in all, we just want to make the process of giving out angpows fun again for everyone,” he continued. Zeng added that he hoped that the quirky design would compel people to want to use them. 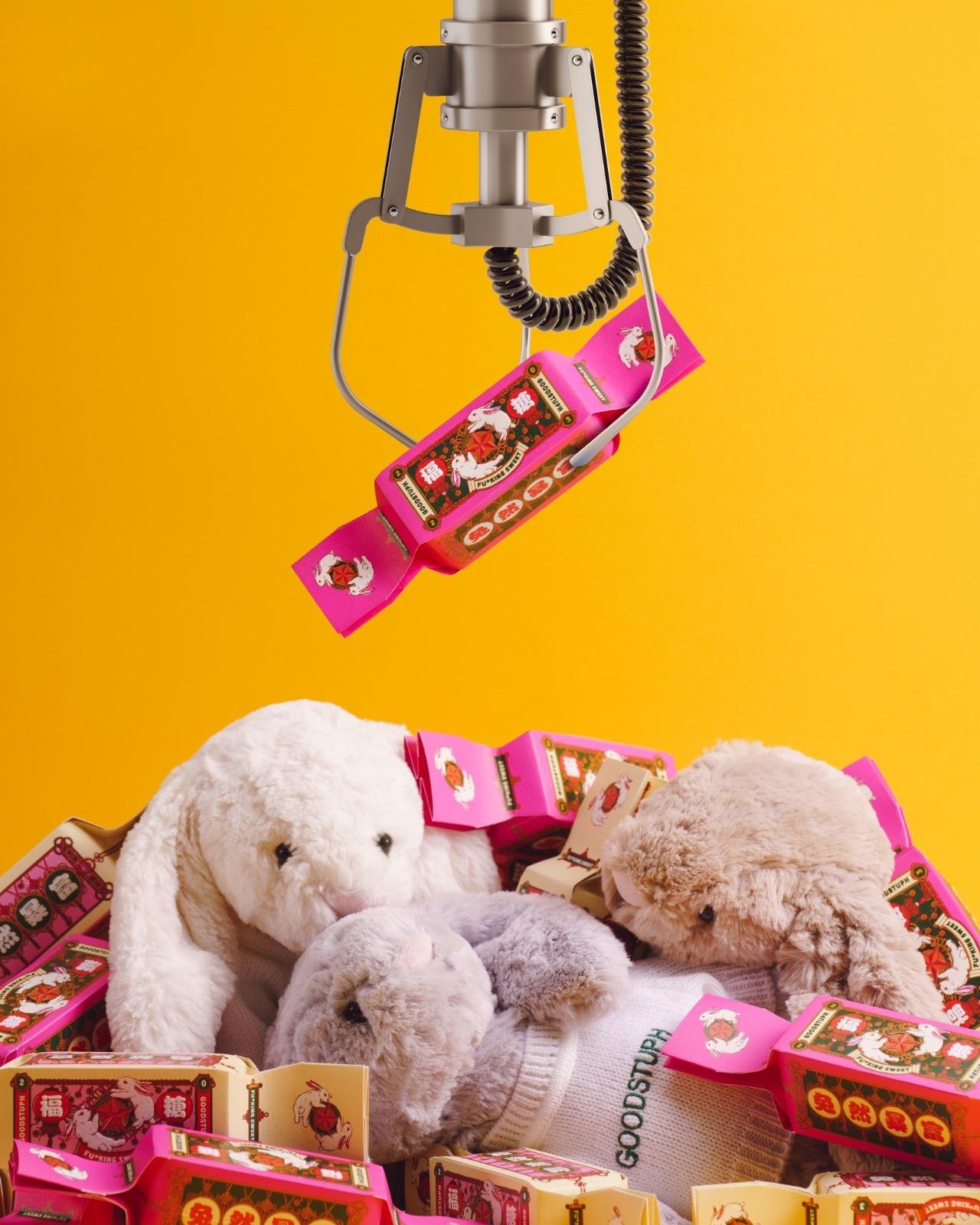 Quirky, bright and fun, GOODSTUPH never fails when it comes to unique ang baos. This year, the brand’s ang baos are all about taking it back to our childhood.

“For the year of the Rabbit, we wanted to pay homage to one of the sweet memories of our childhood, with a dose of our GOODSTUPH humour. As ambitious as it was, we felt the need to make our red packet 3D, to keep the integrity of our memory. Our Chinese New Year red packet is often sought-after during this festive period, and we take a lot of pride in the requests that we get from both our clients and our followers,” said Pat Law, the founder of GOODSTUPH. Did you know that besides being a communications consultancy, the Grayling is a species of fish that is native to European waters, where the brand has continued to grow since 1981?

This was the inspiration for the PR firm’s sleek pink and navy blue ang baos which are a hot favourite of the MARKETING-INTERACTIVE editorial team this season. “The illustration was accompanied by two Chinese idioms signifying abundance and harmony, tastefully designed by our in-house designer Tang Shuqi,” said Tan. “Giving and receiving red packets is a highly-regarded Asian ritual specific to this season, and a way to share good wishes, fortune as well as an expression of love to family and friends. As a brand that caters to a largely Asian audience, this is a special custom that we want to share with our community, and empower them to share their blessings with their loved ones,” said Vanessa Yeo Barger, the vice president of the brand.

“This year, we themed our red packets ‘Abundant Joy’ to embody the spirit of family reunions and to celebrate the heart of the season - the home, people and things that make up the foundation of our lives. The theme is a symbolic nod to being surrounded by good elements, in the many ways we define it. This is expressed thoughtfully in every step of our design process where focus is being placed on the symbolic meaning of the patterns and motifs and how they translate into well wishes to the intended recipients,” she continued.

For the minimalist giver, Maad Creatives’ MAAD ORIBANI is sure to be a crowd-pleaser. Capitalising on sustainability and the fun of origami, the ORIBANI can be folded into a 3D rabbit with two sets of stickers that you can use to personalise your festive friend. When you are done with it, you can display it to extend its lifespan.

“Chinese New Year is a time for giving and receiving red packets. These small gifts are a symbol of luck and prosperity for the upcoming year. But for many, the red packets are quickly discarded after the money is removed. I wanted to give the red packet a second life, and thus, the Oribani was born,” said Max Chionh, the creative director of MAAD Creatives.

“The name "Oribani" is a combination of the words origami and bunny, perfectly encapsulating the concept of this red packet. Not only does it serve as a traditional symbol of luck and prosperity, but it also serves as a fun and interactive craft that can be enjoyed even after the red packet has served its primary use,” he continued. “In a world where material possessions are often disposable, the Oribani offers a refreshing change of pace. It's a red packet that not only brings joy in the moment, but also encourages individuals to think outside the box and be creative. The Oribani is a perfect example of how a small change in design can make a big impact in the way we think about traditional customs." Good design doesn’t have to be complicated and Moove Media proves that with its simple but effective design. The pink packet features a yellow silhouette of a rabbit with a pom pom as a tail. A more sparkling red version features a bit of a "magical tie-it-yourself" ribbon, revealed with a simple pull. "I wanted to give people the opportunity to create a little magic themselves," said Jayne Kwek, the CEO of Moove Media. Moove Media also sent clients a basket full of goodies comprising a bunny handbag, towels, and oranges. Way to wow the team! Many people will tell you that there are a multitude of customs that come with the gifting and receiving of red packets. From how much you should give to not opening the packets in front of the person who gave it to you, there’s a lot to remember. However, sometimes, you just want to give a festive gift without all the fuss. For that, SGAG and Hepmil Media Group has your back with a cheeky ang bao that cuts right to the chase.

“Many Singaporeans would be familiar with SGAG and our brand of cheekiness. This year for Chinese New Year, together with our parent company Hepmil Media Group and our sister companies across the region, we decided to break the mould of traditional ang baos, and incorporate our signature cheekiness into the physical experience of our hilariously-designed red packets for our community to join in the fun,” said Adrian Ang (or Xiao Ming as he is often referred to as), the co-founder of SGAG.

“The inspiration behind our cheeky ang baos was based on the open, but unspoken truth that we have always secretly judge the amount of love a person has for us, by the amount of money they give in the ang bao. Thus, our specially designed ang baos with the phrase “I LOVE YOU THIS MUCH” is going to leave nothing to imagination with the inside of the word “THIS” deliberately cut out, giving the receiver a big sneak peek of the dollar notes inside the ang bao as an indication of THIS is how much they are loved,” he said.

“For people who wants to be even cheekier, they can always put an SG$2 note in front but a SG$50 note at the back just to play with the heart and mind of the receiver. Disclaimer: Do this at your own risk. We are not liable for any burned friendships or relationships,” he continued.

Related articles:
These ang baos from local brands are our favourites this festive season
How STB ensured Singapore stays top of mind for Chinese tourists even before the borders opened
Getting ready to stuff those ang baos? Know what you'll be making this year before you start