The disastrous IT failure at British Airways (BA) that ruined travel plans for more than 75,000 has sent the company's reputation and share value into a sharp dive, and its poor communication is surely not helping.

The airline's parent company, International Airlines Group, saw a drop in stock of more than 4% on Tuesday; it finished the day down 0.41% on Wednesday.

Analysts at Citigroup estimated that the IT problems could cost British Airways around EUR 100 million.

According to YouGov Brand Index, which measures consumer perceptions of brands, BA’s "Index" score, which is a combination of metrics including quality, value and reputation, has also plummeted. It dropped by a statistically significant 9.5 points over the past week on a list of the UK’s 28 biggest airline brands. 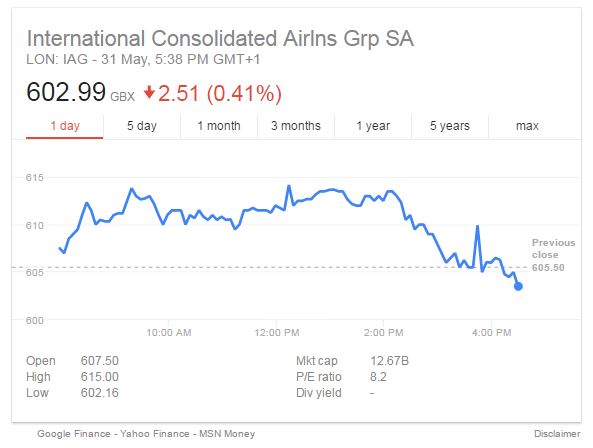 The chaos all began when the airline's computer systems went down on Saturday(27 May 2017) and there was no functioning back-up. UA cancelled all flights and only managed to resume full version Tuesday(30 May 2017), with thousands of passengers now still without their bags.

In response to the turmoil, Alex Cruz, the chief executive and chairman of British Airways, said sorry a couple of times through three videos BA released on social media as well as its online press-room, yet he has refused to be publicly questioned and declined calls to step down.

According to The Daily Mail, he had even emailed staff members, urging them not to comment on the meltdown as the company "are not in the mode of 'debriefing what happened' but rather 'let’s fix this mode'.

…If you do not want to get involved or cannot get involved, I would kindly ask you to refrain from live commentary, unless it is a message of support to the thousands of colleagues that love BA as much as you do.

- Cruz in his letter to the UA staff members.

Angry Twitter comments revealed that unclear organisations and explanations had left thousands of passengers stranded in airport terminals. Many waited hours for just a Twitter response, and some passengers were unable to call its customer services centre, or were directed to a phone line that costs at least 50p (HK$5) per minute when called from a mobile phone.

BA were a disgrace today. No staff at Gatwick to talk to, no information being given to us & no way to contact as no calls being answered.

Adding fuel to the fire was the airline's announcement on Monday, which said passengers who gave up on waiting in airport queues or on hold to the call centre were not entitled to the airline's coverage of the cost of additional tickets.

@British_Airways are already refusing to pay onward travel you've booked yourself rather than wait in their 11 hour queue.

The airline has now reportedly soften its approach, saying it will look "on a case-by-case basis".

Cruz, as face of the organisation, should step forward and take action to address any concern, according to Tony Chow, director, creative and content marketing, Asia Pacific at Marriott International.

"If you choose to issue any response by social media or videos, the very content you present must to address the core of the crisis, and be prepared to receive further reaction and be publicly questioned," he commented. "I could think the CEO should call for a press conference instead of the video messages which failed to pacify the situation."

In the first place, Casey said the information released by BA is believed by many to be incomplete, yet customers expect full transparency when a problem occurs - how long the problem would last, why it is happening, and the structural changes that the brand would made, both operationally and culturally. Casey said users expect the brand to explain how they would get back in control as soon as possible.

Although the brand explained the cancellation was caused by a worldwide IT systems failure, people familiar with IT will know it's not usual to experience such destruction in a well-established company like BA. Such suspicions will destroy trust fundamentally, Casey explained.

"Either people would question if it is something else, for example, if the system is being hacked, and that BA is forced to shut down the whole IT system; or they will suspect BA had over-cut its IT budget. These two suspicions lead to concerns: could BA's quality and maintenance be affected by the IT meltdown?"

Trust is fundamental, especially when it comes to an airline company. Customers do not want to fly on a system they believe is not safe or trusted.

Vincent Tsui, chief marketing officer at Next Mobile Ltd, agreed that BA should clarify speculations as soon as possible. "It would solve many problems if they could clarify that the chaos has nothing to do with BA, and they have yet to formally respond."

However, Tsui said it is understandable for Cruz to refrain from being publicly questioned, and asked front-staff to keep silent.

"The larger the corporate is, the harder it is and the longer it takes for the CEO to understand which part went wrong in a catastrophic event," Tsui explained. "It's better though, if the chief can give a clear and concrete timeline on the steps that BA will take. For instance, he could say they will undergo a deep investigation on the issue and report two weeks later, so concerned customers and investors know what to expect."

Furthermore, Tsui suggested BA explain its compensation through an FAQ on social media as soon as possible, as it would answer most of the passengers' inquiries and help lift the busy customer service team's burden.

Saying sorry is not enough

"Going forward, people will still take British Airways, but it would be harder for the brand to charge a premium, with customers no longer feeling inclined to pay extra for the airline's claim of quality," said Casey. "The two remedies they should take now is to be over-communicating and over-compensating: being especially open on the information they have and the time BA would need to get the problems resolved, and make it up to the people most affected."

"Sorry would not be enough - BA will have to invest in showing they are taking the crisis seriously."

Drawing reference from Toyota's vehicle recalls controversy between 2009-2011, which demonstrated a change in both culture and production line, Casey advised BA to show they are revamping its leadership and customer services to prove it is still a world-class airline brand.